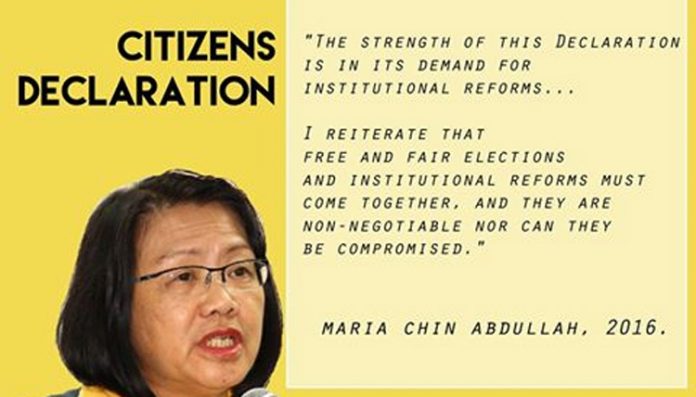 The institutional reform points in the declaration are in line with what Bersih 2.0, NGOs, and Malaysians have been demanding for many years, says Maria Chin Abdullah.

I am pleased to be a signatory of the declaration that was presented today. This is done in my personal capacity as an activist and concerned citizen of Malaysia because the invitation was on the basis of individuals.

The strength of this declaration is in its demand for institutional reforms, because this is the only way to ensure that the interest and rights of all Malaysians will be protected.

The institutional reform points in the declaration are in line with what Bersih 2.0, NGOs, and Malaysians have been demanding for many years. These reforms include:

The reforms in the declaration are also based upon the need to ensure a free and fair election process, including ensuring that the Election Commission is independent. I reiterate that free and fair elections and institutional reforms must come together, and they are non-negotiable nor can they be compromised.

In fact, the demands in the declaration are similar to the institutional demands of our previous Bersih 4 rally in August 2015, which was attended by over 500,000 Malaysians. I am pleased that the demands made by Bersih 2.0 are now being accepted by a wider range of groups across different political divides. Bersih 2.0 has always believed and I strongly believe in working with all parties that support democratic reform.

Subsequent to this signing, we will undertake programmes to democratise the declaration by consulting and discussing further with the endorsing NGOs and our supporters.

Lastly, I reiterate that the need for free and fair elections as well as institutional reforms is presently the most important agenda and cannot be compromised. Beyond this declaration, there must be strong political will and efforts to implement these reforms in the interest of all Malaysians.