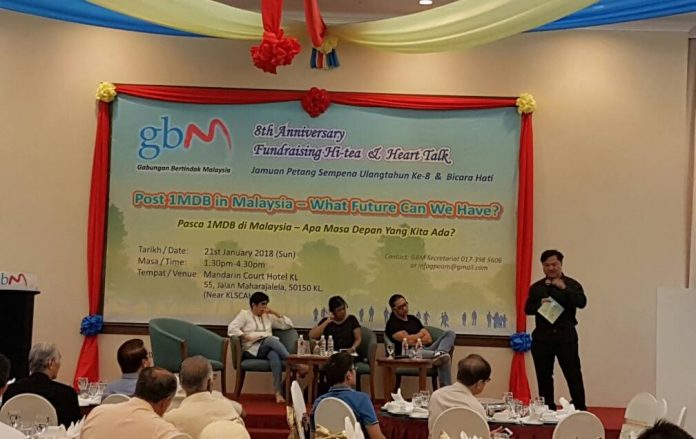 The fundraising event has been held biannually. This year it was held in conjunction with GBM’s eighth anniversary since its formation in 2010. Based in Kuala Lumpur, GBM is a non-partisan, multi-ethnic, multi-faith coalition of 27 civil society organisations of varied backgrounds located in various parts of Malaysia. [Aliran is part of GBM.]

In his opening speech, the GBM chair Zaid Kamaruddin called upon all voters to exercise their rights as citizens to vote in the coming general election this year. He also called upon all political parties to commit to inclusive national unity as their key policy, to cease all forms of gutter politics and to reject all forms of corrupt practices. GBM will soon formally issue a statement on the coming general election.

Zaid stressed GBM’s aim to move society forward “from discord to harmony” by upholding diversity, which has been a blessing and not a problem for Malaysia. Our country should take advantage of its historical and current links to and influence of Nusantara, Middle East, China, India and the West to face the challenges in this increasingly competitive age of globalisation.

Zaid revealed that GBM had raised RM266,000 in this function which would fund the coalition’s programmes and operations for the next two years. The funds will also be used for GBM’s five-year plan to build and expand its programmes such as the setting up of a youth wing, the strengthening of the coalition’s social media strategy, and the holding of monthly roundtable discussions.

READ MORE:  Pakatan must project hope before providing hope
Support the struggle to build a Malaysia based on Justice, Freedom, Solidarity:

A forum entitled “Heart talk: Post-1MDB – What future can we have?” was held during the event. The speakers were former Bar Council chairperson Ambiga Sreenevasan, Penang Institute fellow Wong Chin Huat, and University of Malaya law lecturer Azmi Sharom. The talk was moderated by human rights activist Masjaliza Hamzah.

The speakers shared their thoughts on the current challenges faced by our country and how we could move forward from the current conundrum. Though each of the speakers had their respective unique perspective to approach and present the issue, they seemed to agree that all hope had not lost and there should be a better future in store for all of us if Malaysians keep on their fight for a better Malaysia.

Donors and guests of the event were also entertained by stand-up comedy and dance performances. A montage displayed GBM’s activities over the last two years.

At the end of the evening, event organising chairperson Stanley Yong thanked all donors, GBM’s member organisations and their members, the executive committee, supporters and staff, and all those who had assisted in making the event a success, including the volunteers, performers, speakers, moderator and emcee.