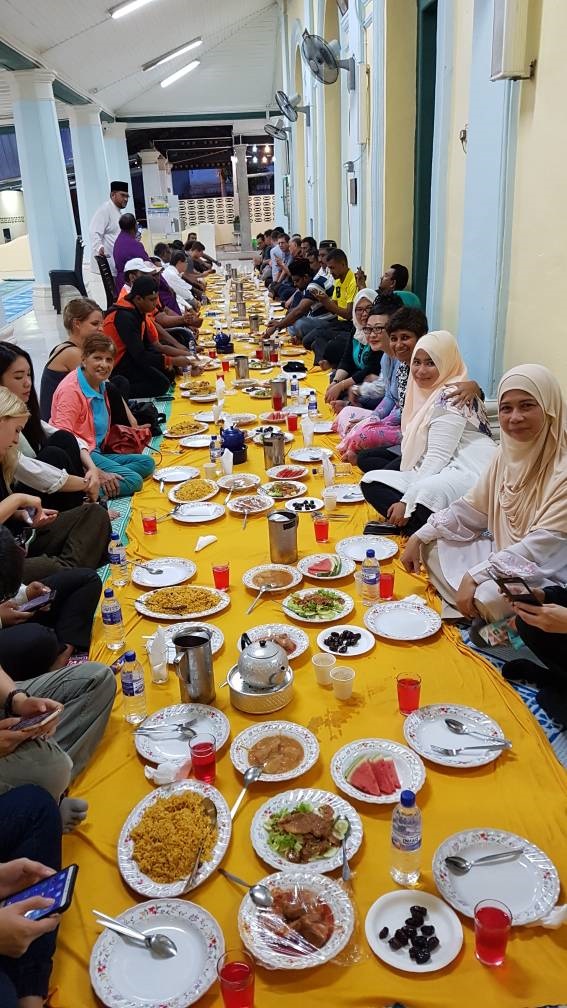 People of other faiths joined in solidarity with Muslims who were breaking their fast at the historical Acheen Street Mosque in Penang this evening, reports Anil Netto.

The group of about 60 participants led by representatives of major faiths had earlier walked from St George’s Anglican Church, stopping along the way at the Goddess of Mercy Temple and the Kapitan Keling Mosque, passing by the Mahamariamman Temple as well. The 800-metre long road, Jalan Kapitan Keling or Pitt Street, is also known as the Street of Harmony, given the peaceful coexistence of a diversity of religious and cultural traditions along the route.

The group were taken on a tour inside the Kapitan Keling Mosque, completed in 1801 with Mughal moorish architecture, and the Acheen Street Mosque, where they joined in the buka puasa event. At both mosques, they were given a warm welcome.

Before the breaking of fast, the friendly imam of Acheen Street Mosque, Muneer Farid Al-Hafiz, a former student of nearby St Xavier’s Institution, welcomed the crowd with a broad smile. Holding his staff, he clambered onto a 210-year-old raised wooden imam’s chair, which bore something resembling a Chinese motif, to demonstrate how khutbah or sermons were delivered.

The mosque itself was buildt in 1808 on land donated by a trader from Acheh. The imam explained that the plaster on the pale yellow wall inside had been mixed with egg yolk, which apparently helps to cool down the interior. At the back of the mosque lies an ablution pool, built in the traditional style, next to an ancient well that ensured the community was self-sufficient in water supply.

Mujahid then addressed the gathering: “In the midst of a troubled world and the rise of bigotry and xenophobic tension and extremism locally and internationally, a group of different faiths gather today as a show of unity and strength to defy the growing radicalism of faith and race.”

He spoke about the five values that are the essence, the characteristics of a real Muslim.

All the photos here.