Home Events Vigil in Penang in solidarity with Rohingya; updates from ground zero 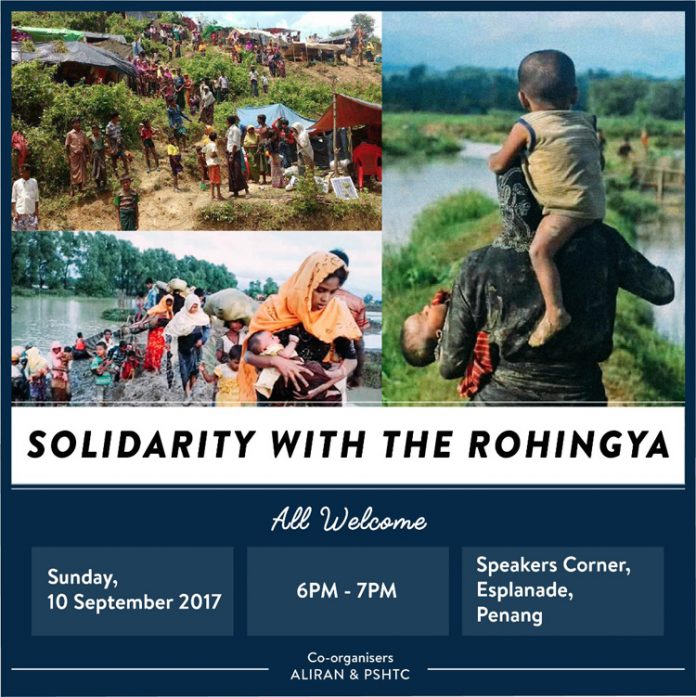 Aliran and the Penang Stop Human Trafficking Campaign are holding a solidarity vigil for the Rohingya on Sunday, 10 September 2017 at 6pm. We hope those of you in Penang will be able to join us.

Meanwhile, the Penang Stop Human Trafficking Campaign brings us updates on what has been happening in Arakan state:

We present here most recent updates from the ground in Arakan state, Myanmar and from Rohingya who have made the journey into Bangladesh. These are updates that have been received verbatim through contacts.

We are well aware that people will demand verification and will view any or all claims with scepticism; we present them without comment; we know the Myanmar government’s present tactic is to say that it is all rubbish and that the Rohingya are burning their own homes and are the author of their own catastrophe.

We side with those calling it a genocide. The history of the last 50 years is one of continual denial of the Rohingya their identity, their citizenship rights, any protection, and (not for the first time) confiscation of land and possessions, destruction (burning or otherwise) of their property, forced displacement and in far too many cases, their lives. Violence has been a feature for many, many years; this recent violence continues the most recent escalation which began in October 2016.

You will be aware that despite denial that anything untoward is taking place, Aung Suu Kyi and her government has continued for some time to deny any independent monitoring in the area. You will also be aware that the UN Special Rapporteur has indicated that crimes against humanity have almost certainly been committed, including by the military.

Elsewhere there are many media and other reports from a wide variety of groups and media of the genocide taking place, which demands our immediate and urgent response. For example, the media are beginning to report massacres of civilians, such as that at Tula Toli. Please, please do what you can to stop the violence, urge those with power and influence to stop the violence, to get humanitarian aid in to the areas, and to look for longer term solutions. The recent Kofi Annan Commission Report on Rakhine is a good starting point.

We have report after report adding up to the fact that the systematic clearing of the Rohingya in Rakhine state of Myanmar is continuously going on. We are getting continuous reports of mass killings and villages are being burned to ashes on a daily basis.

The villages that are still remaining unburnt in Buthidaung and Maungdaw townships are empty. People have already fled. They are mostly in the mountains now. For example, the whole sub-township Taung Phyu is empty. This has affected about 80,000 people. Several thousands from three townships in that vicinity are at the border waiting to cross into Bangladesh.

6am: A group consisting of about 1,000 Myanmar military, BGP and Rakhine extremists has been besieging Bagonna East hamlet in Southern Maungdaw South since 5.45am.

10am: Myanmar military are torching Kyauk Pandu village in Southern Maungdaw again and attempting to attack Rohingya villagers taking refuge in the mountains.

10.15am: Rohingya homes at Mangala village of Quarter 3 in Maungdaw have been set ablaze by the Myanmar BGP and Rakhine extremists.

11.30am A motorcycle shop owned by Yusuf (s/o) Shomshu, a Rohingya resident of Quarter 5 in Maungdaw, has been looted by Rakhine extremists. The shop was burnt down after looting.

2pm: The Myanmar military set fire to Rohingya houses at Zedi Pyin hamlet of Kyauk Pandu village in Southern Maungdaw at 8am.

1pm: We received a report that the Myanmar military brutally slaughtered a Rohingya school teacher in front of his 12-yr-old son at Maung Nu hamlet of Chin Thama village in northern Buthidaung on 27 August.  After that, the military molested his wife and plundered his home. The victim is identified as Salim, 35.

We were among many who received a chart cataloguing the number of villages burnt to date, how many people were affected, and how many people were killed. The systematic clearing of a 10 square mile radius is indicated, with village after village being torched. This is in Northern Buthidaung alone (see  https://goo.gl/g41EPj).

We received reports that the Myanmar military claimed that they had provided aid to the (Rohingya) villagers at Pantaw Pyin village in southern Maungdaw on 1 September. They did give the villagers packets of rice and food rations but we were told that these were then seized back once photos had been taken and published on the military/government pages.

Similarly, Myanmar authorities are reported to have ordered the Rohingya villagers at Quarter 2 in Maungdaw downtown to offer Eid prayer this morning. And the government officials filmed them while offering prayers, to show how wonderful they are.

Nine Rohingya leaders were arrested by the Myanmar military at Aan Daang (Inn Din) village in southern Maungdaw on 1 September after they were called on pretext of a meeting. They have been detained at the Buddhist monastery in the village. The villagers fear that the military will kill them.

Nine Rohingya houses were set ablaze by the Myanmar military at Quarter 6 of Myint Hlut sub-township in southern Maungdaw on 1 September.

This afternoon a house was plundered and torched by the Myanmar military. The house belonged to Dolu (s/o) Hashim, 30.

At 3.30 pm today, the remaining Rohingya houses were set alight in Myin Hlut village south of Maungdaw, and the military and police reportedly rounded up some 100,000 Rohingya from the forest area where they were seeking refuge and brought them to the beach in Myin Hlut village. Young women are said to have been segregated from the group and kept in the forest by military and police.

3.30pm: The Myanmar military are setting fire to Rohingya homes at Kyaung Taung (Gora Khali) in southern Maungdaw. And in Myint Hlut village.

6pm: The Myanmar army are torching the Rohingya houses at Maung Nama and Phawat Chaung in Maungdaw.

At 12.46pm today, the military are reported to have launched air strikes on the forest in Thin Baw Kwe village south of Maungdaw where thousands of people from 30 villages had been taking refuge with no food for more one week now. All of them are reported as believed killed by the air strikes. One figure has over 200,000 people; others have considerably more. (Let us pray this is not true.)

Goinna Fara hamlet of Shwe Zar village was set on fire this morning, next to Maungdaw township in the north, near to Maungdaw downtown

We are receiving many photos and videos, as have many groups and media. Today we had a horrible photo of two charred bodies, reported to be of Idris s/o Abdu Rahman, 25, and Ilyas s/o Ahmad Hussein, 20. We are told that a group of Rakhine mob and military encountered these two young Rohingya men at around 11am after Eid prayer in Bat Kar Gone Nar village on Saturday and the Rakhine mob and military forced them into a house where they slaughtered these two men before they burned them.

At 1.30pm on Monday, we are now getting a report that the Myanmar military came from the side of Bat Kar Gone Nar village and torched Nurullah village south of Maungdaw. A video gives us the sound of the helicopter and we can see it flying over that village.

An unknown number of Rohingya houses were burned down by the Myanmar military, police and Rakhine mob in Kyauk Pyin Seik village, north of Maungdaw.

We received a report that the police chief in sector 4 held a meeting with the village administrators from the villages that are not burned yet. The police chief is said to have ordered the Rohingya village administrators to ask Rohingya people in the village to set fire to their own houses, wearing face masks so they can be portrayed as Arsa members. These photos are then uploaded by the military as ‘proof’ that the Rohingya really are burning their own homes.

The police chief threatened the village administrators with mass killings and arson like they have done to other Rohingya villages if they fail to follow his order. We can see such photos on government websites; we also have been told that the government forces use Rohingya look-alikes (Hindu or Maramagyi) to burn the homes. We leave it to you to decide who is telling the truth; as we say in the introduction, the evidence of (recent) history may help make this clear.

The above reports are as received by the Penang Stop Human Trafficking Campaign
consolidated on 7 September 2017. Many other groups are also receiving similar reports