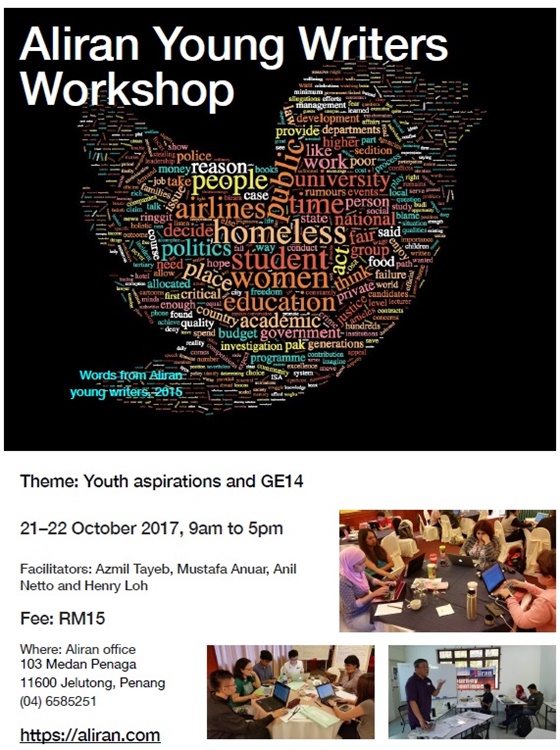 Aliran invites young people aged 18 to 35 to participate in our Young Writers Workshop in Penang on the weekend of 21-22 October 2017.
The 14th Malaysian general election is coming soon.

The signs are apparent as opposition political parties start to squabble over seat allocations and coalition partnerships while the BN-controlled government begins to ramp up development aid to rural areas and other strategic constituencies.

In recent years, both sides of the Malaysian political divide have engaged in crass populism as a way to win electoral support. The Pakatan Rakyat manifesto in the last election was replete with promised populist goodies such as abolition of student loans and highway tolls, reduction of car prices and free education. The BN government similarly engaged in populist campaigning such as providing BR1M cash assistance.

Even though young people (aged 15-29) make up about a third of the Malaysian population, both sides seem to pay scant attention to their needs and aspirations, besides making unclear token promises of free education and abolition of student loans. No wonder we can see the rise of political apathy among this age group as these young people feel neglected and unappreciated by the political elite on both sides of the divide.

Political apathy does not mean that young people have completely shunned politics. They can be acutely aware of the issues we face as a society but do not see engaging in party politics, even voting, as a means of tackling these issues.

This workshop will focus on stimulating discussions and ideas about what young people can do to be heard and to effect changes in the upcoming general election.

Workshop participants will spend the first day honing their writing skills and techniques including how to tailor their writing to a particular readership and get their ideas across in a clear and coherent manner.

Participants will spend the second day writing while facilitators will be on hand to guide them. The first drafts will then be presented to the other workshop partipants for their views, before they are further amended. An experienced writer will also review the drafts and provide constructive ideas on how they can be improved. Polished versions will then be published on the Aliran website, subject to editorial clearance. Have a look at the work of the young writers from our previous workshops.

To register, fill up the online form below. If you don’t see it, click here.