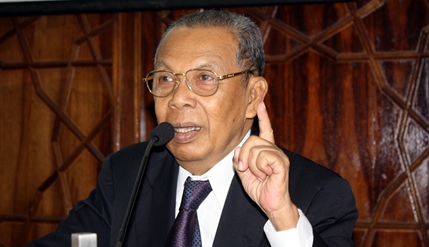 One would expect logic and common sense from someone who was the Chief Justice of Malaysia.

One would expect sobering comments and measured criticism from someone with a well-grounded educational background. But we are very disappointed with his jaundiced views and communal venom.

Unlike the previous retired Chief Justices of Malaysia, Tun Abdul Hamid Mohamad has foolishly chosen to dabble in politics and talk nonsense.

His views are bereft of common sense and his comments are so vitriolic that he threatens our communal harmony which will undo our unity.

Hamid’s claim that “the Chinese felt they were stronger now because they were united behind DAP, and were beginning to make excessive demands and challenge Islam, including the Friday sermons” is dangerous, unsubstantiated and unwarranted.

Can he please elaborate what he means by stating “the Chinese felt they were stronger now because they were united behind the DAP”? Is he suggesting that every Chinese in the country has “united behind DAP” and had voted only for the DAP? Does he mean that the Chinese did not cast their votes for the Barisan Nasional at all?

READ MORE:  When question of language on school signboards is skipped

As for his accusations that the ordinary Chinese have challenged Islam, including the Friday sermons, he has exceeded the boundaries of decency. Which Chinese would dare challenge Islam or criticise the Friday sermons if they were religious in nature calling upon the faithful to live up to the virtues of Islam?

The position of Islam is entrenched in the Federal Constitution, and this should be pretty clear to him, as the ex-CJ. As such, how can Islam be challenged? Which Chinese was foolhardy to challenge Islam, pray tell?

Continuing his silly narrative, he commented that the Chinese “actually want to take the rights of the Malays without sacrificing their own rights”.

The special position in the Federal Constitution safeguards the position of the Malays, and this cannot be revoked without two thirds of members of parliament voting in favour of such a move.

Article 153 of the Federal Constitution of Malaysia preserves and protects the special position and privileges of the Malays and the Bumiputera of Sabah and Sarawak.

Others provisions protecting the special position of Malays are contained in Articles 86 and 90 relating to Malay reserve land, which is protected from the non-Malays.

With such safeguards entrenched in the Federal Constitution, to rant that these will be taken away from the Malays is a mischievous attempt to hoodwink and mislead the Malays. What he is talking is rubbish!

He raves that the “DAP will destroy the rights of the Malays and Islam’s special position if it gained power”. This is utter nonsense! The demography of Malaysia is such that it will NEVER be possible for the DAP to gain power. The Malays form more than 60 per cent of the population. How on earth can the DAP gain power to deny the Malays their position and privileges?

READ MORE:  After Malacca and Sarawak, will the opposition wither?

His comments are defamatory, provocative and inflammatory.

Will the AG act?

Will the PM take him to task for threatening our harmony?