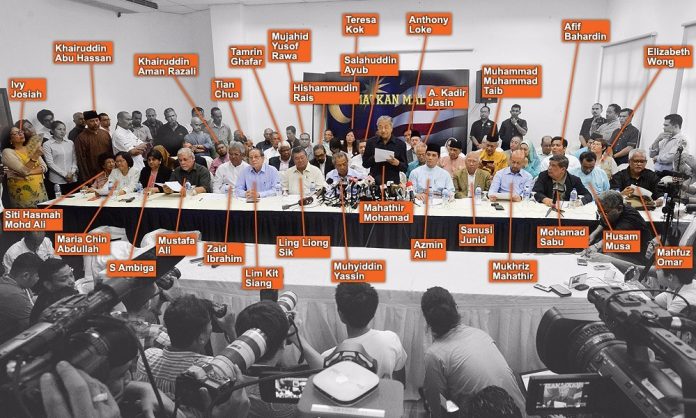 Aliran congratulates former prime minister Dr Mahathir Mohamad and other Malaysian leaders for putting aside their differences and coming together to call upon Najib Razak to step down as prime minister in order to save the nation.

The ‘Citizens’ Declaration’ they signed calls for ushering in institutional reforms to prevent leaders from repeating such abuses.

Never before has any Malaysian leader been accused of such alleged widespread corruption. These allegations are the result of thorough investigations by journalists of the Washington-based Wall Street Journal and of the UK-based Sarawak Report website. Partly as a result of their efforts and following their own investigations, the United States, Swiss, Singaporean and Hong Kong authorities are probing the case for any breach of financial laws in their respective countries.

These allegations are related to the massive debts that have been accumulated by the sovereign fund 1MDB of which Najib is its advisor; the transfer of up to US$1bn into Najib’s personal accounts; and the claim that these transfers were actually ‘donations’ from the Saudi royal family and that most of the funds have been returned to the donor.

The coming together of Dr Mahathir and other leaders is reminiscent of what happened in Indonesia on 5 May 1980, when a group of leaders launched their ‘Petisi 50’ to protest against Suharto’s use of the state philosophy Pancasila against his political opponents.

Suharto, Petisi 50 declared, was not the embodiment of Pancasila and had no right to be its sole interpreter. Indeed, Pancasila was above Suharto, and he should not have abused the state philosophy.

In retaliation, Suharto revoked his critics’ travel privileges and forbade newspapers from printing their pictures or quoting their statements. He also worked to deny them bank loans and government contracts.

Uncowed, Petisi 50 further called for restoring ‘negara hukum’ (constitutional government) and the rule of law and for getting rid of corruption.

Petisi 50 was not the first challenge to Suharto’s Orde Baru regime. The university students had come out to protest in 1974, in 1978 and in 1980. New NGOs were also pushing for people-oriented development and subsequently, for human rights.

The major Muslim groups, Muhammadiyya and the Nahdhatul Ulama, represented small and medium-scale businessmen and pushed for their business and other rights – as opposed to the regime’s nepotism for its own generals and big business, including the Chinese cukongs.

The significance of Petisi 50 was that it signalled a breach in the ranks of the elites. All of the 50 were formerly part of the ruling elite.

Perhaps this, too, is the significance of the so-called Citizens’ Declaration. It is actually a declaration by the dissident Umno-BN elites like Dr Mahathir himself, Muhyiddin Yassin, Mukhriz Mahathir, Shafie Apdal, Sanusi Junid, Ling Liong Sik, Tengku Razaleigh Hamzah and Daim Zainuddin expressing concern about the 1MDB scandal. Tellingly, they also recognised the need for institutional reforms.

But let’s not forget the ground work by opposition politicians, civil society activists and local journalists. Opposition MPs like Rafizi and Tony Pua, The Edge journalists, and unknown social media activists were the first to highlight the 1MDB financial fiasco locally. They, along with Bersih leaders and NGOs such as Aliran, had called for not only thorough independent investigations into 1MDB but also far-reaching institutional and systemic reforms.

Piling on the pressure, close to half a million Malaysians braved an order banning the official Bersih 4 T-shirts and participated in a massive rally last August, at which many urged Najib to step down pending the outcome of investigations.

Student activists too participated in an #OccupyParliament protest calling for Najib to resign and some were arrested.

Instead, Najib has shortcircuited serious investigations by dismantling the original task force comprising the original attorney general, the MACC and Bank Negara chiefs, and the inspector general of police. He has replaced the attorney general, to boot. His administration even blocked a slew of critical websites (including Sarawak Report and The Malaysian Insider) and introduced even more repressive laws.

For its part, Aliran monitored the repressive response through the Crackdown Watch list on aliran.com and launched an online petition calling for the websites to be unblocked.

For a while, however, it looked as if the Umno stranglehold on power was too entrenched and unshakeable – until yesterday, when the Citizens’ Declaration was signed.

Indeed, the declaration could prove to be a watershed development as it signals a major breach in the Umno-BN elite ranks. As the days pass, the momentum could snowball and it could have the same impact as Petisi 50 had in Indonesia a generation ago.