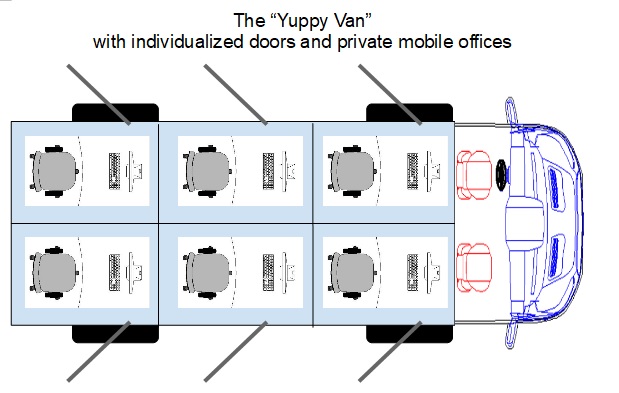 Perhaps solutions optimised for different segments of the community might have a great enough impact to reduce traffic effectively, writes Colin Chee.

The title sounds like an oxymoron and no, I am not talking about flying cars (yet).

But until flying cars become mainstream, could Malaysia produce vehicles to dramatically increase the number of people per square metre of road area without sacrificing too much the convenience of owning a personal vehicle?

Of course, mass transport vehicles do move more people per square metre. But there is a lot of resistance to them. The reasons include congestion during peak hours, inconsistent cleanliness, wasted time due to inconsistent schedules, poor protection against weather extremes at shelters and transitions and the extra burden of having to plan journeys on a daily basis.

It is indeed difficult to find generic solutions that tackle every sector of the community – but perhaps we do not need to. Perhaps solutions optimised for different segments of the community might have a great enough impact to reduce traffic effectively.

By looking at two key trends, we could perhaps optimise the solution for Penang Island:

Here are some out-of-the-box concepts to increase the number of people per square metre of road space comfortably.

Today’s ‘mobile’ workers could arguably save a lot of time by working on the bus. But this would cut into individual privacy. If I am working on my laptop, I do not want people around me to peek at sensitive data on my screen – or worse, to secretly take pictures of confidential information on my screen.

So for mass transport, instead of trying to maximise the occupancy of a bus, what if we compromised by providing more privacy and personalisation? Could the bus provide individual doors and private compartments?

What if when travelling, each passenger would not even know he or she was in a bus with many others. Each compartment could have a large screen monitor to which a laptop could be connected.

This would be a targeted mass transport mode from one township to two or three companies in the same region to reduce the need to zig-zag across many townships which only add to traffic. If a person is late for meeting, he or she could just dial in remotely.

This one vehicle would replace six on the road. It would be a dramatic six-fold reduction of vehicles during peak hours. Even if it were just a four-fold reduction, the impact could be significant.

For those who absolutely must drive their own vehicles, then let us have more people per square metre of roads using ultra-compact electric vehicles.

This concept is not new and has been widely experimented with. Two-seaters provide parents the option of dropping their children off at school enroute to work.

Most of the objections against such vehicles centre on their lack of mileage due to the small battery they carry. But again, Penang is small – travelling from one end of the island to the other will not need a lot of battery charge. At the moment, such vehicles are not autonomous.

But what if they were? Mobile workers could be logged-in on their laptops – being productive from the start, without having to worry about how long they would take to get to their destinations. That being the case, these vehicles would not need to be fast and could travel at safe speeds.

In the UK, the concept of “platooning” is being tested. Instead of a completely autonomous vehicle, where decisions are made by an “unreliable machine”, the first vehicle in a convoy of vehicles would be driven by a human. All the autonomous vehicles would tag along safely, one behind the other, communicating constantly through wireless communications and keeping a safe distance.

An autonomous vehicle such as the ultra-compact electric vehicle could be used to transport owner from his or her home. As the vehicle gets near one of these platoons, it would signal its intention to cut into the convoy. The other vehicles would then make way to let it come in and form a dynamically linked “train”.

Platooning allows vehicles to travel at much closer distances to each other, allowing more passengers per square metre.

The development of these concepts could be carried out in stages.

For example, the yuppy van could be quickly conceived as it is merely a souped-up luxury van.

Begin with the largest multi-purpose vehicle in the market and modify its internals to accommodate four personalised cubicles. Soundproof the dividing partitions and add mirrors to reduce claustrophobia. Test the market and develop an appropriate marketing strategy.

As for ultra-compact electric vehicles, get a quick headstart. License existing such vehicles and platooning concepts already available. Perhaps do a three-party joint-venture to marry the two concepts together.

Instead of being a “me-too” developer, could Malaysia not lead the development of such futuristic vehicles? Could we not export such vehicles to other parts of the world if we start now in earnest?

All these proposals will need major legislation, agreements between federal and local governments, and partnerships with foreign partners to work well. It will need a singularly focused leader or department to push it all through.

I believe the Penang leadership can do that. And with Penang being an island, would it not make sense to take advantage of that and propose a Grab-type water taxi? How about water robo-taxis?

Perhaps all these will buy us enough time until flying cars are made more viable. Any thoughts?

Dr Colin Chee received his PhD from the University of Hull, UK. He works as a radio-frequency integrated circuit designer and enjoys solving problems. He believes God has created this world for humanity to maintain and develop responsibly.