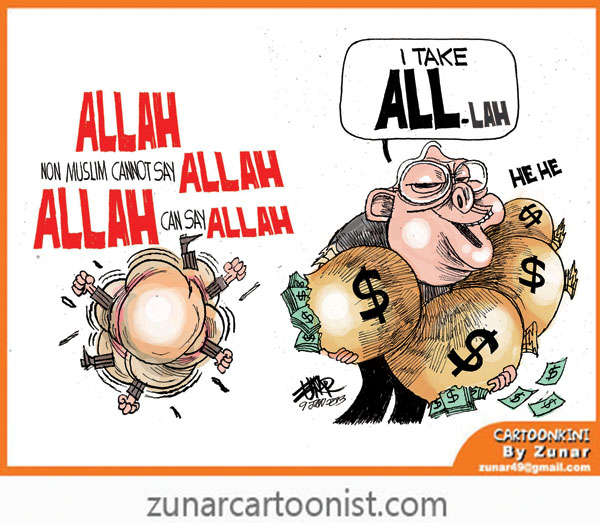 The question many are asking is what is the Prime Minister’s postion on this matter and when will he make his stand known, writes Henry Loh.

The report quoted Selangor Executive Councillor for Islamic Affairs Sallehin Mukhyi as saying, “Non-Muslims can use the word ‘Allah’ if it is not misused, such as for propaganda to spread other religions. If ‘Allah’ is used by Christians to spread their religion to Muslims, then it is not allowed.”

A written reply made in Parliament by Minister in the PM’s Department Datuk Seri Jamil Khir Baharom stated in no uncertain terms, “Not one Muslim applied to convert out of their faiths in the Sharia Courts over the past decade.” Hence the fear that non-Muslims would use the word Allah to confuse and convince Muslims to convert out of their religion seems unfounded.

But the ‘Allah’ controversy has been highly politicised and Muslim leaders from both sides of the political divide, no doubt out of political expediency, seem afraid to make a clear and firm decision on this matter.

This tendency reared its ugly head again when Home Affairs Minister Ahmad Zahid Hamidi backed Inspector General of Police Khalid Abu Bakar’s decision that the police would not interfere with the abduction of a six-year-old boy, Mithran, from his mother on 9 April 2014, saying it was a domestic dispute and that the boy’s father also had a Syariah Court order, issued some time last year, granting him custody of the children.

Former law minister and current Culture and Tourism Minister Nazri Aziz took a completely different position when he said that the abduction was a clear-cut case of kidnapping. His rationale was that the marriage between S Deepa and Izwan Abdullah (a Muslim convert) was at a civil registry and their children were born when both parents were still non-Muslims. He cited the Cabinet decision made in April 2009, when it decided that children be raised in the “common religion at the time of marriage” should one of their parents convert. Nazri’s view was supported by another ex-law minister, Zaid Ibrahim.

But the question many are asking is what is our Prime Minister’s postion on this matter and when will he make his stand known?

When it comes to issues like mismanagement, weak controls, non-compliance, dishonesty, greed and corruption, the Auditor’s General Report has consistently, year in and year outprovided a steady supply of such information. Hence it is not surprising that the Auditor General has made over a hundred recommendationsto plug weaknesses.

Those responsible for such blatant inefficiency, mismanagement and corruption should be thoroughly ashamed and if guilty be duly tried and charged in the court of laws. The sad reality is that many guilty ones get away with nothing more than a rap on the knuckles. Ramon Navaratnamtakes us through the depressing AG’s Report 2013 and makessome important recommendations there.

Meanwhile, Aliran has taken a clear stand in support of Major Zaidi Ahmad (photo above), who is facing a court martial for having made a police report on the poor quality of the supposedly indelible ink used during the last general election in May 2013. The good news is that out of seven charges proffered against the principled Air Force major, five charges had to be dropped because they were defective.

But he still has to face the remaining two charges on 10 June. We fully support the call that all charges be dropped and that Major Zaidi be reinstated to his job with full honnours and without any loss in seniority and privileges.

Finally, Aliran would like to record our full support, prayers and concern for the families of the passengers and crew of flight MH370. More than a month has passed, but sadly, we do not seem to be any closer to solving the mystery of the missing plane.