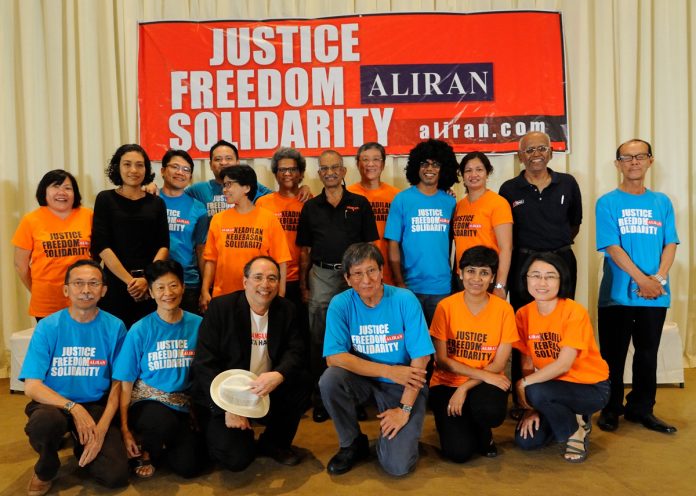 What an inspiring night it was at the Aliran bash on 11 October as drooping spirits were revived and the clarion call towards Justice, Freedom and Solidarity lifted all present. Henry Loh reports.

On 11 October, Aliran, held a fund-raising dinner at a hotel in Penang. The dinner attracted more than 500 friends, supporters and sympathisers and we wish to thank each and every one who came forward to make this occasion a success.

We would also like to extend our heartfelt gratitude to those of you who could not make it for the dinner but responded positively to our call for donations.

Your kind support and generosity has made it possible for voluntary civil society organisations such as Aliran to continue their fight and struggle for a better Malaysia based on the principles of justice, freedom and solidarity.

Those present at the dinner would probably agree that it was a fun-filled evening with much singing and merriment. Yet there were important messages that had to be conveyed starting with the President’s opening address.

In his speech, Aliran president Dr Francis Loh commented on some of the key political developments affecting Malaysians. He pointed out that there are individuals and groups, including Umno-BN, working “ to prevent us from becoming a united people and nation, a community of fellow Malaysians caring for one another”.

He painted the ‘Small Picture’, referring to the use/abuse of the Sedition Act, and then moved on to the ‘Big Picture’, focusing on the contestation between the Old Politics and New Politics. He then presented an ‘Alternative Picture’ that places hope for change on civil society groups and People Power.

Among the highlights of the evening was a special collaborative dance piece by the Ombak-Ombak Arts Studio team led by renowned dancer Aida Redza.

The energetic and expressive dance performance titled ‘When Questioning Becomes a Crime‘ sent a clear social message to the audience that we need to break the chains of repression and be ready to question and speak up.

Long-time friend of Aliran, Johan Saravanamuttu, and his son Adil Johan took to the stage to entertain the crowd with their harmonious singing and soulful accompaniment on the guitar and saxophone. Johan’s song Kebebasan, written to commemorate the Operation Lalang mass ISA arrests, struck a chord among the audience, what with the ongoing sedition dragnet.

Not to be outdone was the brother-and-sister team of Riz and Syerleena Abdul Rashid (an Aliran member). The siblings livened up the proceedings with their accomplished performance, as they strummed their guitars and sang to a most appreciative audience.

The final group of performers was none other than the Aliran Singers, who, as the emcee described, are only seen and heard when Aliran’s financial position is in dire straits. Clearly non-professional ‘wannabe’ singers, the team, looking swish in their new sapphire blue and orange T-shirts, nevertheless rose to the occasion (even if we say so ourselves!) and received a surge of support from the diners that evening.

Perhaps the diners were captivated by the parody of familiar tunes which conveyed important social and political messages.

For example, one number was sung to the tune of Dione Warwick’s, “ I’ll Never Fall In Love Again” and queried why the people continued to vote BN:

What do you get with the Cabinet?

A large body count but that’s about it

1Malaysia? oh we doubt it,

Ah! Gaji buta for those clowns

Ah! Think of what’s to come in time.

The Aliran Singers did not spare Pakatan Rakyat either and duly sent them a ‘wake-up call‘ by singing to the tune of Dione’s “ I Say A Little Prayer”. The chorus went like this:

We’re holding our heads (Oh, how to Ubah?)

Can this country change? (We need to Ubah!)

That’s how you must work (The way you‘re going)

Perhaps one of the favourites with the crowd was the Aliran Singers’ Mansuhkan Akta Hasutun song. Check out this brief clip:

One of the highlights of the evening was undoubtedly the keynote address by Dato’ Ambiga Sreenavasen, who provided a no-holds-barred commentary of what was happening in our country.

She chose to highlight some of the key points raised by our Prime Minister in his address to the United Nations and juxtaposed that to what was actually going on in Malaysia.

During his UN address in New York, the PM emphasised the need for moderation in religion and politics, saying we should fight against extremism”.To quote him:


By demonstrating moderation in the political process, we can ensure no-one is left outside society. By practising moderation in religion, we can marginalise the extremists. And by committing to moderation here at the United Nations, we can show that the world is willing to fight extremism not just with short-term military operations, but with long-term plans (para 31).

Ambiga urged everyone to read the PM’s speech in totality and evaluate if all the ‘politically correct’ messages that the PM conveyed were actually practised in our country.

In fact, she challenged him to make the entire speech within Malaysia this time and “walk the talk”.

The sad truth is that the Sedition Act is being used selectively to silence critics and opponents. Meanwhile, certain groups and individuals seem to have free rein to propagate racist and bigoted views with impunity.

With this in mind, Ambiga took de facto law minister Nancy Shukri to task over remarks she made in supporting the attorney general’s decision not to prosecute Perkasa’s Ibrahim Ali’s call to “burn the Bible”.

Just a day after the Aliran dinner, a group of activists in Gerakan Mansuhkan Akta Hasutan gathered at the Speakers Square in Penang to hold a peaceful demonstration. But as soon as Penang Suaram coordinator Ong Jing Cheng started to read his speech to protest against the antiquated Sedition Act and to call for its repeal, a group of burly ‘goons’ shoved him and forced him to stop.

Click on the link and see for yourself the behaviour of the goons who support the Sedition Act vs that of the group that seeks to repeal it. Clearly, the goons do not understand what ‘free speech’ is all about. To them, freedom of speech is the freedom to use brute force to stop others from speaking.

This leaves me to ponder and share with you just how apt the lyrics of another song presented by the Aliran Singers were. (Sung to the tune of Dione Warwick’s “What The World Needs Now”):

“What some goons will do, is in-stigate

Spreading hate and lies, try-ing to – pick a fight

What some goons will do is in-sti-gate

We must just stay calm, while they turn, shake their butts”

How sad indeed if we Malaysians allow these extremists to dominate and usurp our democratic space.

Moderation, harmony, acceptance, unity, concern for one another, peace, justice, and liberty should not be mere slogans for our leaders to use when they seek to impress others. As concerned Malaysians, let us stand up and reclaim what is rightfully ours.

READ MORE:  It’s so hard to say goodbye to a dear friend

Certainly, we should not let the negativity and aggressive, reactionary behaviour of the mob at Speakers’ Square distract us from the optimism and buzz generated at the Aliran dinner the day before.

Indeed, drooping spirits were revived at the dinner and many felt re-energised by the camaraderie among the crowd and the perseverance of the Aliran Monthly print magazine over its 33-years journey, now ended.

The clarion call to move forward towards greater Justice, Freedom and Solidarity generated a wave of energy in the hall that was infectious.

One of the diners, D Goh, expressed a widely held sentiment: “Congratulation on the tremendous success of the whole function! I thoroughly enjoyed and was well soaked in the very strong magnetic field of positive energy that totally filled the hall. Those at the same table as me were simply so energised with the feel of justice – you and your team deserve all our salutations!”

Another guest, S Y Chin, a journal editor, marvelled, “Friends and strangers at the Aliran Dinner brought out the best in Malaysia. Their perspectives and analyses offered us both breadth and depth for reflection. Their humour was incisive but in good fun. Views proffered were honest, fair and constructive. The diversity of people present visualised for us the inner-strength of a multi-cultural community in harmony and thriving on unity.”

Ambiga herself seemed amazed at the Aliran Singers’ performance and the turnout at the dinner. “You guys were just great … How did you get such a crowd?” she enthused. “I totally enjoyed myself. I should thank all of you. Aliran dinners are really one of a kind.”

But we couldn’t have done it on our own. We tip our hat to all of you who have supported us in one way or another all these years.

Now, we hope to draw strength and inspiration from the positive energy and goodwill that you helped to generate and put it into our work in digital format on aliran.com. Do continue to chip in, in any way you can, whether by becoming a member, writing for us, following us on social media, or simply promoting Aliran among your family, friends and colleagues.