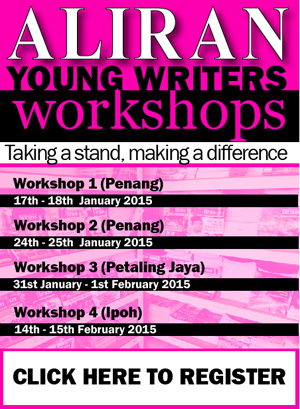 Beams of hope continue to shine through what seems like an onslaught from the dark side, and new rays of hope have emerged, writes Prema Devaraj.

As we move forward into 2015, we remember the loss of lives and the sufferings of thousands of families affected in various airline disasters, landslides and floods.

We also remember orchestrated ethnic religious tension in the country, corrupt practices, a lack of accountability and the violation of the rights of the marginalised, the disempowered and the voiceless in a multitude of ways.

And yet, beams of hope continue to shine through what seems like an onslaught from the dark side, and new rays of hope have emerged.

Malaysians around the country rallied together to help those affected by the floods in various places in the country despite the ongoing politicking and finger pointing about the floods.

While aid is being distributed to those affected, there is also concern over getting aid to the Orang Asli settlements in these states which are much harder to reach.

The call for a moderate Malaysia by a group of prominent Malays (G25) has struck a chord across the country. Not only has G25 now become G35, the group also recently received more support from over 100 Penang Chinese Associations.

Zunar carries on with his cartoons despite the ongoing harassment of his staff and the Home Ministry position that his cartoon satires are somehow a threat to public order.

Elsewhere in the country, groups continue to speak out against the Sedition Act, including in East Malaysia, where a group of 100 Sarawakians met recently to discuss the legal issues and implications of the Sedition Act.

On a different front, the Coalition for Clean and Fair Elections (Bersih 2.0) lodged a police report urging the police to investigate a Facebook comment allegedly posted by the presiding officer in the panel hearing the case of Major Zaidi Ahmad of the Royal Malaysian Air Force.

Major Zaidi was court martialled under the Armed Forces Act 1972 in respect of statements he purportedly made regarding the use of indelible ink during the advance voting by the armed forces in the 2013 general election. Bersih 2.0 is concerned that the Facebook comment raises serious questions on the integrity of the court trying Major Zaidi.

In an endeavour to reach out to the youth, Aliran will be conducting a series of young writers workshops Taking a stand, Making a Difference to help youth create and exchange ideas for change, for a better Malaysia. (If you know any youths (18-35) who might be interested, do encourage them to sign up using the online registration form.)

And so the struggle continues. As we move forward into 2015 let’s take some inspiration from Rabindranath Tagore (1861-1941):

Let me not pray to be sheltered from dangers

but to be fearless in facing them.

Let me not beg for the stilling of my pain

but for the heart to conquer it.

Let me not look for allies in life’s battlefield

but to my own strength.

Let me not crave in anxious fear to be saved

but hope for the patience to win my freedom.

Grant that I may not be a coward,

feeling Your mercy in my success alone;

But let me find the the grasp of Your hand in my failure.

Aliran wishes all its readers the strength, perseverance and compassion needed to make 2015 a better year for all.