Home Newsletters Decentralisation and the restoration of local government elections 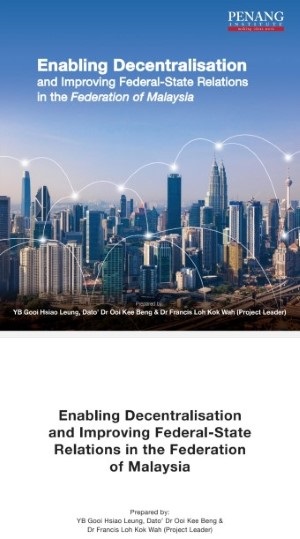 Soon after opposition parties swept to power in Penang in 2008, the new state government expressed its desire to reinstate local government elections.

To this end, then-Chief Minister Lim Guan Eng set up a working committee to look into the matter.

He was duly advised that the federal law regarding local government elections needed to be changed for a reinstatement of local elections.

Then-Penang state executive council member Chow Kon Yeow, who held the local government portfolio, next wrote to the National Council on Local Government on 14 July 2009, requesting that the restoration of local government elections be put on the agenda of the national council’s next meeting.

However, the national council cited Section 15(1) of the Local Government Act 1976 (LGA), which states that local government elections had been abolished with the passing of the act. So, Chow’s request was not entertained.

Chow next moved a motion in the Penang State Legislative Assembly to bring back local government elections, which was duly passed by the House.

Over the following months, the chief minister wrote to the Election Commission asking them to conduct local government elections in Penang to which the federal agency demurred, stating that the LGA disallowed them from doing so.

Finally, on 9 May 2012 the Penang assembly passed the Local Government Elections (Penang Island and Province Wellesley) Enactment 2012, which was gazetted on 5 July 2012.

The Election Commission was once again requested to conduct elections within 180 days, now that the new local government elections law had come into operation.

It was not until a year later, on 14 August 2014, that the Federal Court ruled that the Penang state government did not have jurisdiction to conduct local government elections.

Following the victory of the Pakatan Harapan opposition coalition in the 2018 general election, many hoped that the new federal government would accede to the demand of the Penang government to restore local government elections.

READ MORE:  How will GPS feature in the new government?

However, following the Sheraton backdoor takeover, the new Perikatan Nasional-Bersatu administration shelved the idea of reinstating local government elections even though the new minister in charge of local government is the same person who, as PH minister, had pledged to restore local elections within three years.

That said, the initiative to decentralise government must continue to be accompanied by a concerted effort to bring back local government elections.

In most federal systems, jurisdiction over health, primary and secondary school education, labour, disaster management, social welfare, public utilities and public transport are almost automatically assigned to the states, even local governments, for the reasons clarified above.

In Malaysia, most of these areas, including disaster management (eg dealing with floods, fire, the haze and other natural disasters), are assigned to the central government.

Perhaps we could decentralise by re-assigning disaster management to the state and local governments. These governments have special knowledge of local areas – which areas are prone to flash floods, which areas pose fire hazards.

Knowing the people in the various local areas, state and local government can also initiate programmes to involve the community, local businesses and associations to engage in disaster management in their own backyards, like setting up volunteer fire brigades.

We could next decentralise rubbish collection, sewerage treatment and the catchment, treatment and delivery of water. The responsibility for the upkeep and cleanliness of roads, drains, monsoon canals, rivers and seas clean could also be decentralised.

Public land transport, including the licensing and approval of routes of staged buses and taxis, is another area that could be re-assigned to state and local governments. So too the regulation of school, tourist and factory buses as well as ferry and river transport.

Social welfare services for the vulnerable – such as the elderly, the disabled, widows, single parents and orphans – could also be decentralised. Similarly, the running of maternity clinics and the provision of primary healthcare services could be among the areas to kickstart the decentralisation process.

There is no reason the federal government should be making decisions about these matters. There is even less reason to privatise these services to crony companies, which often have zero expertise in handling these issues.

Amend the law and assign the jurisdictions to the state or local governments. Also, hand over the funds needed for financing these services and paying the salaries and wages of the personnel assigned to operate them.

Ultimately, decentralisation must also reach into reforming the educational system.

No doubt, academic standards have been declining, discipline has been worsening, and the curriculum politicised in our primary and secondary schools.

We have seen been policy flip-flops, for example, with the inception of the PPSMI policy (the teaching of science and maths in English) in 2002. However, after Dr Mahathir Mohamad’s first stint as PM ended in late 2003, Malay was once again reinstated as the medium of instruction for both subjects.

Oh, then they introduced the dual language programme (DLP), which was essentially going back to PPSMI except that teaching in English became an option for every school, instead of being compulsory for all.

Most recently, complaints surfaced that students who opted for the DLP in primary school may not be able to continue the programme in secondary school, due to a shortage of schools offering DLP classes. Perhaps, if the district education office had been in charge, the district officer might have anticipated such a problem earlier than an officer in faraway Putrajaya.

This is the crux of the matter: the Ministry of Education has become enormous and difficult to manage. An organisation which employs some 420,000 teachers and another 32,000 officers at the federal, state and district levels cannot be expected to function efficiently!

Worse, because of its size, power-crazed politicians and officials covet control of the ‘machine’ for political ends. So, besides its unwieldy size, it has also been politicised as seen in the flip-flops over whether to teach science and maths in English or in Malay. This is yet another reason to decentralise!

(Admittedly, one of the goals in the national education blueprint is “to decentralise”. In fact, the Ministry of Education does not allow state education departments, let alone district education offices, to make decisions on important matters.)

The attractiveness of decentralisation is that it opens doors for parents, alumni, the local community, and local industry and businesses to play a role in the upkeep and running of schools. More responsibilities can be assigned to parent -teacher associations.

Decentralisation should cover decision-making on the deployment of heads, teachers, extra-curricular activities, if not parts of the main curriculum itself. Educational officers from the federal, state and local governments can work closely with the teachers and the members of these parent-teacher associations and school boards. In this way, the quality of teaching, the improvements of the schools and the teaching environment will be upgraded in a more cost-effective manner.

By granting more autonomy to schools in urban areas and those schools that cater for more middle-class children, the Ministry of Education would be able to redirect its focus, give more attention, and allocate more funds to other schools, especially in the rural areas, that do not yet have strong parental and community support.

So, decentralisation can help us not only to solve some of our most mundane problems, like clogged drains and road potholes, but also to deal with the serious business of improving our educational system. This way, the youth can enjoy a better system of education and the country can compete at the global stage again.

How do we get to decentralise? Well, the Penang chief minister of Penang, backed by the findings in an interim report on federal-state relations, has offered three recommendations.

Second, he calls on the various state governments to come together to exchange and share information on how best to deal with the federal government. What might be the best practices that other states can learn from one another? It does not need to come from the top!

And third, he will be calling on the Penang government to set up a bipartisan standing or select committee in the state legislature so that the state assembly members will also investigate, study and make recommendations on improving federal-state relations, specific to Penang.

It is obvious that recommendations one and three will only occur if a new PH government is returned to power in the coming general election.

So, if we want to ensure improvements to our water supply as well a leap forward in our education system, we must vote for the party that calls for a reform of federal-state relations too.

Francis Loh
Co-editor, Aliran newsletter
12 June 2022
AGENDA RAKYAT - Lima perkara utama
Support our work by making a donation. Tap to download the QR code below and scan this QR code from Gallery by using TnG e-wallet or most banking apps: