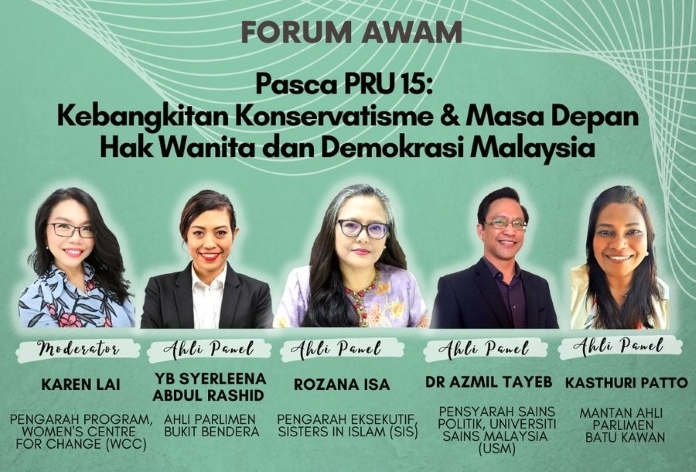 Aliran and Sisters in Islam (SIS) recently organised a forum in George Town, Penang on “Kebangkitan konservatisme dan masa depan hak wanita dan demokrasi Malaysia” (The rise of conservatism and the future of women’s rights and democracy in Malaysia).

The impetus for the forum started with the need for NGOs such as SIS to expand its outreach beyond Klang Valley. SIS has done a lot of commendable work in defending and advancing women’s rights in Malaysia, particularly through its Telenisa programme.

The programme provides free legal advice to Muslim women – 75% of whom are from the poorest 40% of households – who face tremendous difficulty navigating the Sharia court system in cases involving divorce, polygamy, alimony and matrimonial property.

Most ethnic Malays only know SIS as a “deviant” organisation based on a fatwa (religious recommendation) issued by the Selangor State Islamic Council.

But SIS’ admirable efforts to help poor and vulnerable Malay women fighting for their rights in the patriarchal Sharia court system have largely gone unnoticed by the Malay community. Hence the need to organise more activities outside the Klang Valley to dispel the unfair mischaracterisation of SIS and showcase its important and meaningful work.

The passing of bizarre yet downright oppressive new Islamic enactments in Terengganu injected a sense of urgency into organising a public forum to discuss the threats posed by religious conservatism to the individual rights of Muslims and non-Muslims alike.

The new Terengganu enactments aim to ‘improve’ the state’s Sharia criminal code by criminalising witch doctors and sorcery, women who are pregnant or give birth outside marriage, women who ‘act’ like men, and those preparing to commit sodomy. The punishments for these offences are a three-year prison term, a RM5,000 fine and six strokes of the cane.

That the brilliant religious minds in Terengganu could come up with these enactments at a time when the country – and the rest of the world, for that matter – is experiencing rising living costs and bracing for a looming global recession beggars belief. It shows their complete lack of compassion and empathy for those whom the religious conservatives deem to have strayed from the righteous path.

These unnecessarily punitive enactments fail to consider the systemic problems that lead to cases of out-of-wedlock pregnancies among Malay women.

Instead of punishing these women, who are more likely to be poor and less educated, perhaps the Terengganu state Islamic authorities should better protect the rights of these women, address the socioeconomic injustices they face, and help to formulate a comprehensive sex education programme that goes beyond abstinence-only.

The utter lack of compassion and empathy among these religious zealots was also apparent in the recent brouhaha over the Ministry of Health’s project to introduce the pre-exposure prophylaxis (PrEP) medicine in several selected government hospitals as part of its harm-reduction effort to combat the spread of the HIV/Aids virus.

Extreme right-wing Islamist groups such as Isma are up in arms against this pilot project as they claim it normalises the LGBT lifestyle that they much revile. The religious authority in Selangor followed suit by issuing a fatwa prohibiting Muslim medical practitioners from prescribing PrEP to gay couples.

The overarching aim of PrEP medicine to reduce harm among those who are at the highest risk of contracting HIV/Aids, regardless of their sexual orientation, is lost amid the religious uproar over the pilot project.

“First do no harm” – the driving principle of the Hippocratic oath that is the moral bedrock of the medical profession – is irrelevant to these religious zealots as they have no qualms in letting some people die while others live, for the sake of blind dogmatism.

As we know all too well, the rights of non-Muslims are also eroded by the actions of these religious zealots. In Malaysia’s multi-ethnic and multi-religious society, the lives of Muslims and non-Muslims often closely intersect and intertwine.

In the weeks leading up to the Lunar New Year celebration, the new Permatang Pauh MP, Muhammad Fawwaz Mohamad Jan, hit the headlines when he confronted the management of Sunway Carnival mall in Seberang Jaya, Penang for its open display of alcoholic drinks.

Fawwaz claimed the display was insensitive to the Muslims who live in the area. He totally disregarded the fact that the alcoholic display was meant for non-Muslims, particularly the Chinese, who would be celebrating the Lunar New Year.

The MP, who clearly acted outside his official capacity, also ignored the fact that over 30% of the Seberang Jaya constituency are non-Muslims while the figure is 70% in the neighbouring Bukit Mertajam parliamentary district.

I am sure there are also many Muslims who do not agree with his divisive and inflammatory publicity stunt. But then, what exactly can we expect from an MP whose only achievement of note before getting elected was being a polygamous religious preacher with 11 children.

His surprise win over the more well-known incumbent Nurul Izzah Anwar is a sign of the pervasive conservativism among the Malay-Muslim electorate, particularly young and new voters.

A 2022 nationwide survey of Muslim youth, carried out by SIS and the Merdeka Center, showed that many of them hold deeply conservative and even contradictory views, especially on religion.

It comes as no surprise that many of these conservative young ethnic Malays voted for Perikatan Nasional in the last general election, taking the coalition a whisker away from claiming the federal government.

My research in Kedah state paints a clear picture of this phenomenon. In the parliamentary seat of Baling, where Malays make up 89% of the population, the incumbent Umno MP, Abdul Azeez Abdul Rahim, lost by an overwhelming margin of 29,137 votes even though newly eligible voters rose by 24,886. In fact, Abdul Azeez received fewer votes in the 2022 general election (35,356) than in the 2018 general election (38,557).

This means most Malay votes that used to go to Umno swung to the Pas-PN candidate in the 2022 election as he was seen to be more dependable in representing Malay and Islamic interests.

We will probably see the persistence of a conservative wave in the upcoming state elections in six states. It is a trend those of us who are civic-minded and who care about protecting our freedom and rights should be worried about.

The ethno-religious polarisation in our society is real and alarming as last year’s general election results revealed: nearly 90% of Malays voted for the Malay-Islamic coalitions PN and the Umno-dominated Barisan Nasional while 90% of ethnic Chinese and 75% of ethnic Indians voted for Pakatan Harapan.

It is time we come up with and spread our own grand counter-narrative that is inclusive, just, empathetic and egalitarian as a bulwark against the rising tide of religious conservatism in the country.

Azmil Tayeb
Co-editor, Aliran newsletter
24 January 2023
The views expressed in Aliran's media statements and the NGO statements we have endorsed reflect Aliran's official stand. Views and opinions expressed in other pieces published here do not necessarily reflect Aliran's official position.
AGENDA RAKYAT - Lima perkara utama
Support our work by making a donation. Tap to download the QR code below and scan this QR code from Gallery by using TnG e-wallet or most banking apps:

Under the avalanche of verbiage some undeniable truths stand out: A) polarization is inevitable as long as the twin dilemmas of Malay fear of loss of land ( Singapore) and the years of spoon-fed prosperity continue to rule the roost. B)Under such a scenario a small minority of wealthy Indians will leave, with the bulk of the descendants of the estate Indians caught in no mans land. [Many] will carry on being gangsters. C) Wealthy Chinese will carry on with the pursuit of Mammon knowing that the might of the CCP will protect them from another carnage akin to 1969. An uneasy truce will prevail as the Malay leadership contemplates on how to deal with an ever ascendent CCP. It is clear here who the real losers are.