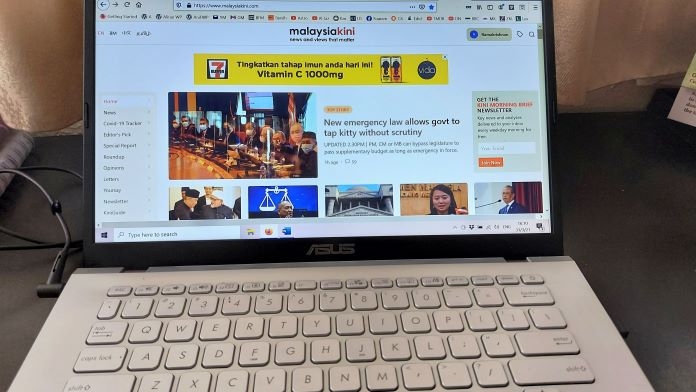 The old and new media – in Malaysia as elsewhere – do not exist in a vacuum.

Media institutions, professionals, practices and audiences are part of – and often are influenced by – wider factors, the key factors being power structures and relations.

Quantity does not mean quality

Various media have mushroomed over the past decade, largely due to the digitalisation of the media and the widespread use of the internet.

But this proliferation isn’t necessarily a good thing. The proliferation of some media types – principally, digital media – has hurt other older media, such as the print media.

Many years ago, two wise media scholars from the UK, Peter Golding and Graham Murdock, wrote critically about the proliferation of television programmes around the world. They warned us all that this actually amounted to the proliferation of much of a muchness, more of the same.

In contemporary Malaysia, the danger is that this might be the case. For many years, the increase in media channels and products meant an increase in the production and dissemination of the same perspectives and points of view.

Until Malaysiakini emerged in 1999 as our first independent online news portal, freely available to everyone who had internet access, Malaysians depended heavily on the mainstream Malaysian media.

Whatever the doubts over the setting up of the Multimedia Super Corridor in 1996, its bill of guarantees assured us of freedom of the internet and allowed Steven Gan and company to set up Malaysiakini with little harassment by the regime. Of course, they have been harassed many times since then and have even brought to court, culminating most recently in the sentencing and penalty imposed by the Federal Court.

Digitalisation has also allowed Malaysians who have internet connectivity to have access to international news media, such as the BBC and CNN.

So, it may be argued that digitalisation has brought about genuine variety. But I would advise caution, given the legal and economic controls this regime has over media institutions and activities.

Both the act and the commission are the ‘Big Brother’ of the digital age, one could say, half in jest.

Then, of course, there is the market. Like it or not, the Malaysian economy is very much tied to the dominant neoliberal international system, with companies obliged to have business models that privilege profits over everything else.

As far as the media are concerned, such a system tends to emphasise the frivolous over facts, sensationalism over analysis, form over substance and, of course, quantity over quality.

We are clearly heading that way with our media – old and new – as they struggle to survive economic pressures and navigate political control.

So, yes, the media have proliferated over the last decade, largely because of the digitalisation of the media and the widespread use of the internet. But we must critically evaluate the nature and quality of this proliferation.

Such evaluation must consider the impact of political and economic changes. In Malaysia, we need to look at the dark, pre-2018 general election era and then to the hope generated for two-plus years, and the despair that followed the 2020 Sheraton Move and coup, which resulted in the backdoor government we now have, and the global pandemic.

We must appreciate this cycle of changes in order to come up with alternative game plans. Any analysis of media futures needs to appreciate societal realities and the exercise of power in Malaysian society.

We have to locate ownership and control patterns of the media within this wider exercise of power.

With the old media, while getting such information was not exactly straightforward, information could be pieced together from many sources to come up with a composite picture.

But the new media – and even social media – present new challenges. Who really controls and bankrolls many of these organisations remains a secret, especially in security-obsessed country like ours.

New transparency laws need to be enacted. But, of course, wishing for it will not make it happen. Therein lies one major impediment of an authoritarian society.

What studies have shown is that if the dominant system of governance is undemocratic, it is unlikely that the media industries will be democratic and representative.

You can’t have a free media when there is little or no freedom of expression. Some online media in Malaysia appear to be testing the boundaries. But recent developments point to attempts at curbing such testing.

There is a suggestion that state and economic ownership and control shouldn’t be our focus. Some assert that it is the digital media and the companies concerned that are now in control with their algorithms.

But surely these companies are operating based on the logic of capitalism. The imperatives of the economic system – what Dan Schiller has called ‘digital capitalism’ – impinge on the way the old and new media operate.

So, of course, we need to stress the importance of ownership and control, certainly in contemporary Malaysia.

We also need to interrogate the change in the political environment since March 2020. Changes are being pursued by those in power, under the cloak of the emergency, to control expression and subsequently the media environment.

On 11 March, the government published in its gazette the Emergency (Essential Powers) (No. 2) Ordinance. The focus of this ordinance is on “fake news” in relation to Covid-19 and the proclamation of emergency. It came into force the following day.

READ MORE:  Stop going after activists and focus on the health crisis

Section 24 of the fake news ordinance compels an accused person to set out a defence statement stating in general terms the nature of his/her defence, and the areas of dispute with the prosecution’s case. The accused person must also produce copies of any document which would be tendered as part of the defence.

To summarise, the fake news ordinance is a much more draconian piece of law than we appreciate. It represents a steamrolling of due process rights and fair trial protections and is a gross violation of human rights and fundamental liberties as provided in the Federal Constitution and law.

Whether it is new media or old media, nothing revolutionary is going to take place if we don’t address, critique and overturn undemocratic actions and policies that are currently being implemented.

Easier said than done perhaps, but genuine social change that is liberating seldom is easy and without costs.

The alternative, of course, is burying our heads in the sand and hoping somehow that all this will go away. But it won’t with our inaction.

It is about our agency, not the novelty of new media or the purported `objectivity’ of the old.