Home TA Online 1MDB media exposes: How do we salvage the nation’s maruah? 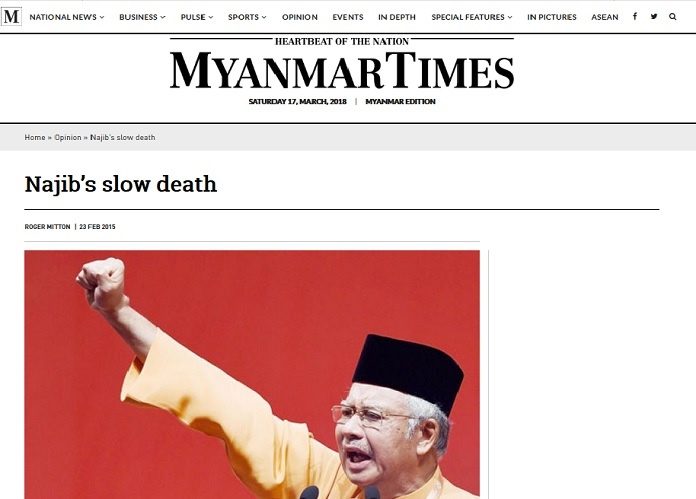 Are we going to take on much of the global media to regain our maruah or do we sit back and cry that the entire world is attacking our leadership, wonders JD Lovrenciear.

The Myanmar Times may have published it in 2015, but its damning commentary on the infamous 1MDB saga keeps popping up on social media every now and then and spreading like wildfire.

Now that such 1MDB reports and commentaries have been splashed, rehashed and recycled widely, what should be every Malaysian’s main concern is the national maruah (dignity). Either we come together to save our nation from this 1MDB nightmare – or, once and for all, the government convinces nations and media across the world to agree with our prime minister and his team’s claims and denials.

Titled “Najib’s slow death”, the Myanmar Times commentary said that Malaysians are “drowning in a gluey black sea of venality the likes of which has not been seen in this region since the days of President Ferdinand Marcos in the Philippines”.

When several Western media slammed the 1MDB exploits, Barisan Nasional supporters agreed with the Malaysian government’s claim that there was a plot to attack the nation’s sovereignty.

But when a commentary in the media from an Asean partner nation states: “Just consider a few of the more damning indictments against the PM and his band of gangsters, cheats and philanderers,” what do these BN supporters shout? That even our immediate neighbours are publishing fake news? And is it enough just to claim it is fake? Will our ‘maruah’ return?

According to the commentary, “it is hard to truly comprehend the full magnitude of this gigantic, nepotistic malfeasance, and even the illustrious New York Times took three pages to try to do it.”

It said there is “no clear answer, except to recall that Najib is under the sway of Rosmah, a shopaholic wrecking ball, who shrugs off ridicule and ignores how her actions thwart her husband’s premiership”.

As patriotic Malaysians, what do we ordinary citizens do when such statements are published? Even the well regarded weekly, Tempo, in Indonesia published a horrifying scoop on our country’s leadership over the 1MDB saga recently.

The Malaysian ambassador in the US has just registered a protest against the Western media. Now what do we do with our Asean neighbours’ media splash?

Mind you, how will our nation’s leader and his beloved wife, who are heading to Australia for an Asean summit, face up to all these news reports, which refuse to go away?

Are we going to take on much of the global media to regain our maruah? Or do we sit back and cry that the entire world is attacking our leadership? Do we make-believe that our own opposition political parties have diabolically influenced an entire world of media practitioners and owners?

The Myanmar portal added there are “already worries that if and when 1MDB collapses, the nation’s financial system may take a hit that will dwarf the effect of the Asian Financial Crisis in 1997″.

Meanwhile, Malaysians have not seen any publicly declared 1MDB annual reports or financial statements over the last couple of years. We are meekly putting up with the OSA seal, which has put away all details from the public eye.

Perhaps we should all gather in front of foreign embassies and protest over these reports? Perhaps too our government should cut off all trade and economic support to those nations whose media have been spilling the beans – and that includes retracting Najib’s billions of investment aid for the Trump-led US economy?

If our nation suffers, our innocent rakyat will be affected. And with the published reports swirling around the world, including Myanmar, Indonesia and who-knows-where else in the region, is the nation’s maruah none of our citizens’ business?