Home TA Online 2014 TA Online Being a child, being female and being woman in modern Malaysia 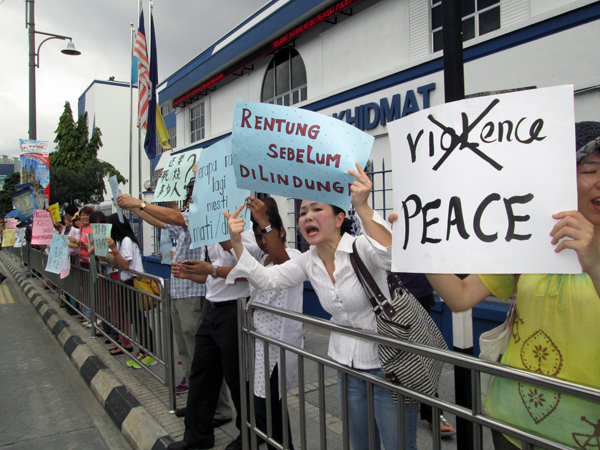 We have to question if aspects of our culture, which discriminates against and denigrates women, are mere excuses for maintaining the unjust status quo, says Sheila Santharamohana.

Have you ever wondered what is it like not being a man in this country?

Till today, a male child is considered a blessing to the proud parents and grandparents of many Malaysian families.

The birth of a female child though, is less celebrated and very soon she finds herself at a disadvantage from early on in her life. Before we had domestic help, young daughters helped out in the home much more than boys. In some cases, like my stepmother’s family, they ate after their brothers, who had the first pickings of all meals, and cleaned up after them.

We hope that times have changed since those days where girls were given ‘Home Science’ courses and boys, Industrial Arts or girls were told they should be teachers or that their goal in life was to marry well and have families.

Recent cases have shown that instead of nurturing our female children, the law has seen fit to unjustly allow these girls heavy responsibilities very early on or to deny them their right to seek justice under both civil and sharia law. These cases do not bode well for the female child.

The cases of rape where the victim has been further punished by being forced to marry their assailants or of statutory rape ‘solved’ by the marriage of child brides to their adult boyfriends or of the inaction against logger-rapists of Penan’s sexually violated children do not speak well for the human rights of female children – never mind the atrocities committed in the course of trafficking of child refugees in Malaysia.

READ MORE:  The 'joke' that falls flat on women’s dignity

When a family of siblings was brought home after their parents were incarcerated for child abuse, they were used as photo op by politicians and had their faces and lives on display in all the dailies in Malaysia. The government has not even broached the subject of the number of homeless parents and children that populate our city sidewalks at night in the heart of the capital.

That this willful indifference to the care and welfare of children is perpetuated by the law, the government and by some quarters in society is also disturbing. Tragically, the collective indignation and outrage over tainted chocolates was much louder than the call for soul searching we should have had as a nation over the continued deaths and violations of our children.

In the shocking death of Siti Soffea, the two-year old whose life ended so quickly and gruesomely, fingers were quick to point at her homeless and unemployed mother for criminal neglect. The reality is whilst Siti Salmy’s husband is serving time in prison, both mother and child were left to fend for themselves in dire circumstances.

We need to ask where the support networks are for women in her circumstances, because there are so many like her: women who struggle to put food on the table because their husbands have left or single mothers unable to support the family. For women in the know who apply and are lucky enough to get approval, the Malaysian government pays out a token amount of RM100 per child or RM451 to a family of more than four children.

Currently, though women make up 47.9 per cent of the workforce in 2012, there are not a lot of options for subsidised health or child care – especially for women in the private sector. In fact, poor marginalised women often forego seeking medical assistance for themselves or their children because they cannot afford it in this country.

When we compare this appalling situation with the ‘degenerate’ Western countries where the welfare system actively seeks out those who need it, it becomes all too clear that for all our ‘Eastern’ values and impassioned religiosity, charity and generosity of spirit is still severely wanting.

These same ‘Eastern’ values see it fit that a rape victim is allowed to marry her assailant after an exchange of RM8,000.

Some in our society find it acceptable, even commendable, to assail the dignity of women as evident in the many cases where women and transgender have been shamed for their bodies, the clothes they wear and the people they sleep with. Books on female sexuality and reproduction are banned while women who aspire to be more than the stereotype and achieve it are insulted regularly.

They wanted to put Dyana Sofya in her place with their febrile attacks on her morals, upbringing, ‘Malayness’ and even her education. Failing to make a dent on the young woman, they tried to take the mother to task for bringing up an independent-minded, vocal and ambitious daughter. When YB Teresa Kok wore a skirt to work, a fellow Parliamentarian complained that it was too short for his taste.

When men seek to deny the dignity of women and are supported for it, it says a lot about the society we have become. For shame.

Sadly, the poor treatment of women is not unexpected. For too long, we have stigmatised women. We trivialise domestic violence and spousal abuse – by looking the other way, or by justifying it by saying it is allowed in our culture or religion, or worse, by agreeing that the women ‘deserved’ to be disciplined by their partners.

Crime against women is similarly dissected for its or rather HER morality. If a woman drinks beer in public, her morals are questionable and so she should be sentenced to the cane. If a woman is raped, she asked for it with her provocative clothing. If a woman is bound, gagged and murdered, she must have been promiscuous and her punishment, just.

In the stifling familial and societal expectations, mired in outdated patriarchal tradition, the role and position of women have remained subservient to men even now. Women who work are expected to sacrifice for their children, manage the household and deliver financially.

Divorcees become outcasts, immoral and stigmatised regardless of the reasons the marriage failed. Personally, unfortunately, I know only too well how families can become spiteful, antagonistic and judgmental on the life choices a woman makes.

In a country where three out of every four undergraduates are female, the lack of respect is astounding. We have to question if aspects of our culture, which discriminates against and denigrates women, are mere excuses for maintaining the unjust status quo.

As a nation, are we promoting gender equality and respect in our message to our young so that girls and women know they have every opportunity to fulfil their potential in this country? I doubt.

Children and women make up the very core of families and societies. When the laws, culture and religion collectively seek to undermine the position, dignity and access of half the population, we should not countenance it so easily or allow those who do to get away with it.