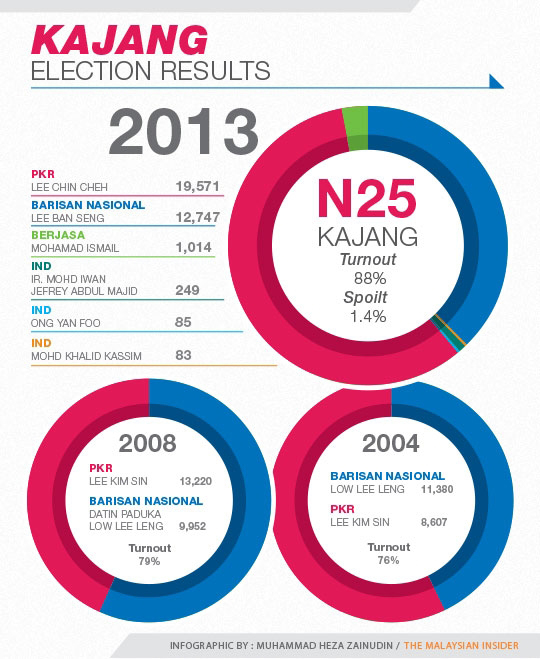 P Ramakrishnan urges voters in the Kajang by-election to send a clear message that they are dissatisfied with the way things are and that they want real change.

As you go to the polling booth on Sunday, 23 March 2014, remember that in your hands lies the destiny of this nation.

When you hold the ballot paper in your hand, remember that you are going to determine the future of our country. It is a heavy responsibility that you have been entrusted with but no generation of voters has ever been tasked with such a duty or been given such an opportunity.

What you do on 23 March must surely be the beginning of a new change that will provide the impetus for a new government.

You are casting your vote to determine how this nation should be governed. You are going to express yourself very diligently and bravely, and let it be known in no uncertain terms what is best for this country.

The present government has failed to curb corruption which is the scourge of this nation. Corruption has become so rooted in our everyday life that it flourishes rampantly without any serious attempt to curb it.

Just look at the politicians and their lifestyle. Do you ever wonder how they have become so enormously rich? Why is that they are not investigated by the MACC and held accountable? Why they are not compelled to declare their assets publicly?

Will these super rich politicians sincerely declare, as did Thomas Jefferson, “I have the consolation of having added nothing to my private fortune during my public service, and of retiring with hands as clean as they are empty”?

Look at our unity. It is in a shambles. The unity and tolerance that we have enjoyed in the past has been destroyed by trouble-makers who are strident and shrill in their demands to keep us apart. They have gone out of their way to pit the Malays against the non-Malays without being reprimanded by the national leadership. They are even being funded by the government, thus conveying the message that the trouble-makers are being sponsored by the leadership. Do we want this to continue?

The entire world including Muslim countries are appalled by the monopolistic claim of Allah as the sole right of the Muslims here. The leadership has failed miserably in reining in these zealots and in giving real meaning to the claim that Malaysia is indeed a moderate country as the federal government has proclaimed to the world.

The judiciary has become an appendage of the government as seen in the way Anwar Ibrahim was persecuted and prosecuted, in a determined effort, without giving him an opportunity to defend himself adequately. Anwar was convicted by bringing forward the earlier dates that were agreed upon; why was the court in a hurry to convict him before nomination day for the Kajang by-election? What was the court’s interest in wanting to convict Anwar before nomination day?

The way Karpal Singh was convicted by the court has shocked all who cherish the right of freedom of expression and of opinion. It has bewildered the international community.

Why was the self-confessed killer of Altantuya acquitted and freed? Who ordered her to be blown up without a trace? Why was her immigration record wiped off from the computer and on whose orders? These are issues the courts should have addressed but unfortunately did not.

Our education system is an utter failure. The national schools are becoming like religious schools. Some Orang Asli children were punished for not reciting the Muslim prayers. During fasting month, it becomes so difficult for non-Muslim students to have their break. Some students were confined to the toilet areas to have their break. Some were insulted in derogatory terms when they were having their break in some corner of the school building. This kind of harassment should never happen under any circumstance – but it happens.

Biro Tata Rakyat (BTN), instead of promoting unity and ethics, has become a course to run down the non-Malays as ‘pendatang’. This agency is a danger to the nation and its harmony as it brainwashes attendees with warped thinking and insults citizens who are non-Malays.

There are a vast majority of Malaysians – both Malays and non-Malays – who do not agree with the way this country is being governed. They do not agree with the lopsided policies that deprive the deserving and enrich the cronies unfairly. They dare not speak up openly for fear of repercussions. It is this majority of Malaysians – at least, those of them who reside in Kajang – who now have the opportunity to pass judgement on the present government by voting against the BN without any consequence. Treat this by-election as a referendum on the BN’s misrule and express your displeasure without fear or favour.

Fifty-seven years of unbroken BN governance has ruined this country. Why are the rural Malays still in abject poverty? The Umno-dominated cabinet and government have failed to solve the problems of the poor and the marginalised.

The present government is totally incapable of curbing corruption; it is clueless as to how to promote unity; it is hopelessly incompetent in alleviating the status of women; it is ineffective in controlling crime; it cannot safeguard the rule of law; it is not accountable; it is anti-democracy.

If you want all this to change, then vote against the BN candidate!

Dear Kajang voters, as Eleanor Roosevelt stated, “In the long run, we shape our lives, and we shape ourselves. The process never ends until we die. And the choices we make are ultimately our own responsibility.”