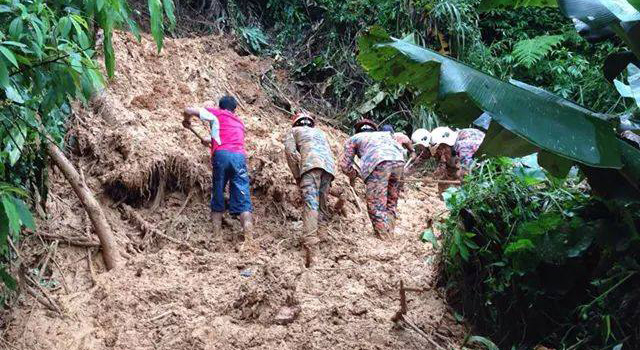 What have the migrants (regardless of legal status) got to do with a disaster resulting from thoughtless, environmentally unfriendly development, asks Angeline Loh.

Some undocumented migrants and refugees may have been eking out a living on the hill slopes of Cameron Highlands. But if you had been to this well-known hill resort before, you would not have failed to notice the increasing number of tower blocks and buildings mushrooming on the hillsides.

It is obvious that such property development requires deforestation, replacing the natural forest cover, serving to support soil and absorb run-off water, with dead concrete which doesn’t possess any of these capabilities.

Tourists must be put off by the sight of bare patches of hillsides among the lush forest and undergrowth, from the road going up to Tanah Rata, Brinchang and beyond. Moreover, the existence of plastic-covered strawberry farms, jostling each other on the slopes, fronted by shops marketing their produce on the roadside, is not an attractive sight.

At least, the tea plantations, flower and vegetable farms did not create such an eye-sore. The apiaries that dotted the hillsides were also in keeping with the natural environment of the highlands. In the past, Orang Asli houses could be seen among the trees, from the road, and buses stopped to pick people going up or coming down to towns and villages on the mountainside.

Some of these houses have sadly been lost, and buses only hurry along the new widened road just to deposit passengers at hill towns. The scenery is now not as enjoyable as it was back then, and the journey up and down has become quite boring.

Well, building the road also results in deforestation and drastic cuts into the hillsides. Such unsustainable ‘development’ has taken place without any proper thought or study to conserve the natural environment of the highlands – just like the building development taking place on the upper slopes in Tanah Rata and surrounding areas.

With this sort of ‘development’ spreading around Cameron Highlands, is the flooding of Ringlet and the Bertam Valley surprising? The disaster is the inevitable natural consequence of thoughtless, shoddy or inadequate planning by state authorities that have allowed uncontrolled and destructive projects to degrade the environment.

The colonial-style hotels and chalets built in the past were mainly old mansions and former houses or cottages used as holiday homes by 19th century colonial administrators. The small towns and villages that sprang up as supply and service centres for these habitations were not envisaged to become sprawling urban areas.

Instead, the highlands were preserved as places of relaxation and recuperation from the hustle and bustle of the rat race, even if it wasn’t as hectic then as it is now. The highlands were where we could get away and enjoy cool refreshing air enveloping the lush green hills.

So what have the migrants (regardless of legal status) got to do with a disaster resulting from thoughtless, environmentally unfriendly development? Are they being blamed because they were brought to work on those construction sites? Or because they are doing small-scale farming? Or because they are being employed on farms set up (legally or illegally) and managed by local employers?

The migrants themselves can do little and have little impact on the environment, as they have no say in the matter, except to work and then to return to where they came from. Or they may live in difficult conditions as they are not allowed to work legally.

It is also rather disturbing that the authorities did not tackle the problem of illegal economic activities carried out in the highlands until the flooding and landslide disasters occurred. Residents in the affected areas are apparently reluctant to move away despite the insistence of local authorities and their elected representative.

Obviously, the presence of migrants and refugees in the highlands is the least of our problems. The current crackdown, in which the authorities are vowing to ‘flush out’ the migrants, is not a flood prevention or conservation measure of any kind. The exercise will not stop mindless, unplanned, building and hill slope development in the highlands.

Are there any conservation and reforestation measures to remedy the current degradation of the highlands in the offing, which the rakyat are ignorant about? So,what exactly should Malaysians be worried about? Latent and hidden corruption?