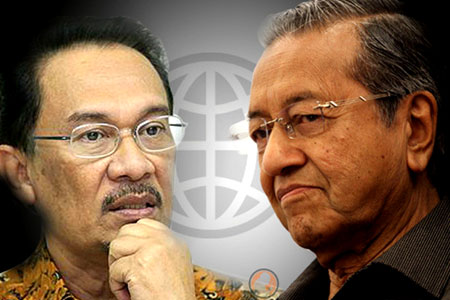 Mahathir’s statement that voting for Anwar is equivalent to voting for the United States lacks political depth and wisdom, says Ronald Benjamin.

Today is nomination day for the Kajang by-election, with Wan Azizah contesting instead of Anwar Ibrahim following the Court of Appeal’s verdict overturning an earlier High Court decision to acquit him on a charge of sodomy.

Earlier, Dr Mahathir Mohamad made a statement suggesting that supporting Anwar would be  equivalent to voting for the United States. This is nothing new because whenever there is an election Anwar is always portrayed as pro- American and a tool of its hegemony.

The question is, can a single individual within a disparate coalition such as Pakatan Rakyat make decisions on his own about issues affecting sovereignty, while the majority of the electorate have been sympathetic to the suffering of Palestinians who are under Israeli occupation? The historical fact is that Malaysia’s opposition to foreign powers comes not only from Umno but also from Pas and socialist oriented political parties and movement. This fact alone debunks Mahathir’s assertion on foreign intervention and Anwar Ibrahim.

The pertinent question to ask is, what are the conditions that would expose Malaysia to the hegemonic designs of big powers? My understanding is that a deeply divided society whether in the socio-economic sphere or in terms of ethno-centric divisiveness provides the ideal context for foreign powers to dictate the course of the country.
The Barisan National’s ethno-centric platform that manipulates ethnic fears when its legitimacy is threatened is a greater threat to national sovereignty than a single individual such as Anwar Ibrahim. The actions of extremists pitting one ethnic group against the other, supported by certain prominent politicians in Umno, weakens the unity of Malaysian society.

In the long run, this would create conditions of vulnerability that would be conducive for big powers to interfere in the affairs of the nation. This can be observed in other countries. For example the Sunni-Shia rivalry has been manipulated to the maximum by United States through its backing of the Sunni opposition against the Shia-led government in Iraq.

The Syrian crisis, which was started as the legitimate political and economic grievance of the population, has regressed to a conflict between Alawites and Sunni extremists, masterminded by influential elites in Saudi Arabia and Turkey with the backing of the United States. Meanwhile, Shia-ruled Iran,  which has historical religious links with the Alawites in Syria backs the regime of Bashar Assad.

The whole purpose of a proxy war led by powerful States is for regional dominance. This in turn creates political and military dependency among vulnerable nations towards big powers. From these examples one can see how vulnerable a nation is to foreign interference when there is an opportunity to manipulate ethno-religious fears.

Leaders like Dr Mahathir must take a deep look at themselves and their party ideology, which continues to divide the multi-ethnic population in Malaysia by planting the seeds of divisiveness, making the nation vulnerable to foreign interference. Umno, with its current strategy of remaining silent in the face of extremist demands of divide-and-rule, is a greater threat to Malaysian sovereignty than any of the other political parties in Malaysia.

For Malaysia to remain steadfast in opposition to foreign hegemony, it is vital for political and grassroots leaders to work on strengthening multi-ethnic inclusiveness by rejecting extremist ideology with words and action.

All Malaysians should make a national collective effort to live up to the principles of citizenship by accepting each other as brothers and sisters of the nation. If there is dissension or differences it should be more to do with approaches and diverse ideas of how to develop the nation rather than any obsessioa n with ethno-religious identity.

A collective multi-ethnic bond that values independence is more credible than the unity within a particular race.  Therefore, the statement by Dr Mahathir that voting for Anwar is equivalent to voting for the United States is simplistic and lacks political depth and wisdom.