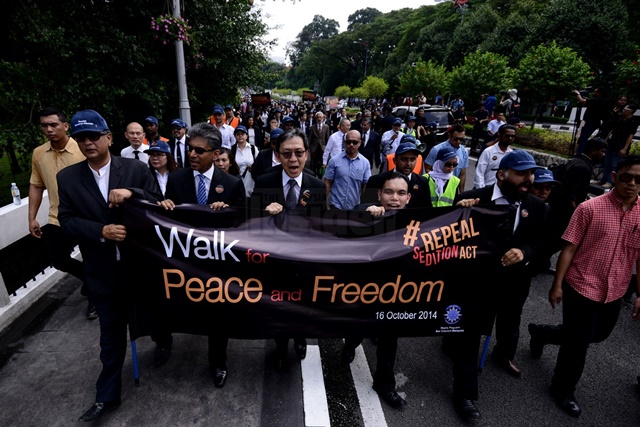 Wishful Accountant believes both the proposer and seconder should be nominated for the Nobel Peace Prize as this may be the best idea ever emanating out of Malaysia.

I must say that the idea of making attorney general head of the Bar Council is such a brilliant idea.

I don’t think I have heard a better idea coming out from our august Parliament. This idea must be super excellent as a cabinet minister said they will consider it.

I am unsure why the International Commission of Jurists is jumping up and down. Such spoil-sports.

I think both the proposer and seconder should be nominated for the Nobel Peace Prize as this may be best idea ever emanating out of Malaysia. Bravo! Clap, clap.

I support this suggestion as a Bar council with the attorney general as the head will see all the problems automatically disappearing. There will not be any more lawyers defending the rights of common people or working to uphold justice as they will just have to follow whatever the attorney general tells them.

There will not be any confrontation in the courts and the public space as the attorney general vs lawyers for the defendants will be an amicable contest. As all lawyers will be reporting to the AG (in the Bar), they can just discuss cases and maybe just settle issues out of court. There won’t be any need for costly court battles wasting taxpayers’ and defendants’ money.

There will not be any more legal eagles being arrested by the police for any violation of the law as it is impossible that the attorney general would prosecute his own people as he would be the head of the Bar Council.

Everyone will be happy, and justice will be served all over.

I would like to take this suggestion further. Maybe the Bar Council chairman can automatically be appointed as attorney general too. What works one way should work both ways, right?

Wait, wait; I have another proposal: why not submit a motion to Parliament to make the attorney general the head of the judiciary as well as appoint him as the speaker of the Dewan Rakyat. This way, the attorney general can ensure the smooth enactment, prosecution, defending and judgment of the laws of Malaysia.

Imagine, if one person can do all this; there will not be any dispute or different interpretation of the laws – all will be applied uniformly as one person is in charge of overseeing the whole administration of justice in Malaysia.

What more can Malaysian ask for? Like I said, our first Nobel Peace Prize may be just around the corner.

By the way isn’t this beginning of the month of April one where fools can be abundantly found?