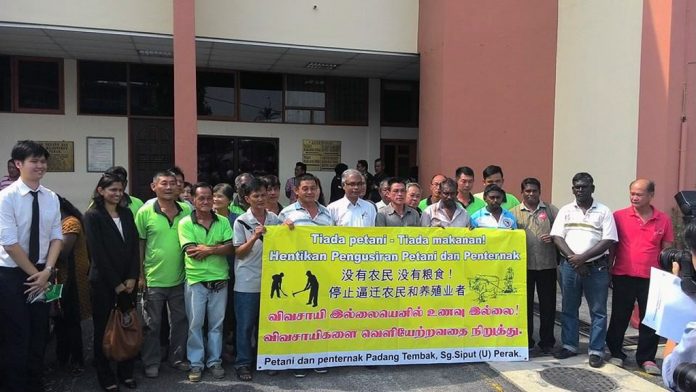 Jeyakumar Devaraj plans to lobby state governments to initiate an amendment to the National Land Code that would require them to set up a special committee to look out for the interests of small farmers on government land.

On 13 April 2016, the Taiping High Court judge informed us that he could not give us the order that our nine small farmers had petitioned for.

“I am in sympathy with your farmers,” he told our lawyers, “but I have to keep within the law when making decisions.” So he dismissed our judicial review application and ordered costs of RM2,500 against us.

We filed the application for judicial review at the Taiping High Court in July 2015 asking the court to order the Sungai Siput Land Office to give us at least one year notice as well as assistance in finding an alternative site for farming and animal husbandry. Our nine farmers had been served a notice in April 2015 to evacuate within two weeks or face a RM10,000 fine or jail sentence of one year.

We wrote to the land office asking for assistance in getting alternative land and, when that did not yield any response, to the Perak menteri besar of Perak as well. Finally, in July 2015, we decided to proceed with the judicial review application as that had to be filed within three months of the date of issue of the notice.

The Taiping High Court judge is correct: there are no provisions in the current National Land Code that could serve as a basis for an argument that our nine small farmers should be given a longer period of notice and/or help in identifying alternative land.

The Land Code does not recognise farmers who are tilling state land without any permit or licence (though some of them might be second-generation farmers who had applied for land grants previously and were turned down).

But there was a silver lining. After dismissing our case, the judge suggested to the DPP representing the state government that perhaps he could arrange for a meeting with the state authorities to try and resolve the issue. The gentleman agreed, and our lawyers have already sent a letter requesting a meeting.

In the meantime, our lawyers have indicated that we will be appealing this matter to the appeals court and will be putting in an application for a stay on the April 2015 notice until the appeals court decision.

Judges have to stay within the law. But laws are man-made, and the National Land Code is derived by the principles that governed land law during the colonial period – overwhelming power to the state authority!

Jeyakumar, the PSM MP for Sungai Siput, attempted to amend the National Land Code by introducing a new section 214B that would require all states to set up a special committee that looks out for small farmers on government land who are affected by alienation of this land for any purpose.

This amendment, which was in the form of a private members’ bill, was rejected in chambers by the speaker in March 2015. The speaker ruled that such initiatives had to come from the states, through the national land council, to Parliament as land is entirely the prerogative of the states. (The speaker is probably right on this!)

But that should not stop a caring government from getting its state governments to initiate such an amendment.

One of the decisions our group has taken is to use the reprieve won through filing our appeal to lobby the Pakatan governments of Penang and Selangor to sponsor the necessary amendment to the National Land Code. The battle continues!