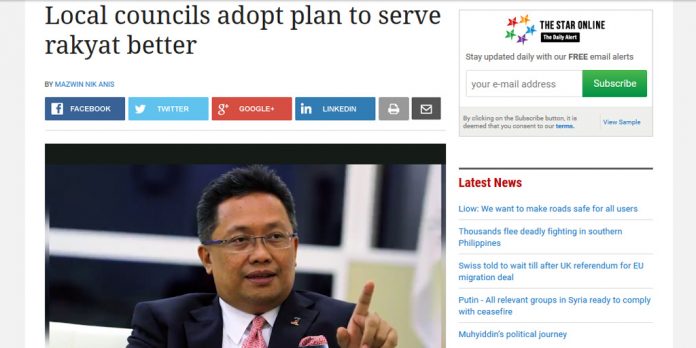 Francis Loh looks at the federal government call for greater efficiency, accountability and transparency in local councils – and explains how its new plan fall short.

Imagine, Urban Wellbeing, Housing and Local Government Minister Abdul Rahman Dahlan is pronouncing that local councils must make publicly available all information regarding their expenditure (theSun and The Star, 24 Feb 2016).

He elaborates that this is one of the eight points of the federal government’s plan to transform local councils. The plan, with the theme of “PBT di hati rakyat” (Local council is at the people’s heart), also highlights the need to set up or work towards:

In a world where ‘data is at our fingertips’, “if the data is shared, the people will know where their money goes”. The plan also includes conducting ‘town-hall’ meetings to better engage with the people.

You might find it strange that the BN government is echoing the Pakatan’s call for a CAT government. Calling for competency is not new, of course. Presumably, the BN federal government’s Grand Transformation Plan is all about becoming more efficient in delivering services to the rakyat. But calling for accountability and even transparency? A little strange, no?

Even more strange that minister Rahman is the one calling for this ‘transparency’ and ‘accountability’. For this same minister is among those Umno leaders who have called for disciplinary action to be taken by the party against former deputy prime minister Muhyiddin, including for his suspension.

At base this is because Muyhiddin has dared to call prime minister Najib to be transparent and to account for the RM2.6bn ‘donation’ that came into his personal account.

Then again, perhaps it is not that strange for Rahman to talk like this. After all, he is the BN’s so-called strategic communications chief. He is active on his Facebook and has consistently made silly and strange remarks.

Among other postings, he denied claims from the very start that there is any link between 1MDB and the donation to the PM. He also argued that the task force to probe the RM2.6bn donation was illegally constituted. And when told that the attorney general had been removed, he inadvertently stated that the PM had “to take people out after the draft charge emerged”. Oops!

He was one of the first to claim that the Wall Street Journal was out to destroy the country. On this score he moved, perhaps, too fast – in his support of Lester Melanyi, whose allegation that Sarawak Report was spreading blatant lies on the 1MDB fiasco proved to be false. Not least, Melanyi turned out to be an unreliable source of information who had never worked for Sarawak Report.

Not just that, Rahman, reportedly stated that it was “better for [the] Umno president to hold the money [donation]rather than proxies”, when trying to rationalise the RM2.6bn in the PM’s personal account.

Last month, he was condemned by netizens for sending in bomba to clean up the bauxite-mining affected areas around Kuantan, rather than going after and holding the mining companies, legal and illegal, accountable for the horrible pollution they had created.

Meanwhile, we read that the tabling of the audited 1MDB report to the PAC has been postponed again. Initially, the tabling was supposed to have been done in December 2015. Then, the new PAC chair Hasan Arifin promised that it would be tabled on 24-25 February 2016. Those dates have come and gone; it looks like it will now be tabled in March 2016.

Yet, the preliminary report by the auditor general on 1MDB, which was sent to the PAC on 9 July 2015, cannot be made public until after the full report has been tabled in Parliament. So we have to continue to wait with bated breath.

The newly appointed attorney general has also announced that he wants to strengthen the OSA. Reportedly, he wants punishment for those leaking government secrets to be increased to life imprisonment and to 10 strokes of the rotan. He reportedly stated too that journalists who protected their sources may be charged.

So, what can one make of the proposal by Rahman’s ministry to promote competent, accountable and transparent local councils?

Indeed, if one wants to promote CAT-like government, bringing back local government elections is critical. No doubt, elected councillors will be more accountable when the rakyat can get rid of them in a follow-up election. There is no secret about this.

Any initiative to transform local councils must involve constitutional changes, new laws to transfer functions, revenue and taxing powers, and personnel and the revival of local government elections.

Learn from Indonesia and Philippines?

In neighbouring Indonesia, after Reformasi 1998, the new constitution and two new laws (No 22 and 29) passed in 1999, provided for decentralisation of some 10,000 functions and responsibilities from the central government to the provincial, kabupaten and local governments.

This ‘big bang decentralisation’ also included providing more revenue (90% of house tax; 80% of land tax, and forest and fishery revenue; 15% of oil revenue; 20% of gas revenue) to those subordinate governments. As of 2001, more than 2.25m government officers were also transferred from the centre to lower levels of government.

Local and regional governments were also allowed to use their local languages and cultures in official settings. Greater autonomy, including more revenue, were provided to Acheh and Papua to help resolve the regional conflicts there.

Provincial and local government elections followed. In this context, perhaps we should take note of a certain Joko Widodo, a small-time small-town businessman, who first contested successfully to become mayor of Solo in central Java, moving on to the governorship of Jakarta, before he successfully contested for the presidency of the country.

In Philippines, too, another exensive decentralisation process has occurred over the past 30 years. After Marcos was overthrown, the new Constitution 1987 also addressed the question of sharing power with the provinces, municipalities, townships down to the barangay.

A New Local Government Code 1991 was passed to provide for this. Two autonomous regions (Mindanao and Cordilleras) were also created. As in Indonesia, more revenue was allocated to the regions and local governments (who received 40% of internal revenue collections). Central government officers were also transferred to the lower levels of government.

Elections for both the executives and legislatures for all levels were introduced, allowing for the emergence of new parties with new interests in local governments, displacing the traditional parties controlled by the oligarchy.

In the local councils, civil society organisations were reserved seats to sit in developing, planning and tender committees and in the schools and police boards too. Meanwhile, indigenous peoples’ traditional councils were recognised and were allowed to pursue ancestral lands claims.

There is much to learn from these examples of decentralisation occurring in our Asean neighbours. There is no doubt that the local levels of government in these two countries have become more vibrant and more engaging with the people, more accountable and transparent in their financial dealings too.

Reportedly, the regional economies are also expanding. Note, however, that they have launched comprehensive decentralisation programs to share power, law making, revenue and personnel with all levels of government. And have regular elections too.

The Urban Wellbeing, Housing and Local Government Minister Abdul Rahman Dahlan should look at these experiences seriously. Simply calling local councils to engage more with the public by holding town hall meetings and sharing information of revenue and expenditure will not transform our local councils.