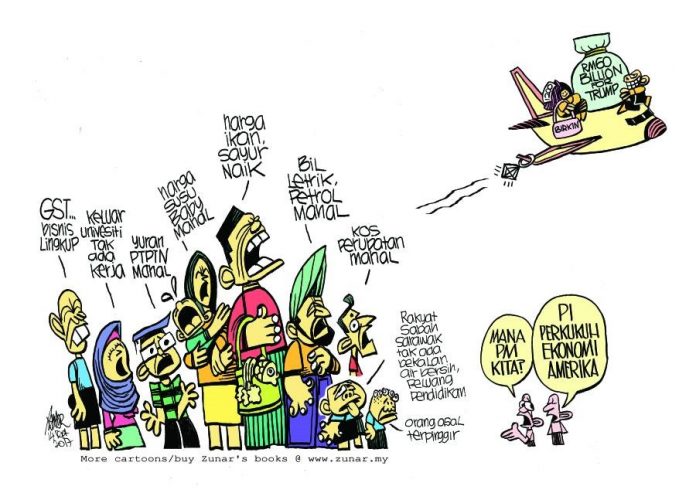 Before Najib starts to show off by trying to help the US economy, which is 62 times the size of ours, he should first look at why Malaysians feel so despondent, writes Anil Netto.

It is ludicrous to hear that Prime Minister Najib Razak wants to pump more Malaysian money into US infrastructure and Boeing planes to boost the US economy, which has a GDP of US$19 trillion. He should first handle the serious structural problems facing the Malaysian economy (GDP US$296bn).

One of the major structural problems lies in the housing sector. Reports indicate the property market in Malaysia is slowing down. And yet many buyers are still unable to secure bank loans to buy homes, many of which are priced beyond their reach.

This has prompted Urban Wellbeing, Housing and Local Government Minister Noh Omar to come up with a ‘bright idea’. He reportedly announced that property developers could apply for moneylending licences! According to the Edge, the Moneylenders Act 1951 does not have any provision to restrict developers from applying for such licences.

But everyone knows that the real issue is not that the banks don’t want to approve housing loans.

There are two real and related problems.

First, most Malaysians don’t earn enough to qualify for housing loans. In 2015, the median salary/wage was just RM1,600 and the average (mean) was RM2,312, according to the Salary and Wages Survey Report 2015.

The median household income stood at RM4,585 in 2014 rising at the rate of 11.7% annually. So why aren’t Malaysians feeling better off? Perhaps because salaries and wages are increasing just minimally at a time when the costs of food, petrol, healthcare, and education have soared. The GST and the removal of subsidies and slashing of budget allocations have also added to the burden.

If RM4,585 is the household income, then according to one definition of affordable housing (three times annual income), homes should be priced not more than RM165,000 to be considered affordable.

The average Malaysian household is saddled with loans and heavily burdened. Household debt has climbed to 89% of GDP in 2015 from just over 60% in 2008, reflecting rising indebtedness mainly due to high home and car prices.

Second, there is simply not enough genuinely affordable housing. Seeking higher profits, many property development firms, some of them with government-linked firms as major shareholders, have been building way too many homes priced above RM250,000, which ordinary Malaysians can’t afford. Indeed, only 21 per cent of new homes launched in 2014 were priced below RM250,000. You see the problem?

This pricing mismatch between demand and supply is not sustainable. As it happens, the approval rate for housing loans has dropped by 13% year-on-year in July 2017 – the 18th consecutive month it has fallen (The Edge, 12 September 2017).

It is not because the banks don’t want to lend. But what to do? Applications for housing loans have dropped by 12% in July 2017. This suggests many are unable to afford the available houses in the market, either because they are priced too high or these potential home-buyers don’t earn enough to qualify for loans or both.

This in a nutshell is the problem. So it is not surprising that unsold properties rose by 16% to RM9.4bn in the first quarter of 2017 (The Edge).

This is what happens when the housing sector is motivated solely by profits and the responsibility to provide affordable housing is left to the dictates of the Market. Not a few developers appear to be building high-end homes (simply because they can make more profits from such homes) targeted at foreign buyers (simply because Malaysians can’t afford such homes).

In the end, the developers themselves end up facing difficulty selling such high-end homes as there aren’t enough foreign buyers – especially when China upset the developers’ projections and restricted the outflow of funds from its nationals for foreign property purchases. So now we have silly proposals to encourage Malaysian property developers to become moneylenders!

Still, not many will feel sorry for the banks if fewer people are approaching them for housing loans now. After all, the bank were happy to finance developers who were merrily building high-end homes that few Malaysians could afford. Should the banks now wonder why many more people are not eligible for hefty housing loans to buy these unaffordable homes?

So before Najib starts to show off by trying to help the US economy, which is 62 times the size of ours, he should first look at why Malaysians feel so despondent and pessimistic – unable to afford new homes and finding it so difficult to cope with rising food prices – despite rising household income, GDP growth, BR1M and what-have-you.