Home TA Online After a grim year, let’s give each other hope this new year 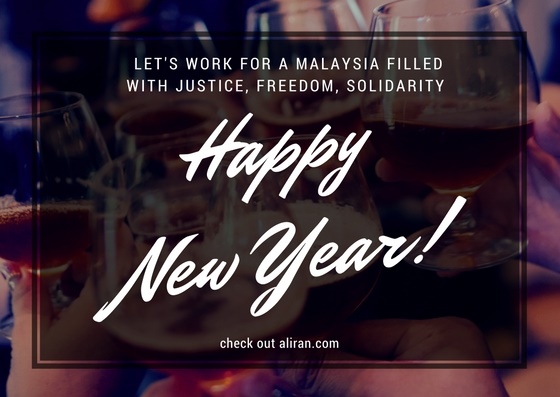 Politicians must put an end to the manipulation of race and religion for personal gain. That is one of Jem’s wishes for the new year.

Christmas is over. Sadly, for the Catholics, there were no public masses in all parishes, churches and chapels in the Archdiocese of Kuala Lumpur.

It was a hard decision for the archbishop, but it had to be made for the sake of the community. Most avoided holding large family gatherings. We all had to make do with what we had, each in our own way.

I have been mulling over the year just ended. What hopes did the country have for 2020? Vision 2020 was the tagline.

But what a messy year it has turned out to be. Covid-19 ravaged the world, which maybe was nature’s way of telling us to stay out of its territory. An elected government was replaced by another, all because of the greed of others.

I scoured the media, read much and heard much from others, family and friends, and the theme running through all the conversations was one of utter disappointment.

Let’s begin with Covid. The front page of a newspaper (Sunday Star, 27 December 2020) showed a masked security guard with an assault rifle slung over his shoulder, pointing downwards. He was standing behind a group of families at Zoo Negara, where a show was about to start.

Why would Zoo Negara need a soldier with an assault rifle to be on duty at a place where families gathered? Were the zoo personnel expecting animals to run amok? It was quite a startling photo, although it was good to see people wearing masks. But where was the social distancing? If the soldier was supposed to enforce it, he wasn’t doing a good job.

The tight movement control restrictions have been lifted. People are travelling. Resorts have opened.

And, in case nobody has noticed, total Covid cases in Malaysia have soared over the 100,000 mark. Najib Razak, of all people, questioned the Perikatan Nasional government about what it was doing to curb this surge in infections.

What is the Ministry of Health doing? It is one thing to keep regurgitating numbers from all over the nation at daily press conferences, but what is actually being done?

We were once crowing about how well we were doing in keeping the numbers down and how we were “flattening the curve”. Are we? Did we? What is the rate of transmission figure now? Is this figure a reliable indicator of how widespread the infections are now?

Will something be said only when the prime minister and his people are sitting in front of television cameras being publicly vaccinated? Will this government then tell the people that everything is fine because the vaccine has arrived?

Hopefully, someone will explain to those who are sick, those who are intubated and those families who have lost loved ones how the government has failed the people.

So, what else are we all hoping for in 2021? Many have expressed their hopes, and here are just a few.

Let’s hope for an end to this pandemic and all the suffering it has brought to millions throughout the world, including here in Malaysia. Hopefully, the vaccines, which the government said will be available in February or March 2021, will ease the situation, if they are found to be safe and effective. And hopefully the government will keep its word and provide the vaccines for free.

We need to have a government of people with brains, integrity, honesty and the guts to stand up when something is not right. We need people with a backbone, with a conscience.

We need to get rid of those who are just plain incompetent, those yes men, and those same people that have been in politics from the beginning of time.

We need new faces, new ideas and the opportunity for young people to emerge and begin a new generation of politicians. This generation is out there. It is just that they have become so sick and tired of all the utter nonsense spouted constantly by the present lot that most have turned away or migrated.

Politicians must stop manipulating race and religion for personal gain. Stop pitting one race and religion against another. We have become so selfish, so cruel and just plain evil. The time for that kind of politics and hypocrisy must stop.

Let’s hope that those found guilty of corruption will be given hefty jail terms and fines. Judge must be honest and fair in their judgments. While awaiting their appeals, convicted persons should not be allowed to go around with their large entourages, behaving as if they have done nothing wrong. By the way, who is paying for all their fancy cars, staffing and security?

I know this wish-list is a bit of a stretch, especially considering the politicians we have in government. People who may read this will laugh and say, who is she trying to kid? But who knows? Stranger things have happened, and we must have some optimism going into 2021.

So, as we tiptoe into 2021, let’s give each other hope. Let’s each try to be kinder and give a thought to those less fortunate than us.

Let’s not forget what we have had to go through in 2020, which might continue into 2021. Let’s see ourselves in a fresh way, so that all we have learned about ourselves – the good, the bad and the ugly – in 2020 will not go to waste.