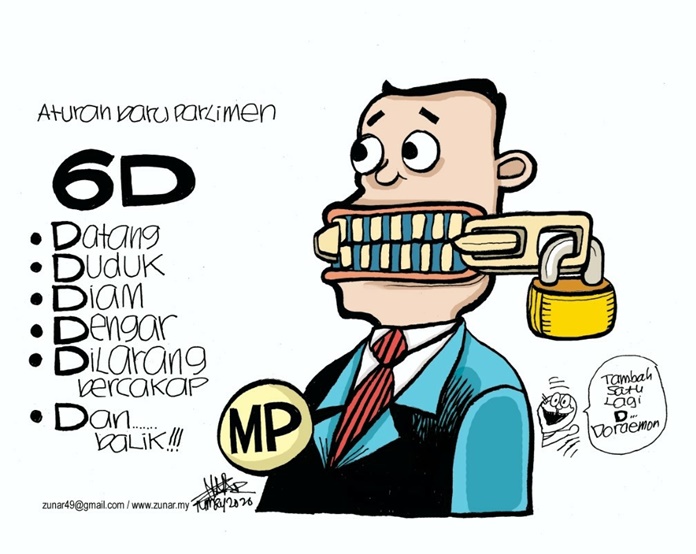 If they are allowed to steal our Parliament, what is there to prevent some unscrupulous people from looting without a care in the world, P Ramakrishnan writes.

We don’t know what is Prime Minister Muhyiddin Yassin’s fear. Is he scared that MPs might catch Covid-19 or is he worried that Parliament – the building – would be infected by this virus? It has not been explained, but he has decided that Parliament will not function as it should!

On 18 May there will be a meaningless, symbolic convening of Parliament with 222 members of Parliament and 100 senators converging on Parliament – Covid-19 or not!

On 18 May strangely, MPs will have no duty to discharge, no obligation to represent their constituents, no compulsion to speak for the nation. In short, they will have nothing to do. But they will collect their parliamentary allowances nonetheless and go home!

Outstation members will have to arrive a day earlier – which means transport, lodgings and cost of living allowances have to be provided inclusive of the various allowances on the day Parliament convenes.

What would be the total cost for 222 MPs and 100 Senators who have to be paid similar perks for their attendance just for an hour or so for the 18 May session? So much expenditure has to be incurred for doing nothing! It is a criminal waste of public money! This cannot be justified under any circumstance.

Muhyiddin’s legitimacy as Prime Minister will not be settled even though a motion of no confidence was earlier accepted by the Speaker. Now, this will not be put to the test. We will not know if he would have survived the vote of no confidence. It will be placed forever in the realm of speculation.

With this turn of events, we can safely assume that Muhyiddin indeed does not enjoy the majority support of MPs. Here was a golden opportunity for him to silence his critics and sceptics who question his right to be PM. But he does not want to risk his present pre-eminent position in permitting Dr Mahathir Mohamad’s motion of no confidence to be tabled. He must have seen the danger and decided to disallow that motion.

Not only that – his reputation was at stake as well. Mahathir has been adamant in claiming that at the material time when Muhyiddin was sworn in as PM he did not have majority support with him. According to him, Mahathir had that majority backing him contemporaneously. If Parliament was allowed to function as it should, there could be a possibility of Muhyiddin being exposed as a liar. That would be a terrible blow for his reputation and ego. He does not dare take that risk.

Muhyiddin has raised RM260bn through loans and other means to kickstart the economy. We will never know how he raised that money and from where it was borrowed. We will never know whether the money is being spent wisely. He is not accountable to anyone! His position is like that of a dictator with wide and sweeping powers to do as he likes without being deterred. He has absolute power now.

Whether his policies are the best or the only ones that are best for the country will not be debated simply because he has denied MPs the opportunity to act as part of a mechanism of checks and balances that Parliament always epitomises. Even if these policies are deemed to be a disaster, they will continue because he is not accountable to anyone.

Ultimately, the huge loans taken to finance the stimulus package cannot be written off. They have to be settled. How is he going to find the money to do so? These borrowings are going to be a heavy burden for Malaysians, who may have be taxed to raise the funds. Yet, our MPs have no say whatsoever to speak on our behalf.

Muhyiddin stole our government – is he now set to destroy our parliamentary democracy?

We cannot give Muhyiddin a free hand to do as he pleases. It will be disastrous for the nation. He must be reined in. For this, the people’s participation is necessary and vital. They have to speak up! They have to take a stand!

We sought their help in an article that I wrote on 9 May 2020 “Muhyiddin stole our government – don’t let him steal our Parliament!” In part, the article read:

All the political parties, PKR, Bersatu, Amanah, Warisan and the DAP, have a duty and an important role to play in this campaign. At the end of the day, we will know how well you fought the battle and how serious you were in defending our freedom and upholding our parliamentary democracy.

It is doubtful if these political parties cared to get involved seriously in this campaign.

A million and more Malaysians calling for a meaningful sitting of Parliament would make a far greater impact on the fabric of society than 113-114 MPs shouting until their voices are hoarse. This is something the opposition politicians have failed to realise.

It doesn’t appear that they really cared to send out a message to their members. Except for Lim Kit Siang, who publicly urged Malaysians to support the petition, no leaders from the other political parties cared to get involved or lend their support in this attempt to bring pressure on the government.

Still, it is not too late. Get your membership involved now. Let’s go for that million signatures. Go for goal. Let’s bring the moral weight of the nation to bear on Muhyiddin. Let’s not allow Malaysians to forget that this bunch of crooks stole our duly elected government and made a mockery of our Parliament.

If they get away with this, they will get away with everything else in the future. If they are allowed to steal our Parliament, what is there to prevent some unscrupulous civil servants and dastardly politicians from looting without a care in the world, just like Najib and his cronies allegedly did?

The petition is one way to keep the fire burning. After 18 May this petition will no longer be tied down to the demand for a two-week sitting, but it will be a judgment on Muhyiddin on how he has abused our parliamentary tradition.

Always remember, “It is the right of a democratically elected Parliament to act in defence of our traditional liberties, and everything should be done to keep it that way.” – Jeremy Corbyn