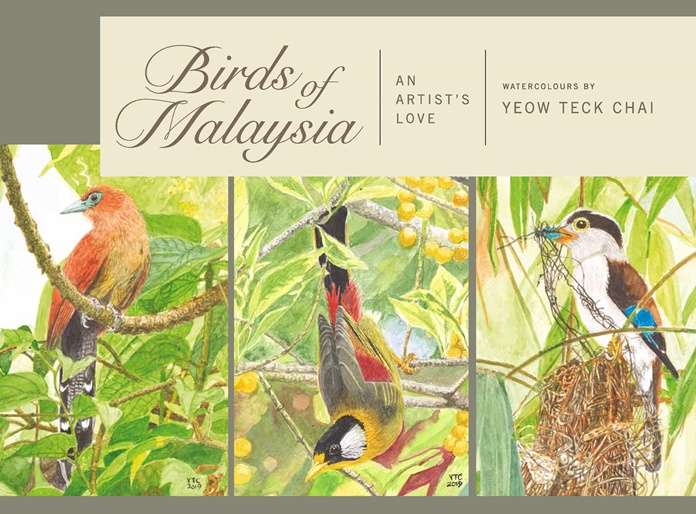 The artist Yeow Teck Chai, however, is alarmed by the rapidly dwindling biodiversity in Malaysia. Benedict Lopez reports.

As a carefree kampong boy in his younger days, Yeow Teck Chai was struck by the melodious chirping of birds in the jungles around Kuantan.

As his curiosity deepened, he learned to imitate his feathered friends by responding to them with different bird calls. His interest in birds kindled, he reared a few species like the common myna, spotted doves and zebra doves at his home.

In the later years of his life, Teck Chai’s love for birds has intertwined with his passion for watercolour painting. That led him on a journey to paint a fraction of the thousands of bird species in Malaysia. He drew inspiration from the portraits of wild birds by Dr Samuel Ong and Francis Chin.

These days, a unique alarm bell rouses Teck Chai from his slumber – the continuous squeaking of his feathery buddies outside the window of his home, as they welcome the crack of dawn.

Narrating his love for birds, he says, “One can also dream through the stroke of a brush, a new generation of Malaysians can discover the splendour of birds in our environment and the need to conserve and grow our precious ecosystem.”

Does he have any concerns about our ecosystem? Teck Chai, who turned 70 this year, laments that the forests and jungles of our beloved country are no longer the same as the ones he trekked as a young boy. “Their footprint is shrinking every year and our rich biodiversity is dwindling at an unbelievable pace.”

His only hope is that none of the bird species printed in his latest book will become extinct by the time his little granddaughter is old enough to appreciate them.

His book, Birds of Malaysia – An Artist’s Love, is a measure of gratitude for a long and well-lived life. His aim: to raise funds for two organisations close to his heart – the SSMH, a society that supports the intellectually disabled, and the SLE Association of Malaysia, a non-profit that supports people living with systemic lupus erythematosus.

In 2018, Teck Chai held a solo art exhibition Paintings from the Heart at the Annexe Linkway of Bangsar Shopping Centre in Kuala Lumpur. The paintings on display showcased his childhood, his impressions as a youth, and his extensive travels all over the world. The bulk of the proceeds from the sale of the paintings again went to the SSMH Society and the SLE Association. He was also one of 22 artists featured at an SSMH exhibition Art for Good the following year, which raised funds for the society.

A former colleague of mine at the Malaysian Investment Development Authority (Mida), Teck Chai had a distinguished career, serving the organisation for 32 years (1974-2006) before retiring as deputy director general.

Besides working together in the industrial promotion division, we were both contributors for Mida’s newsletter Midas Touch in the 1990s. While I wrote articles, Teck Chai used another of his talents as a cartoonist – his famous Durian Talk cartoons series featured “comically serious discussions among a group of durians about Malaysian matters”.

Upon retirement, he imparted his wealth of experience to the corporate sector by advising companies on various investment-related matters. Age has not slowed him down, and he continues to serve companies in various capacities.

A man of generosity and humility and ardent believer in justice, fairplay and human decency, Teck Chai takes no credit for his ability as a creative artist in water paintings. Few in his position epitomise these virtues as a human being, as many others like him succumbed to the apple polishers, discarding and victimising exemplary officers.

All proceeds from the sale of this book will be donated to the SSMH and the SLE Association.

Looking back at his indefatigable efforts, time spent and all his invaluable contributions to less fortunate members of society, all I can say is keep up the good work, Teck Chai. You have done yeoman’s service for society-at-large.

God bless you, my friend.