Home TA Online Can Umno resurrect itself and reclaim its glorious past? 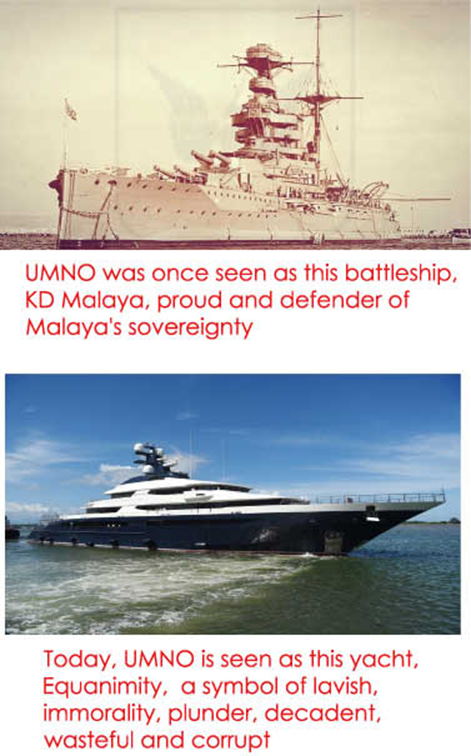 Its leaders will first have to discard the party’s racist and thieving past and move the party to the centre – but this will be a herculean task, writes Choo Sing Chye.

The Conservative Party, which leads the present government of Britain, started life as a villainous mob.

In the 17th Century, the Tories (Conservatives) were robbers who roamed the Irish countryside in plundering bands, robbing and looting (Florence Elliott and Michael Summerskil, A Dictionary of Politics, Penguin Books). Apparently all these villainous acts in Ireland earned them the nickname “Popish Thieves”.

In 1832, they called themselves the Conservatives and they reinvented themselves in the decades that followed to become one of the strongest parties. Today, the Conservative Party bears no resemblance to its roots although it is still referred as the Tories. More importantly, it had exorcised its thieving past.

But in the case of Umno, it is different. About 70 years ago, Umno started off as a grand and honourable party. Many of the top leaders were gentlemen, and they based their core principles solidly on racial harmony and unity.

It seemed that Umno was right the first time for it shared many good traits of a decent party. It was also often in tune with the moderate ideological platform of the Conservatives and the Labourites – but not now. Now it has degenerated into a far right, racist and thieving party, plundering at will.

Under Najib, Umno went through a big political shift. In a few years, it went from soft to extreme right. More often than not, its behaviour was indistinguishable from the fascists.

If one were to pigeonhole Najib’s political scheme through his administration, one could safely correlate it with the likes of Adam Walker of the British National Party, Marine Le Pen of the National Party and Geert Wilders of the Party for Freedom of the Netherlands.

These characters from Europe hate the Muslims and the coloured immigrants. The narrative that they used to define the minorities is interchangeable between the far right in Malaysia and Europe. In Europe, the far right accuses Muslims of taking over the country; in Malaysia, the targets are the Christians and the Chinese.

Consequently, what all these far right-wingers do best whether they are from Malaysia, Britain, France, Germany and Netherlands is to ferment hatred towards the minorities.

Their action is not that of a betrayal, but a punishment – payback time for all the bullying and religious bigotry that they had to endure while in the BN fold.

For Umno to reclaim its glorious past, its leaders have to discard its racist and thieving past and move the party to the centre. This, however, would be a herculean task as the party has gone too far to the right to be a suitable fit in multiracial Malaysia.

Of all the party election candidates vying for the president’s post in Umno, only Tengku Razaleigh Hamzah, fits the bill as a moderate centrist. The rest are just cut-and-paste leaders of the Najib era.