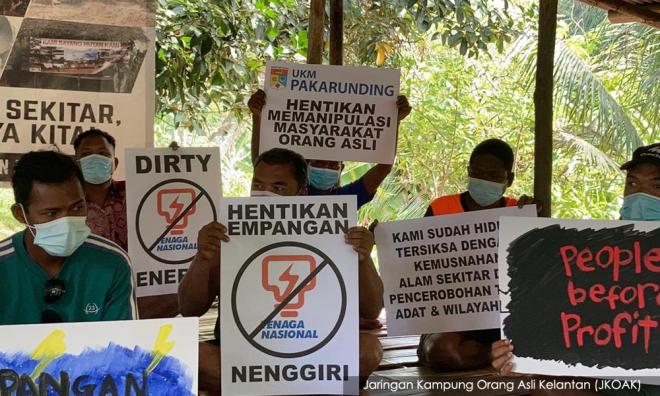 Based on a recent announcement, the Kelantan state government and Tenaga Nasional Berhad (TNB) are expected to start work soon on the Nenggiri dam project.

Why the haste for them to sign the agreement for the project to begin, when over 3,000 Orang Asli residents have voiced their objection to the proposed dam, which threatens to submerge their native customary lands? The project will destroy their homes, grave sites and the jungle, which is the source of their livelihood.

Unfortunately, like many other dam developers, the Kelantan state government and TNB have deemed the engagement session chaired by Suhakam and involving several government departments and the Orang Asli as sufficient proof that all relevant parties have agreed to support the project.

TNB highlighted that the Kelantan state government welcomed the project and that Suhakam was satisfied TNB had provided detailed information on the project implementation.

A search of the TNB, Suhakam and Department of Orang Asli Development (Jakoa) websites for further information produced no results, as was my attempt to contact the Suhakam commissioner concerned. Does this imply that the ‘detailed information’ either never existed or is classified (under the Official Secrets Act)?

Thus far, in the case of the resettlement of some Orang Asli villages that would be relocated, World Commission on Dams recommendations – in specific cases of water and energy development, particularly those involving new dams being planned – are simply ignored (Dams and Development: A New Framework for Decision-making – the Report of the World Commission on Dams. 2000, Earthscan, London).

Most importantly, the authorities need to gain the demonstrable public acceptance of affected communities. Indigenous peoples should have the right to formal, prior and informed consent to any water or energy project which affects them.

Equally important, rather than simply planning and building dams, the authorities responsible should assess the water and energy needs of society in a thorough and participatory process. They should evaluate the different options to address these needs (including demand-side management measures) in a balanced way.

Unfortunately, the state assumes the Nenggiri dam is necessary and desirable to generate hydroelectric power and prevent floods in Kelantan.

Hence, rather than following the recommendations of the World Commission on Dams, the state adheres to the conventional method of resettling those in the way. Much of the same old tune, before the resettlement, centres on promises of compensation, new brick houses, free piped water and electricity, jobs and business opportunities.

Only time will tell if these offers will be fulfilled. However, there is no lack of dam(n)ing examples: Bakun, Babagon, Batu … I have more examples from my own compilation of over 100 existing dams in Malaysia, small and large, where many of these promises were not delivered.

The centrally driven decision-making by the state and other powerful vested interests to implement the Nenggiri dam has largely followed the utilitarian logic of ‘displace and resettle those in the way’. Apparently, this is justified as a prerequisite for advancing the state’s ‘development’ agenda.

Despite some material gains through the compensation and rehabilitation packages, essentially no compensation is possible for the cultural, spiritual and other intangible losses of the Orang Asli. These include the loss of their ancestral lands, graves and the homes of their gods. Then there is the trauma suffered, individually and collectively, in the forced displacement and resettlement they have to endure, due to the dams.

At best, if the state government, TNB, dam builders and financiers really want to change the dam and resettlement implementation, they need to adopt some essential and new elements. More concretely, why not appoint some Orang Asli to sit on the board of directors and why not turn the affected Orang Asli communities into major shareholders of those institutions which reap the profits of the Nenggiri dam project?

If this is indeed implemented, the Orang Asli women and men representatives who are to be appointed as directors and shareholders should be nominated and decided by the community themselves according to their Adat (native customary) practice. Perhaps then, the Nenggiri dam can at least be seen as a business opportunity for the Orang Asli.

Carol Yong is an independent researcher and writer