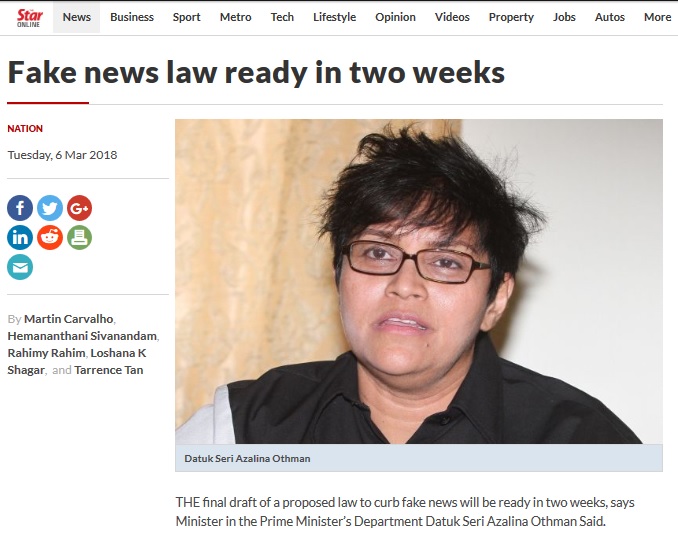 Are we committed to creating a value-centred, civic-minded and socially responsible country of citizens with this new law – or are we banking on creating fear all the way, wonders JD Lovrenciear.

The Malaysian cabinet gives the general and widespread impression that its seeming rush to have a fake news law in place is motivated by questionable agendas. This may be true or it may ultimately not be so.

But more important, what we are all missing out is the fundamental principles that must govern the enactment of any new laws.

Laws must be effective in providing citizens the freedom to enjoy a greater experience of democratic rights.

By curbing wilful law breakers, law-abiding citizens are assured of a better quality of life experiences. This is what the philosopher Emmanuel Kant terms as the “categorically imperative” duty of a government that has the power to enact laws in a country.

While fake news is a new, unstoppable and fast-spreading phenomenon in the world of the ‘free, independent and wild’ world-wide web, we must ask ourselves whether having such laws in place at great speed can guarantee Malaysians peace of mind in co-existence with another as we responsibly play our part in building a future for all citizens.

What our politicians are grossly missing out is also that sacred duty that rests on the shoulders of their vocation to tirelessly build a society of value-centred citizens. All of us have a great responsibility that must accompany our input into the social communication space that is now at the disposal of every human being – anywhere, anyhow and anytime.

Will the new law that is bound to be rushed through and instituted before this current and last sitting of Parliament, going by decades of experience, also hold politicians, policy-makers and senior public officers to account for how far they must go to create a society of responsible communicators or sharers of news?

Do the policy-making politicians have a road map in place showing us how they will go about carving out a responsible, value-centred society of people?

A society that is well schooled from young and right through the corridors of employment and power will succeed in curbing the spread of fake news.

Further, are our bastions of power willing to consider yet another pillar of truth: when some news goes viral, the onus is also on the government and those in positions of power and control to be quick to explain, provide evidence, clarify and allay doubts and suspicions in social media.

A society of people who are anchored in values will be an asset in fighting fake news generators.

Just take a look at our drug laws. Even the death sentence has been unable to stall the growing speed of drug addiction in the country over the past decades.

Sadly, the current government of six decades has been so bent on its version of progress and development that our value system today is nothing to shout about.

Just look at the way we drive or ride our vehicles on the roads. Do we not acknowledge that despite all the cameras, policing, laws and compounds we still see road users breaking every safe-driving guideline?

We text while driving; we speed without regard for the safety of other road users; we do not heed calls not to use the emergency lanes; we weave in and out of heavy traffic precariously just to be ahead of everyone else.

Our lack of social etiquette and civic-mindedness in so many other areas speaks volumes of a society whose once much-admired value-centred co-existence and respect has truly eroded – all in the name of the politically carved out march for supremacy through the Barisan Nasional’s brand of seeming development and progress.

Indeed, will the rush to enact yet another new law transform our society?

Indeed too, will the government continue to absolve itself of that moral and binding duty to educate, create and instil a value-centred society after enacting this fake news law? Or will this new law turn out, in truth, to be another weapon of war to seize and stay in power at all costs?

Every citizen, from ruler to subject, has a moral duty to ask how far we will go with this new law once it is passed and given assent.

Are we committed to creating a value-centred, civic-minded and socially responsible country of citizens with the benefit of this new law?

Will our policy-makers take charge of their responsibility to educate, coach and instil values that place personal responsibility in the dissemination of news?

Or are we banking on creating fear all the way?