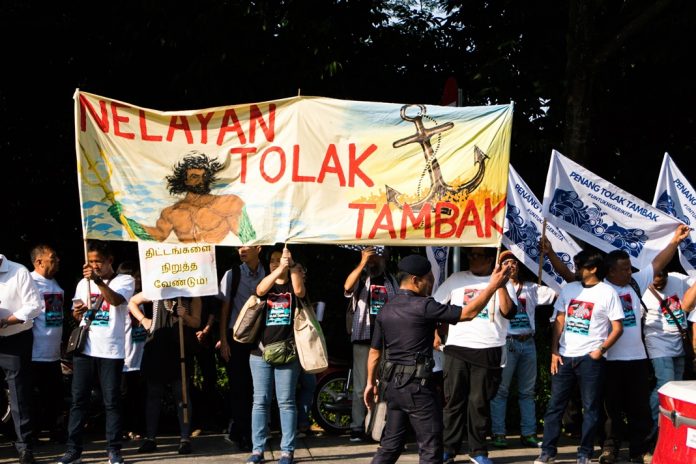 We cannot – must not – let our fisherman be inconvenienced by insensitive political and business interests, writes Dominic Damian.

It is easy to identify corruption with 1MDB and all the other related scandals. The traditions of moral teaching and laws will challenge such conventional corruption.

We are led to believe and conditioned to think of corruption as a specific act of illegality: giving something in exchange for some favour or advantage.

But is there something deeper, far more corrosive and more deceptive that is being camouflaged – and which has far-reaching consequences and impact? Yes!

Winning a majority can take politicians through a dark unknown tunnel, fraught with grave danger. We have supposedly changed a government for the better – or have we?

What about corruption of the conscience and soul? The best-intended laws and constitutional advancements are not designed to protect the vulnerable. Sometimes they can be an intentional impediment, with built-in escape clauses.

Why do fishermen have to march to Parliament to state their objections? Deprived of their potential livelihood and natural right to the seas, they are bound to be affected by reclamation projects. These projects will benefit the upper echelons of society with vested interests. The fishermen are deemed inconsequential.

The Orang Asli communities are struggling within a legal framework. Whatever rights they have may be a pittance. Isn’t the denial of their rights a corruption of the soul?

Missing or murdered persons have no recourse to any form of justice. There is an unholy and unbreachable wall of silence. A state within a state – a deep state – is believed to exist. Isn’t this corruption?

An election manifesto of promises has not yet been fulfilled. Citizens were enticed to vote for change. Citizens accepted in good faith the insurmountable difficulties in the path.

The government should demonstrate goodwill. A deficient response in fulfilling promises is a conspicuous sign of lack of respect: you and I are expendable.

All the above are possible signs of something deeper that often escapes the eye. After all, no one is seen and perceived to be actually ‘stealing’ anything. The justification for such acts is sanitised and supported by a coterie of laws.

The standard opinion that public acquiescence is needed to serve the larger good is contestable. Aquiescenece is nothing but blind slavery to enactments. It usually affects the most vulnerable and bows before the powerful.

The central question is, are people made for the law or is the law made for people? Soul-searching is a deep struggle.

Will the ones we elect be illuminated by personal principles? Will they shine with deep compassion? Will they question the questionable and object strenuously to the objectionable?

We are trapped in a pseudo-democratic system. Many parliamentarians invariably and slavishly toe the official party or government line. They seem unwilling to discharge their basic responsibilities to their constituents or to follow the dictates of their conscience. Often, their personal courage and conviction are but an illusion.

The nation has lost way too many battles over the environment. It is already proven from the past – as in the Taman Rimba case, where the direct beneficiaries could be those higher up and their cohorts. Isn’t this enough to say stop! Change!

The Bakun Dam, about the size of Singapore, has submerged and destroyed the natural environment. It has caused irreversible damage while a few reap billions. Isn’t this sacrilegious?

When will this madness end? When will we say no to this carnage by callous persons?

We must have a more meaningful alternative economic narrative. At present, the conventional financial growth and development techniques seem to profit the banks – and few others. The old methods take us down a repetitive never-ending cycle of death.

When will our parliamentarians accept real responsibility? When will they educate themselves about viable economic options or alternatives?

Are they aware that economic equality and economic equity are opposites? Equality doesn’t care who is able or disabled. Equity, on the other hand, ensures there is no disparity or disadvantage. There is a substantive difference.

So we need some clear legal checks and balances. Even the very best of our parliamentarians and government must never be granted blanket trust; otherwise, the potential for abuse would be like handing over a blank cheque. Some form of ombudsmen, constitutionally empowered and enabled, should be the last line of defence for the defenceless.

To witness the courage of old fisherman, walking in defiance to Parliament on 11 July 2019 was historic – and inspirational. But it was also gut-wrenching and painful to watch.

We cannot – must not – let our fisherman be inconvenienced by insensitive political and business interests.

All photographs by Camden Damian