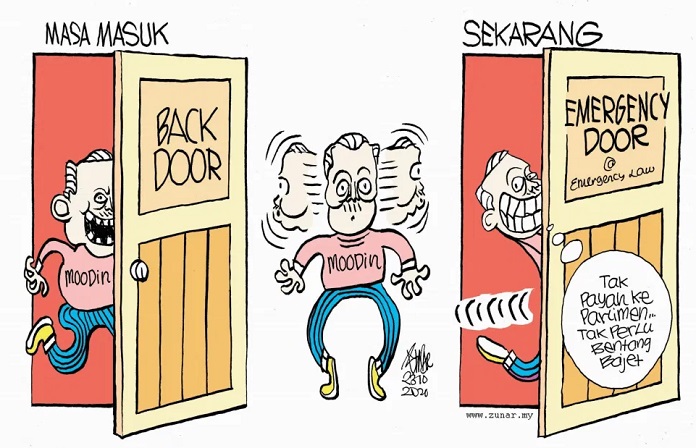 A lack of accountability and transparency culminating in the botched attempt to seek emergency rule has eroded confidence in the government. JD Lovrenciear writes.

It is disturbing to learn of the government’s decision-making in combating the coronavirus pandemic.

The Ministry of Health recently announced it would not reveal the locations where Covid-19 are detected to avoid stigmatisation. The health director general maintained that instead of disclosing exact locations, the better way would be sanitise those places.

In this climate of pandemic, is the problem of “stigmatisation” more critical to our wellbeing or would we be better served being well-informed about potential locations that should be avoided to help curtail cluster breakouts?

In this social media age, will the ministry’s decision really make a positive difference? Such decisions may only be counterproductive as allegations, fake news and speculation thrive in a climate of secrecy and non-disclosures, thereby creating more unease.

While this was going on, investigations into the biggest foreign bribery case in the history of the US enforcement measures yielded more results: Goldman Sachs admitted its role in bribing mysterious Malaysian officials.

Malaysians have remained cool about this revelation. Perhaps bread-and-butter issues and the fear of the pandemic are why we have been reduced to apathy over this by corrupt Malaysian officials.

Some may argue that just because a few were culpable in accepting bribes, it does not mean the whole government should be faulted. OK, accepted with a pinch of salt.

Wait a minute. US enforcement agencies took less than half a decade to bring a gigantic fund manager to its knees in contrite regret.

READ MORE:  The act of giving amid the Covid pandemic

But here in Malaysia, the very spring of this kleptocracy, we do not see any political will for closure and redress.

Instead, while we talk about “rule of law”, a convict remains in the august house of Parliament. Maybe the slogan “Malu apa, Bossku” (Where’s the shame, Boss) has made many of us apathetic to bribery.

His supporters argue he has a right to appeal the conviction and as such is still not conclusively guilty as charged.

But with or without dissolution, Parliament – the pinnacle of our parliamentary democracy – is already perceived as tainted. We have a backdoor government calling the shots in Parliament.

We have seen some parliamentarians, widely perceived to be above the law, behaving unashamedly. But they have been absolved of having breached the movement control order.

Have the constitutional rights of citizens been compromised as a result?

A message to Muhyiddin

Dear PM, it is best you step down immediately.

Many have lost their trust in your backdoor government. Your move to seek a declaration of emergency for Malaysia was the cruelest blow to the people.

Enough. Please step down immediately. Please be humble enough to take responsibility for the hurtful failures of your suddenly hatched government and stand meekly before God Almighty.

In the best interests of this still shell-shocked nation, please do the honourable thing.

As the dust of acute anxiety settled after that botched move, the sitting prime minister and his close political advisors should take responsibility over their ill-conceived attempt to seek an emergency declaration. Their flawed decision has caused the nation untold pain.

READ MORE:  The fourth session of Parliament: What should be the people's expectation?

Foreign media were watching us. Many individuals rose to object against the move. Businesses were almost stopped right in their tracks, fearing the worst. The streets were nearly deserted, free from a usual weekend of traffic. Shops and restaurants must have lost much business.

Having a backdoor government in power had already led to a trust deficit in the country. But when the leadership of Perikatan Nasional makes such a dangerous move, the people are justified in demanding immediate accountability from the prime minister and his advisors.

Muhyiddin and his cabinet have only themselves to be blamed if many now question their intention and suspect their capability. The honourable and right thing to do would be to resign.

Surely our beloved land is not short of able leaders. After all, the civil service is capable of continuing its good work during the pandemic.