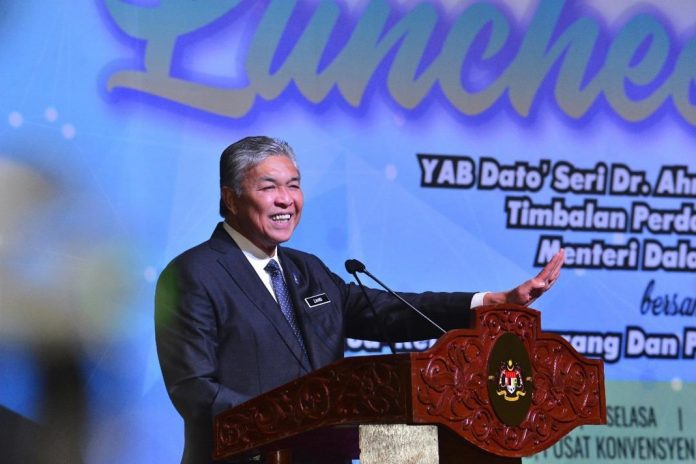 Home Minister Ahmad Zahid’s Hamidi addressed and engaged with a crowd of some 500 representatives and heads of the print, electronic and online media at a luncheon talk yesterday at the Putrajaya International Convention Centre.

What needs to be acknowledged is the fact that the deputy prime minister not only shared his understanding and hopes ahead, but he took an unbeaten path to engage with the media chieftains on stage.

By posing relevant and priority questions to specific doyens of the local media and further inviting all present to share their thoughts on pertinent concerns among media operators and journalists, the deputy prime minister successfully garnered votes of acknowledgement.

The rousing applause from the audience attested to the fact that such engagements are not only promising but more importantly it also revealed the Home Minister’s appreciation of the battles faced by media and his readiness to take it to the next bastion of resolutions and right actions.

Indeed the Home Ministry must be congratulated for the effort taken in bringing the media together to not only hear the hopeful truths direct from the horse’s mouth, but more importantly for designing this talk, which in reality was a ‘luncheon interface with media’.

Such milestones are important in a climate of growing concern and especially in the wake of the plans to enact a ‘fake news’ law in Malaysia.