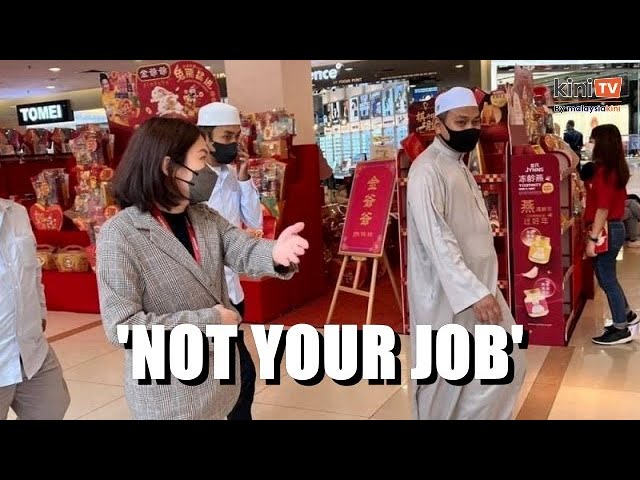 Recently, an MP visited a shopping mall in his constituency to express discomfort about alcohol being displayed in the open.

He was apparently acting on complaints from his constituents.

With due respect, the MP in a way is implying by his own action that a faith is weak and the persons who practise it are weak. He is, in effect, insulting the faith and its adherents.

Is the MP dictating to others what, when, how and where we should purchase and consume drinks? Why should we follow his dictates? It is unacceptable and disrespectful when one imposes his or her morality on others, based on religion.

A religion is only as strong as its understanding towards those who are not adherents.

As far as I know, the faith is impregnable and incontestable in its true values. My good Muslim friends in a couple of online groups are a living testimony to their faith.

What the MP has done is an abomination of his party’s politicisation of Islam.

I don’t trust political religious characters. They show they are ‘defending’ the faith – but what an intentional toxic misinterpretation of faith. The faith is not weak; they are the ones who are weak and make it look weak! If one’s faith has genuine strength, one does not need to be intrusive or divisive.

READ MORE:  If Pas rules, the lights of freedom will grow dim

They also advocate nonsensical government regulations. If one’s faith, inner sense of morality, spirituality and discipline are strong, one does not need such controls.

Liberty must never be surrendered. There always seems to be the illusion of greater security among people who choose an individual because they assume he or she knows God better.

The misappropriated representation to act on behalf of God with frivolous piety is damningly evident in this alcohol case. Does this person offer God in deeds that reach and speak to each person’s soul? That seems absent here.

The MP in this case serves only one segment of the community. But his salary is paid by the people – both Muslims and non-Muslims.

Perhaps the government should ‘pro-rate’ and reduce the MP’s salary and allowances based on his desire to represent only specific communities to the exclusion of others. Consider it shameless if the MP takes a full amount and does not represent everyone.

No matter how righteous one may be, if one’s faith wounds or inconveniences another, one is wrong. It is as simple as that!

The MP and folks like him seem to be paranoid about:

In no way should we consider individuals who obsess over such frivolity as good Muslims. They are unworthy of a beautiful faith. We must enquire of the MP where his conscience or discomfort is over:

READ MORE:  Has the dust settled for Anwar or will he face swirling sands ahead?

The above issues do not seem to be his priority. Instead, for him, alcohol seems to be the principal topic. The priorities of faith teachings are muddled.

There are so many other important issues and concerns. Are those listed above not central to the teachings of scriptures or not seen as core values? For instance, corruption is everywhere, having glued itself to our daily lives. Do something about this!

With due respect, honourable MP, your representation is substandard. The Quran or the revered teachings of the Prophet are not well executed, articulated or evident in your actions.

Please don’t misinform or mislead Malaysians. It is a defilement on your part of the faith of billions of faithful adherents.

Also worrying are the pseudo-academics who weighed in with patently false narratives to support the MP who went to the mall. They drag out anything and everything false they can employ to show their sense of ‘justice’.

This destroys their credibility and places doubt over the authenticity of their cause. It is disappointing to be subjected to this. At least debate, discuss and discern this issue with honesty. That would earn respect, dignity and honour.

When the adherents of a faith impose, dictate, inconvenience, disrespect, insult, judge, condemn even in the smallest of ways or deprive an insignificant minority, that faith is not secure enough. Genuine faith does not mean that others – no matter how insignificant – do not matter.

We should not be hesitant about responding. The question arises: did religion contaminate politics or was it vice versa?

The late Pas spiritual adviser Nik Aziz Nik Mat was a pre-eminent and prime example that religion can have a positive effect on politics. If you have persons of calibre and character, the moral compass in their conscience will navigate past the treacherous waters of controversial concerns and issues.

Nik Aziz was a Muslim politician who could reach out across the political, social, religious and racial divide, despite his human weakness. Pas and their politicians have lost this and are on a toxic trajectory.

Is there hope? I am certain true Muslims will rise up and counter those individuals who are simply unworthy of the mantle of being Muslim. Enough of these twisting, turning characters who claim the faith despite their lack of honour or dignity.

My father once told me that religion and politics don’t mix. PAS should stop using religion for their own political agenda. It’s just another form of dictatorship.

As usual, PAS members will use any excuse to show how religious they are. They use the most easy targets like pork and alcohol sales and women’s dress codes to exert their political influence but ignore important issues like corruption and poverty which need commitment and hard work to address.

A very good comment indeed.
Alright, how many people drink alcohol in Malaysia ya?
I guess many will be hit by a drunk driver and liver cirrhosis due to this alcohol addiction.
Syabas Malaysia.

It seems this PAS MP is still clueless about his role. He should be promoting racial understanding but he’s creating tension instead! Always talk about Muslim sensitivity but how come they never care about others’ sensitivities? If he’s such a morally strict person, please go through all his PAS members’ handphones I bet many have access history …!