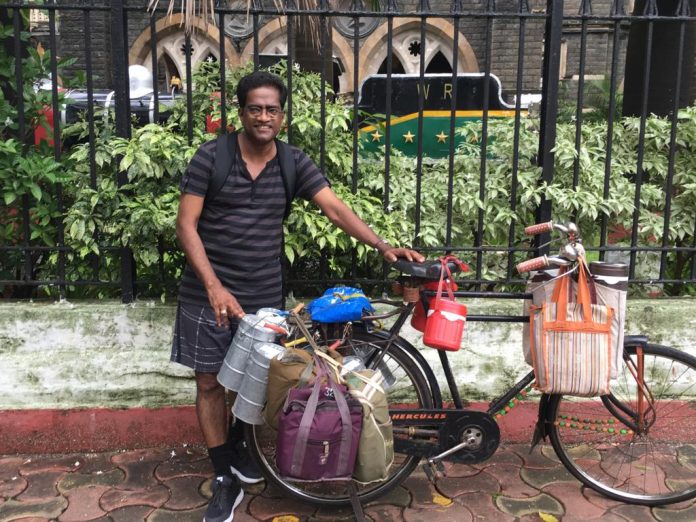 Benedict Lopez spotlights the workers who deliver lunchboxes to customers across the city with clockwork precision.

Mumbai (formerly Bombay) is a city of striking contrasts.

India’s largest city and its financial capital, Mumbai is well known as the gateway to India ever since its famous landmark arch was built by the British Raj in 1924. The city is also globally recognised as the hub of the Indian film industry, Bollywood – India’s answer to Hollywood.

Mumbai also has its seamy side. Its less fortunate residents live in ramshackle homes in shanty towns next to the opulent lifestyles of the rich and famous.

Not as well known is the high competence of the city’s lunchbox carriers. Popularly known as dabbawalas, they are noted for their clockwork precision and efficiency. Dabbawala literally means one who carries a box.

The idea for dabbawalas was conceived back in 1890. A Parsi banker, Mahadeo Havaji Bacche, wanted to satisfy his insatiable appetite for home-cooked food while at work. So he began a lunch delivery service with an unorganised group of a hundred workers.

Upon reaching their destination, other local dabbawalas receive the tiffin carriers and meticulously distribute them in time for lunch. The previously day’s lunch boxes are returned to the dabbawalas.

For identification purposes, the dabbawalas use a unique coding system. Each lunchboxes is marked using a different sign and colour to indicate the collection point, the station to which it should be sent and the recipient’s address. All the work is hand-painted.

By any standards, the dabbawalas charge only a small sum for their services: 800 rupees (RM50) per month for each patron. What a bargain for such a tremendous effort. The dabbawalas earn a monthly salary of only around 10,000 rupees (RM600).

The dabbawalas have an amazing sense of service, punctuality and professionalism, says Jyotsna Nair, a long-time Mumbai resident.

“Most of the dabbawalas, who hail from around Pune, take only about seven to 10 days annual leave every year, during the annual festival at Pandharpur. During this period the entire dabba system comes to a standstill.”

Some might ask, with dabbawalas working at such speed and precision, how often do they make mistakes?

According to the Mumbai Tiffinmen’s Association, mistakes are made only once in every six million deliveries. That’s about one tiffin carrier mislaid every month. This translates to a 99.99% success rate – without doubt, an outstanding record by any measure.

Jaya Kumar Muniandy, who works at the Kuala Lumpur office of a multinational corporation, spent some time during a holiday in Mumbai observing the dabbawalas at work. “Their speed and accuracy of operation will put modern day management to shame,” he marvels.

Many economists around the world have recognised the dabbawalas for their adeptness, organisational skills and technique of simplicity.

Even in this hitech era, the dabbawalas work without modern-day gadgets, intricate management skills, computers and mobile phones. But they soldier on without complaint while carrying out their daily tasks diligently.

People from different walks of life have met these ingenuous dabbawalas in Mumbai and are spellbound by their modus operandi.

Prominent personalities and even executives from internationally renowned logistics firms have dropped by to meet these beacons of the service industry. The dabbawalas are also the subject of case studies in several prominent universities around the world.

Exceptional service providers have the knack of meeting customers’ expectations despite unexpected challenges. They have to overcome bad weather, strikes, riots and transport disruptions.

Mumbai’s dabbawalas have had to face all these challenges. In this respect, the dabbawalas are phenomenal by any standards.

Few can argue that the dabbawalas of Mumbai are the city’s everyday heroes. It is incredible for the profession to have survived so long without embracing innovation and technology.

May the dabbawalas superb service continue to stand the test of time, and may they weather all storms ahead. They can take pride in their work ethic, which is worthy of emulation all over the world.

Are there lessons to be learnt by Malaysian food service providers? Sure, there are. They should visit Mumbai and study the operations of these dabbawalas, who are sticklers for meticulousness, time management and coding.

Malaysian food service providers should then look into implementing a similar system here – perhaps with some slight modifications such as using motorcycles to overcome the traffic jams.