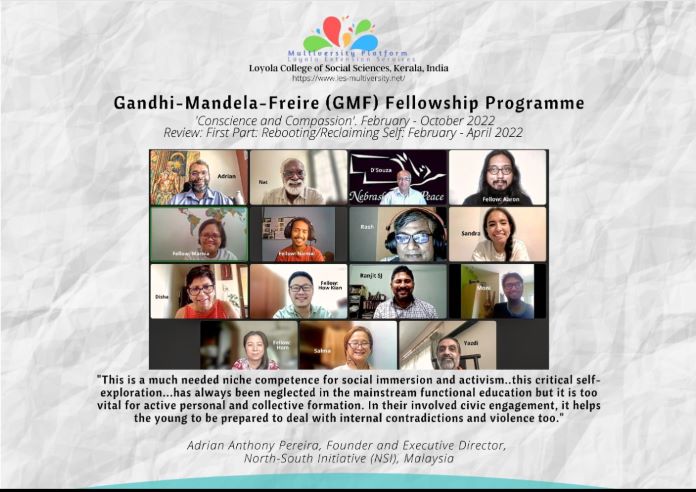 A small group of young people who are on a life-changing journey to act in conscience and compassion recently gave a short public preview of the power of their learning approach.

The six participants – from the Philippines, Malaysia, Myanmar/Sri Lanka and Nepal – of the inaugural nine-month Gandhi-Mandela-Freire fellowship programme came on record in an online sharing session on 30 April to reflect on the conscientisation process.

The process delves into their personal struggles and awakening as a preparation for initiating and achieving self and social transformation, which is the primary aim of the programme.

By their own accounts, that introspective-contemplative process, dubbed “Rebooting Self – Touching on Hacking, Rebooting, Reclaiming Self”, which has taken up the first three months (February to April) of the fellowship, has been both deeply uncomfortable but also enlightening.

“At the end of the three months, I started to feel that I’m vulnerable, but at the same time, I’m resilient,” said Hom, who is from Myanmar and now resides in Sri Lanka.

The innovative fellowship, launched on 15 January, is an effort to nurture a borderless community – the GMF Fellowship – of young people who will further consolidate mindful work going on around the world. Hopefully, this will be able to change the current destructive course of society towards one that is wholesome, fulfilling and deeply compassionate.

Broadly speaking, in the language of the programme’s developers, the aim is to create an environment that fosters ecological and social justice in pursuit of the common good.

Commenting on the sharing session, Adrian Pereira, founder and executive director of North-South Initiative, Malaysia, a human rights group associated with migrants and refugees, said: “This is a much-needed niche competence for social immersion and activism.… this critical self-exploration … has always been neglected in mainstream functional education even though it is vital for active personal and collective formation.

“In their involved civic engagement, it helps the young to be prepared to deal with internal contradictions and violence too.”

During the fellowship, participants are exposed to a range of practical skills (“root skilling”) such as reflection-meditation-contemplation, silence, ‘zentangling’, forest bathing, living question bank building, frames mapping, diary-keeping, blogging, curating, sustainable-regenerative design thinking, documenting and researching, the development of counter-narratives and the evolving of a ‘new language’ for storytelling.

Initiated by the Indian Social Institute in New Delhi and the Loyola Institute of Peace and International Relations in Kochi, the GMF fellowship is today based at the Multiversity Platform of Loyola Extension Services at the Loyola College of Social Sciences in Thiruvananthapuram, southern India.

The effort – developed and nurtured by Dr M Nadarajah – is supported by a moral community of 18 institutions from across the world, though largely-based in Asia.

READ MORE:  When all hell breaks loose at the mosque

The learning journey of the fellowship is conceived in three phases:

The programme is now moving to its second phase (from May to October).

Later, the fellows will develop and execute a project on public compassion and for the public good. In their initial deliberation on the project, they have come up with a “100-day Journey of Compassion”.

Starting in October, the project with engage the public in the journey of compassionate practice till December 2022.

This will also be a post-fellowship effort of the group. The effort will be continued subsequently by the GMF community, the Multiversity Platform, Loyola Extension Services, Loyola College of Social Sciences, under the guidance of Ranjit George SJ (director) and Nadarajah.

Importantly, the continuation of the project will be the responsibility of the present core GMF fellows — Hom (Myanmar-Sri Lanka), Marnie (Philippines), How Kian (Malaysia), Nirmal (Nepal), Rae (Philippines) and Aaron (Malaysia).

Those interested can visit their websites here and here.

Are Malaysia’s leaders out of touch with the masses?