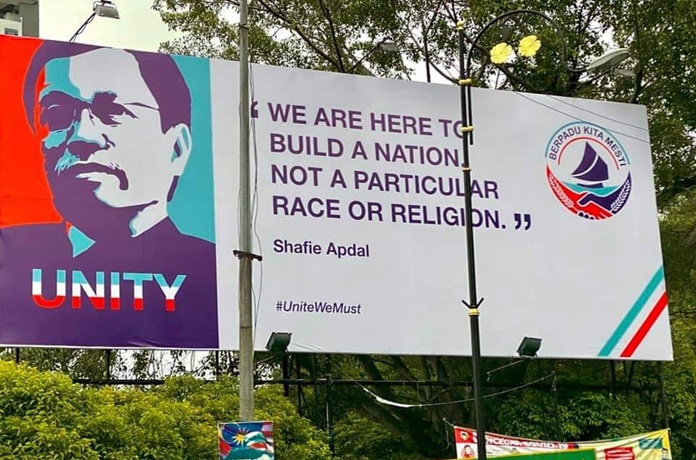 There could yet be an unexpected twist to the election outcome. Anil Netto writes.

Gabungan Rakyat Sabah, with 38 seats, may look like it has won the Sabah state election over Warisan Plus, which had 32 seats. But there could yet be an unexpected twist.

The problem is GSR is not a registered party: it is a loose pact comprising Barisan Nasional, Perikatan Nasional and PBS – and hardly a cohesive one at that, looking at how they competed against each other in a string of seats. BN and PN could not even agree on a candidate for chief minister ahead of the election.

Will Shafie be called to form the government?

What is in the Sabah state constitution is crucial: the leader of the party with the majority of the elected seats will be called upon to form the government. We are talking about parties standing under registered logos. Warisan has 29 seats (DAP stood under the Warisan logo) to PN’s 17 and BN’s 14. So a lot will depend on what the definition of majority of the seats means.

In the 2018 general election, PKR was called to form the federal government even though Pakatan Harapan was not a registered coalition. But the PH parties had contested under the PKR logo, making it the party with the most seats. Dr Wan Azizah Wan Ismail was correctly called to form the government, but in keeping with a pre-election pact, she gave way to Dr Mahathir Mohamad, who lest we forget also stood in the election under the PKR logo. (How differently things could have turned out if Azizah had gone on to become PM then).

In Sabah this time, PBS’ seven seats, Sabah Star’s six seats and the two independents (a third has just thrown his support behind PN) could prove crucial in deciding who has the confidence of the majority, so expect some serious back-room horse trading.

Much will also depend on the relationship between Umno and Bersatu – will they be able to set aside their differences and work together?

Umno president Zahid Hamidi’s recently said he would not stand in the way of Umno MPs who want to defect to Anwar Ibrahim’s side as the latter bids to take over the federal government from Bersatu president and current PM Muhyiddin Yassin. This could have further soured Umno-Bersatu ties.

Even before this, observer detected Umno’s bid to assert itself as the ‘big brother’ to the upstart Malay party Bersatu within the ruling PN. That the Umno-led BN and the Bersatu-led PN failed to close ranks ahead of the Sabah election was a sign of the impasse to come.

So who had the upper hand in the Sabah election result? PN’s Bersatu clinched just 11 seats compared to BN Umno’s 14 seats.

PN’s better performance could be due to the Muhyiddin Yassin factor, especially his announcement of handouts for the middle class and lower-income group in the week leading to polling day. (How ethical was that?)

The redrawing of constituency boundaries to create an additional 13 seats in Sabah (73 now compared to 60 in the last election) probably helped PN and BN’s cause. Bersih had called the redrawing “malicious, flawed and obsolete“, pointing out that, for instance, the largest state seat, Sri Tanjong, has 25,104 voters – four times the number in Banggi. But the PH government under then-Prime Minister Dr Mahathir Mohamad, also then-president of Bersatu, agreed with it. And Shafie went along with it. But now, Bersatu is on the other side.

These 13 new seats were first proposed under the Najib adminstration but finally approved in 2019 under the PH administration. Look at the difference in the size of the seats.

This is why we really need to relook at the way constituency boundaries are drawn across the nation. We can never have a fair election if they are drawn to suit the interests of certain parties.

That said, Warisan’s 43.8% share of the popular vote this time was short of the PH share of 45.9% (excluding Upko) in the 2018 state election – despite having Upko within its ranks this time.

For Warisan Plus, Upko was the weak link winning just one of the 12 seats it contested, compared to its tally of five in 2018. After the last election in 2018, the party had switched sides to the Warisan-led PH government.

What is encouraging is that multi-ethnic parties in Sabah continue to have about two thirds of the seats in Sabah compared to the race-based parties (Umno and Bersatu), though this time the latter has gained a little ground with 34.2% of the seats won compared to 31.2% in 2018.

So it will be fitting and positive if the multi-ethnic parties in Sabah come together to rule over the narrow race-based parties which have divided Malaysian society.

So it’s not over yet. Let’s live in hope. For us in Aliran, we will continue to work for a more inclusive politics, a Malaysia for all.