Home TA Online 2015 TA Online In the land of the blind, ignorance is bliss 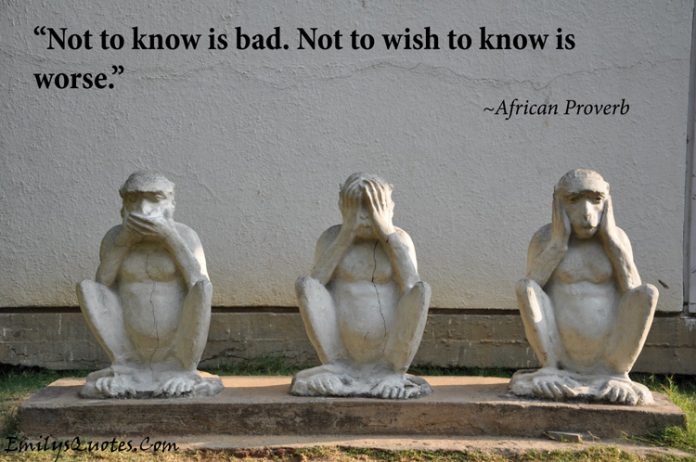 Those who do not admit their ignorance are in compound ignorance; they swallow hook, line and sinker any crap thrown in their direction, laments Abdul Rashid Hanafi.

Once a liar is proven it is a lie by his own admission, all his or her claims of grandiosity become null. It is simple logic, and we are surprised that some people bring such a fallacy up when they know, or should know, it is a fallacy.

Truth is discernible only when we put on our thinking cap. To find the truth in science we do not simply follow the scientist blindly. We find the answer and the truth through research, investigation, observations, analyses and tests. Sometimes, we make mistakes but if we stick to this foolproof methodology, we may eventually find the right answer—the truth.

Likewise, to expand our understanding of any assumption we discuss and question it. We challenge what we know or are told, and that is how we learn more.

Assumptions when properly tested by many empirical observations are certainly closer to the truth—compared to statements made by irresponsible leaders which claim to be “truth clear from errors”; yet, they refuse to subject these claims to testing and criticism.

God has given to everyone a brain and a faculty to think. Unfortunately, some humans refuse to use them to see the truth. They prefer the easy way out by simply being gullible. They don’t attempt to compare with sound and rational judgement, thus giving in to a seducing spirit while their soul itself is sold to perdition. The truth is oppressed and trodden down while lies and falsehood are embraced with no conscience or guilt.

It does not matter whether or not their belief is true; if they are gullible and blinded by unquestioned faith they can become intolerant.

They are prone to despise people who have views contrary to theirs. And if that’s not enough, they will scorn you, vilify you, pity you, label you an ingrate and hurl expletives, exhorting you to remove yourself from society.

The ignorance prevalent in our society is not only a product of ruler-ship but also of follower-ship. It is said that the people get the type of government they deserve at any particular time.

It is true that, for selfish reasons, rulers have used political/religious dogmas to suppress the populace and deny them space for personal expression. Hitler did it, Stalin did it, Mao did it. Even cult leaders David Koresh, Jim Jones, Shoko Ashara, Sun Myung Moon and many others did it.

As Goebbels infamously proclaimed: “If you tell a lie big enough and keep repeating it, people will eventually come to believe it”. The lie can be maintained only for such time as the ruler-ship can shield the people from the political, economic and/or military consequences of the lies.

If you are right the world can see it. If you are not, you can change your views. Isn’t this a logical thing to do? Or perhaps your attachment to your ego is much stronger than your commitment to the truth, and you fear others may find some flaws in your reasoning and embarrass you?

But we have to accept the fact that we are all born ignorant. Whatever we know, we have learned from others. There is no shame in not knowing. Shame is in not wanting to learn to know the truth.

There is a difference between lying, that is, knowingly giving false testimony, and believing in something that is not true. It is difficult to wake up people who do not want to wake up.

Those who are capable of rational thought can quite easily find the truth by questioning and reasoning. In fact, you will learn more from those who disagree with you because they force you to rethink.

Acknowledging one’s ignorance is the beginning of wisdom. The more you know, the more you realise how little you know. Those who do not admit their ignorance are in compound ignorance. They would swallow hook, line and sinker any crap thrown in their direction.

The day will come when truth will triumph; if we continue the good works of truth without fear, truth will eventually prevail.