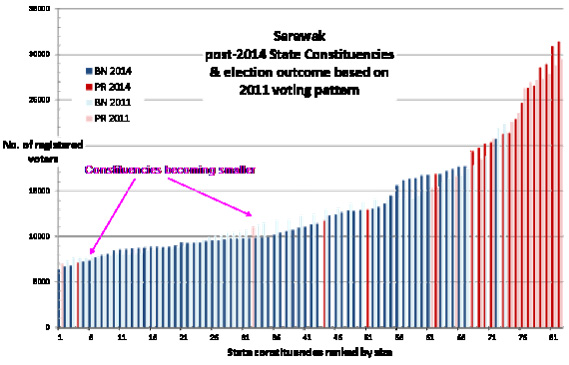 The outcome of the general elections in Sarawak or in Malaysia depends not just on the voting public but on the Election Commission as well, says Ng Chak Ngoon.

It would be safe to say that the next general elections will be won by the Barisan Nasional again. It would even be safe to predict that despite any continued swing of votes towards Pakatan Rakyat, the BN will regain enough seats in Parliament for a majority exceeding two-thirds as was its tradition.

The Election Commission’s recent proposal on constituency redelineation for Sarawak shows why the outcome is so predictable. Anyone having a stake in Malaysian politics, and this means every Malaysian especially opposition politicians, should take note of this.

But this slide will now stop, not because BN has reversed its slide in popularity, but because the Election Commission can determine the overall outcome of any upcoming general election through constituency delineation.

In 2013, the BN’s votes and seats continued to decline only because the Election Commission had limited leeway in changing electoral boundaries, mostly in the form of “boundary corrections” which amounted to shifting limited numbers of voters between adjacent constituencies.

Now, in the guise of constituency redelineation, the Commission can totally overhaul electoral constituencies wherever necessary to reverse the BN’s declining electoral fortunes, even if its voter support continues to decline. In BN-controlled states it can even further subdivide BN strongholds into smaller and therefore more numerous constituencies to shore up the BN’s hold of these states. Most if not all state constitutions require only simple majorities in the state assemblies for changes in the numbers of state constituencies.

An increase in parliamentary constituencies is unlikely now that the BN has lost its two thirds majority and the PR’s agreement is required. But given the present strained relations within PR it is entirely conceivable that some opposition MPs will cross the floor in the hope that their party will benefit from a constituency increase or they themselves will be individually rewarded. Not only will this be treachery to the voters who voted for them, any promised gains for the defecting political party will be illusory because the Election Commission, in its history, has never been about being fair.

In the case of Sarawak, the Election Commission’s strategy for the BN’s future electoral victory is clearly shown in its proposed constituency revision for the state. In 2011, there were 979,796 voters in the state. The latest figure available is 1,109,134, an increase of 13 per cent.

In this chart, constituency sizes in terms of registered voters are plotted. Constituencies won by the BN in 2011 are plotted in light blue and those won by the opposition (mostly the PR) in light red.

New constituencies as defined by the Election Commission in its latest (2014) proposal are plotted as columns of solid blue or red.

READ MORE:  Redrawing constituency boundaries: Your duty as an objector

From our analysis, we expect the BN to increase its number of seats in the next general elections from the present 55 to 64 while the opposition may be able pick two more to reach 18 (22 per cent of the seats) even if it may get 35 per cent of the total votes.

So the outcome of the general elections in Sarawak or in Malaysia is not just decided by the voting public but by the Election Commission as well. The overall outcome therefore is already predetermined even before the first vote is cast.

Going to vote under such a system merely lends credibility to a grossly unfair system designed by the Election Commission for BN to the win. The only option open to Malaysians hoping for a change of government and a better future for our next generation is to protest against and object to such a charade.

Najib has promised to make Malaysia the best democracy in the world. He will only succeed if he means it to be in the likes of other similarly “democratic” countries such the Democratic People’s Republic of North Korea or the Democratic Republic of the Congo.

Ng Chak Ngoon is a retiree who is a keen monitor of the role of the Election Commission, especially its duty to promote the interests of Malaysians and to protect their constitutional and electoral rights.