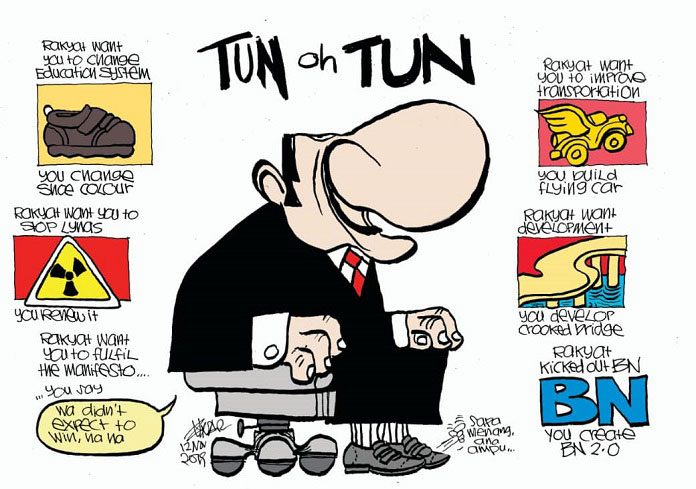 JD Lovrenciear sums up what the prime minister and Pakatan Harapan have to learn from this by-election loss.

PH’s overwhelming defeat in the Tanjung Piai by-election sends a message that is too loud for Dr Mahathir Mohamad’s government to dismiss.

PH leaders must stop moaning in the face of this humiliation. Neither must they downplay the thundering message sent to them.

Despite knowing all about the 1MDB debacle, the people were prepared to give Najib a thumping victory.

Despite giving PH a chance to undo the sins of the previous regime, they have punished that same PH severely. Even Mahathir’s presence did not resurrect PH’s lost hope.

Stop all the patchwork excuses and coming up with more promises. It has got to be now or never and this must slice quickly through the thickening walls of the PH’s power barricades.

First, fulfil your 2018 general election manifesto promises in quick succession. You have already lost over a year.

Second, even if you have done something, people are not seeing it. People are not feeling it. And that sums up PH’s emphatic defeat in Tg Piai. Your communications strategy and capability is totally flawed.

Third, stop using the 1MDB as a smokescreen by harping on the debts.

Fourth, stop the racism with firmness. Talk ‘Malaysian’; don’t rehash the Malay Dilemma. And plug the religious extremism in our midst like what Indonesia is doing. You cannot keep playing this game.

Fifth, get the economy back into shape so that the business communities get to see people able to spend with ease.

Sixth, all your energies seem to be geared towards opaque restructuring of government-linked companies and government-linked investment companies. Be more transparent and accountable to the rakyat who are the ultimate stakeholders.

Seventh, halt your warring stances with countries around the world. Focus on the ground realities affecting citizens.

Eighth, your war on corruption needs more than the Malaysian Anti-Corruption Commission, police action and courtroom dramas. Unless and until you show proof that you are colour and power-blind in this war, nobody is going to forgive you when the next general election comes.

Ninth, people are getting tired of the Mahathir miracle. They want a people’s leader and that has to be Anwar Ibrahim. Anything else will shatter PH into hope-less, fragmented parties leaving BN on the cusp of returning to power.

Finally, acknowledge you are running out of time with your various ministries fighting unwanted fires like the blanket smoking ban on eateries and the policy to change school shoes.