Home TA Online The day after: Only Mahathir could have pulled it off 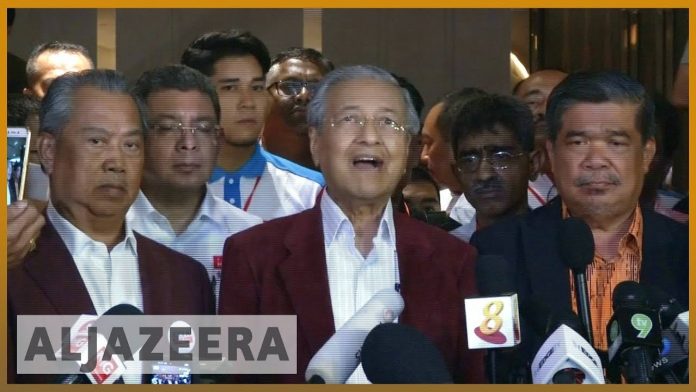 It was the tense 24 hours after polling that revealed Mahathir’s real mettle as he needed all his 22 years of experience to stare down the state power apparatus, writes Anil Netto.

Much has been written about how Dr Mahathir Mohamad played a key role in generating a People Power tsunami that ultimately swept away the corrupt Najib-led BN regime.

In the weeks till polling day on 9 May, the choice of Mahathir to spearhead the push for change proved to be an inspired one as he made sharp inroads into the Malay heartland.

But it was the tense 24 hours after polling that required all his mettle in the struggle: he needed all his 22 years of experience to stare down the state power apparatus.

It was this period that caught the attention of the world as wide-eyed Malaysians, with barely a few hours sleep, hung on to the drama unfolding on their screens. All eyes were on Mahathir. Could he pull off the unbelievable and secure regime change after six decades of Umno rule? The coming hours would be crucial in securing and nailing down the win for PH, which the Rakyat had handed to the coalition the day before.

So what did Mahathir do? He declared victory before the stroke of midnight on polling day when it became apparent to many that the results had slowed to a trickle. It was high-stakes poker but Mahathir’s timing was impeccable and added tremendous pressure on the Electoral Commission to announce the remaining results in the hours that followed.

Najib had not yet conceded defeat and was no doubt trying to cling on to power by all means in the hours that followed – only making an ambiguous address at 11am when it was obvious to everyone else that all hope of BN succeeding in parliamentary horse-trading had ended.

Meanwhile, the opposition coalition had wandered into uncharted territory – and Mahathir had to face off a formidable array of instruments and forces of state: the Electoral Commission and other key agencies, a robust bureaucracy led by Najib loyalists, the powerful military and police, and the royalty. This required every ounce of the 93-year-old’s experience and wile and guile to navigate past. Then, the first breakthrough at the crack of dawn: the chief secretary to the government announced the two-day holiday that PH had promised during the campaign.

Mahathir also had to deal with what some felt would be Malay insecurities over regime change, especially as Umno, which had long positioned itself as the ‘protector’ of the community, had fallen with an almighty thud. Some had privately wondered earlier whether regime change could ever take place peacefully given Najib’s past remarks about ‘defending Putrajaya’ to the end by all means, in a nation still haunted by the Ghost of May 13.

But Mahathir had a trump card: the knowledge that the Rakyat was solidly behind him in large numbers. No doubt, the key players of state knew this as well and realised that sooner or later he was going to become prime minister and then they were going to have to deal with him individually – a prospect they were not going to relish had they not played ball fairly during this critical period.

When the swearing-in ceremony was delayed and postponed, dragging on interminably from late afternoon to nightfall, Malaysians waited nervously. Mahathir did not blink, though he must have been fatigued by sunset: his spirits would have been lifted by the incredible scenes of surging public support on the way to the Istana and just outside the palace gates. Yes, let’s not forget the huge role played by the Malaysian people in seeing this through. More on this soon.

In the end, he was sworn in by day’s end as applause and celebrations broke out across the nation. Strangers chatted animatedly with one another as they welcomed a new Malaysia, having just witnessed history.

Even so, Mahathir and the rest of PH were confronted with hung assemblies in a few states – but that could wait another day or two. The main job had been done: the Najib regime had been consigned to history and the ghost of May 13 banished. Incredibly, it had been a peaceful transition, and the nation heaved a huge sigh of relief.