Home TA Online Where are all the cars? Comparing Singapore with Malaysia 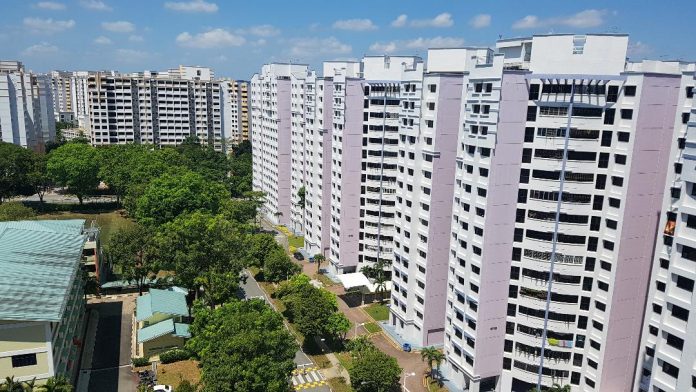 Some time ago, representatives of an established foreign university with linkages to Malaysia travelled to a few places around the country to guage what kind of a demand there would be for an urban planning course, which they thought could be introduced here. I heard they dropped the idea as there didn’t seem to be much of a clamour for such a planning course.

I was in Singapore over the weekend and one of the things that caught my eye was the urban planning in the island republic, which incidentally has a smaller land mass than Penang state.

Despite its population being over three times larger than Penang (5.6 million vs 1.7 million), Singapore does not appear as congested.

Take a look at this photo (above) of a typical public housing area packed with high-rise Housing Development Board apartment blocks. Unlike in Penang, it is quite rare to find residential tower blocks over 40 or 50 storeys in Singapore, except perhaps in the latest projects. And they are well maintained, equivalent to mid-range private condos in Malaysia.

Yes, it looks dense, but at ground level in Singapore, you don’t feel it. Instead, the visual impact is quite pleasing – lots of green spaces and shady trees between tower blocks. (This is unlike what you would find in KL and Penang, where much of the flat space is paved over or concretised or eaten up by parking bays.)

Take another look at the photo above, which speaks volumes. Look at the streets. Where are the cars? No cars parked along the road or outside the apartment blocks? Singaporeans are served by an excellent bus network, which is integrated and supplemented by a rail network. So 67% of commuters use public transport during peak hours – and the target is to increase this to 75%. (In contrast, only 4% of people in Penang use public transport – and the state wants to spend billions of ringgit more on highways.) No wonder Singapore has just 147 cars per thousand people compared with Malaysia’s 433 (2015).

Those cars in Singapore are tucked away discreetly in small multi-storey car parks next to the apartment blocks. Because public transport in Singapore is so good (except its MRT system has encountered some teething problems), many don’t feel the need to own a car. Private cars are expensive anyway mainly due to expensive ownership permits and congestion charges. What about visitors driving to these HDB apartments? They park in allotted spaces in the same multi-storey car parks as residents (though they have to pay about S$1.20 per hour).

And security guards and guardhouses and fencing? I didn’t see any in the area I was in. Instead there are only auto-barriers for vehicles at the entrance to the access roads leading to these highrise blocks. Taxis and visiting cars can easily drive through with a touch card. Most residents don’t seem too worried about security concerns or break-ins.

The roads are not particularly wide. But fewer cars on the road means they have more space for pedestrian walkways. These walkways are shielded from the sun by lots of trees (none of them badly butchered in the name of ‘pruning’) or the walkways could be covered, which makes it a lot more comfortable to walk from the apartments to the bus stops.

Imagine if this had been in Penang or KL. New 40-storey blocks would be sprouting all over the place, even in established low-rise neighbourhoods. Because public transport is so poor here, many households would have more than one car.

And these residents’ cars would be parked all over, spilling out beyond the front gate, along the streets. At many apartment blocks, the space allotted for visitors’ cars is limited, and these vehicles are then parked outside along the streets.

So this is what we get in Malaysia:

Cars parked all over the congested streets are a blight on the visual streetscape and occupy space that could otherwise have been used for shady trees, pedestrian walkways, cycle lanes and green spaces.

Unlike in Singapore, it is stressful walking along the pavements in Malaysian cities, where you usually come across lots of obstacles and uneven paths, forcing you to walk on the road. These obstacles deter some from using the bus more frequently.

Look, I am no urban planner. But common sense tells me there are lots of lessons to be learned from Singapore or any other city that follows progressive urban planning principles and a proper plan.

But here we are, merrily approving residential skyscrapers all over the place (even though the total fertility rate has fallen below population replacement level) without giving much thought to the adequacy of supporting infrastructure. Here we are, planning for a third national car and more multi-billion ringgit highways instead of weaning folks away from their cars and making our streets more pedestrian-friendly.

Sometimes proper planning is thrown out of the window altogether when vested interests get into the act. For instance, at one local council workshop to discuss a long overdue draft local plan, representatives from a property developer were present and actually trying to influence the zoning of a site which civil society groups wanted to preserve.

All said, we badly need more progressive urban planning, that’s for sure. For that to happen, we first need more urban planners (qualified from recognised universities, that is!) in local, state and federal governments. And then we need to curb those vested interests.

Our voluntary writers work hard to keep these articles free for all to read. But we do need funds to support our struggle for Justice, Freedom and Solidarity. To maintain our editorial independence, we do not carry any advertisements; nor do we accept funding from dubious sources. If everyone reading this was to make a donation, our fundraising target for the year would be achieved within a week. So please consider making a donation to Persatuan Aliran Kesedaran Negara, CIMB Bank account number 8004240948.
Subscribe
9 Comments
Newest
Oldest Most Voted
Inline Feedbacks
View all comments

ABOUT US
Aliran is a reform movement in Malaysia promoting justice, freedom and solidarity.
Contact us: [email protected]
FOLLOW US
Content may be reproduced without alteration but please attribute to aliran.com
wpDiscuz
9
0
Would love your thoughts, please comment.x
()
x
| Reply