Home TA Online You want us to ‘percaya’ after all the wrongs BN has condoned? 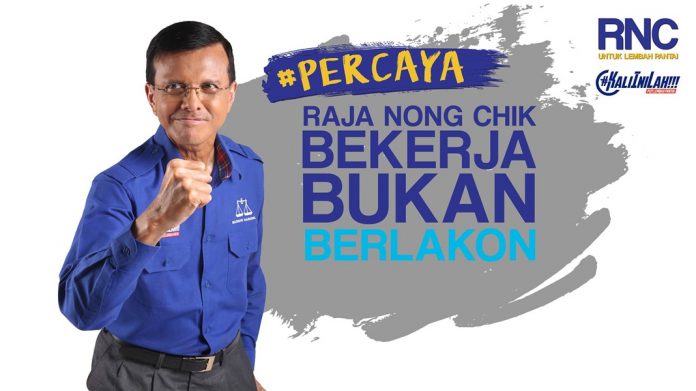 How do you trust a party that entices voters to cast their ballots in its favour by giving them money, petrol, food necessities and other incentives, asks K Haridas.

I was driving by the parliamentary constituency of Lembah Pantai and noticed the billboards put up by candidates representing Barisan Nasional (BN), Pakatan Harapan (PH) and Party Islam SeMalaysia (Pas).

While the latter two invited the public to vote for them, the BN candidate Raja Nong Chik says “RNC – #Percaya”. This candidate wants us to believe or trust him.

Can we really? He is stained by his party leadership and by the serious trust deficit facing BN and the government as a whole.

If the party has performed, then it can highlight its achievements. The extent of its dishonesty is revealed when it has to resort to ethnicity as a basis for the redrawing of constituency boundaries.

We can never believe what the BN government – with its huge trust deficit – publishes and claims. It might even use the Official Secrets Act to hide facts or slant findings in its favour. We have seen this in the case of the parliamentary accounts committee and the auditor’s report on 1MDB.

I will never trust someone who cheats me, and the same principle applies when evaluating a party and its nominees for parliamentary seats. By their very conduct and approach, they reveal their motives. What is saddening is their mindset: they think they can exploit poor Malaysians and manipulate them by giving them money or handouts. Is this ‘halal’ under any circumstances?

Yes, it is true that voters at the base of the pyramid, those who have issues relating to poverty, would take all that is given to them. But to get some of them to sign an undertaking that they would only vote BN and they could receive more after the general election is the height of using inducements as a mechanism to gain votes. Malaysian Anti-Corruption Commission and Electoral Commission, are you sleeping?

BN leaders are like chameleons who when in power will talk about integrity plans and anti-corruption agendas, flout their Islamic credentials and reflect their self-righteous halal discourses.

Time off for BN

A spell in opposition ranks will do BN politicians much good after several decades in power. They would get a new perspective by being in the Opposition; such a stint would give them time for reflection and change.

This is the best gift we can give BN now. The Liberal Democratic Party in Japan faced a similar challenge when it was dislodged from power mainly due to issues of corruption – only to return much later having learnt some key lessons. BN needs some time off, a regrouping and some introspection to come up with a new and inclusive mission.

Additionally, an internal audit should be undertaken on institutions like Kuala Lumpur City Hall. Ministers and civil servants should be probed to see if any of them have indulged in speculative land deals and improper conduct.

This will set standards of accountability for incoming politicians. BN must put race politics to the trash bin and articulate more accountable and inclusive policies if they are to have any future.

Trust is not something to be preached about. It is defined by the values that provide us with the internal discipline that instructs our life. It is in practising these values that trust is transmitted and integrity exemplified. Trust is at the heart of leadership and is the essence of all relationships.

Then we have Pas leaders, the self-appointed champions of Islam, who introduced RU355. These guys are more interested in reforming others than taking a long hard look at themselves! To them, the rest of us are ‘kafirs’ while they fancy themselves as self-appointed sanctimonious representatives.

They are now in cahoots with BN from whom they are alleged to have secured funding. They hope to be part of a BN government should BN be returned to power. God help Malaysia should this happen.

By being the third party on the ballot paper, Pas leaders hope the party will play the spoiler’s role and hand the advantage to BN. These are the people who advocate an administration over which Malay-Muslims would be the policy-making leaders.

Power has that intrinsic capacity to corrupt. That is why checks and balances are so critical in a democratic society. Institutions and regulatory bodies, the separation of powers, an independent judiciary and free media are all needed to assist politicians and clearly indicate to them that they will be called to account if they step out of line.

Increasingly, over the last few decades, we have forsaken all our key institutions and developed a powerful executive, which has become both autocratic and now also kleptocratic. Politicians undermine themselves and mortgage their credibility when they ride roughshod over these important institutions.

This is a global phenomenon, and in today’s materialistic environment, greed takes over and the leader loses sight of the needs of the people they represent. They then rationalise and take from the coffers what is not theirs in the first place.

Lula from Brazil is now in jail awaiting his hearing. The former president of Korea has been sentenced to 20 years’ imprisonment. We will wait to see the fate of the recently deposed prime minister of South Africa who is also facing corruption charges.

Leaders who manipulate identity issues under the theme ‘Make America Great’ are short on goals that unify people but long on divisive politics.

The time has come for us to move away from raw ethnic and racial politics. We have to respond to the challenges facing all Malaysians. If we are right by all Malaysians, then we should have faith that we will be equally right by all our minorities and the needs of our people as a whole.

We have given Sabah and Sarawak a raw deal for far too long, and it is time that we recognise their rights under the Malaysia Agreement.

To achieve these goals, a basic requirement is to have politicians who can be trusted. Najib and his cronies are definitely not among those who have earned the people’s trust.

As we move around during the ceramahs, we can see how much Najib has tainted BN as a whole. Those around him are like ants looking for sugar, and the sugar daddy is handing things out to them. Most if not all the component parties are dependent on him for funding and support.

I do not say that opposition politicians are great. But both Penang and Selangor have a budget surplus that puts BN to shame. The Pas government in Kelantan had to resort to funding from the centre even to pay the salaries of its civil servants. Obviously, Pas leaders did not pray hard enough!

We have to be realistic if the incoming government is an opposition group. It should be required to establish the Malaysian Anti-Corruption Commission and the Electoral Commission as independent institutions.

Likewise, amendments have to be made to ensure that we respect the doctrine of separation of powers under our Constitution. We will equally need to address serious issues within our judiciary.

Should there be a new government, freedom of the media should be guaranteed by abolishing the Printing Presses and Publications Act and the Official Secrets Act and enhancing the role of whistleblowers. These are steps that would help ensure that politicians who hold power for the first time behave themselves.

While the present BN government brags about its achievements, we must also realise that much has been lost through corruption, mismanagement and cronyism within government-linked companies, and over-staffing. This lack of efficiency and accountability is evident when compared with the surpluses that both Penang and Selangor have achieved. All the states ruled by BN fail miserably in comparison.

We could have done so much better. Despite everything, we still have a growth rate of 4.5% – and that is testament to the blessings that this land and its people have received. But we could have been hitting 8% growth rates and above but for all these leakages. This was a loss opportunity.

Let us vote for a new dawn. Our vote can provide the tipping point. Let us all make a difference by voting for change. Good riddance to bad rubbish is the call of the hour.

This is not a promise that we shall enter heaven; rather, we have another chance to change things for the better for ourselves, for our children and for this nation that we love. “Percaya” that an alternative future is possible.