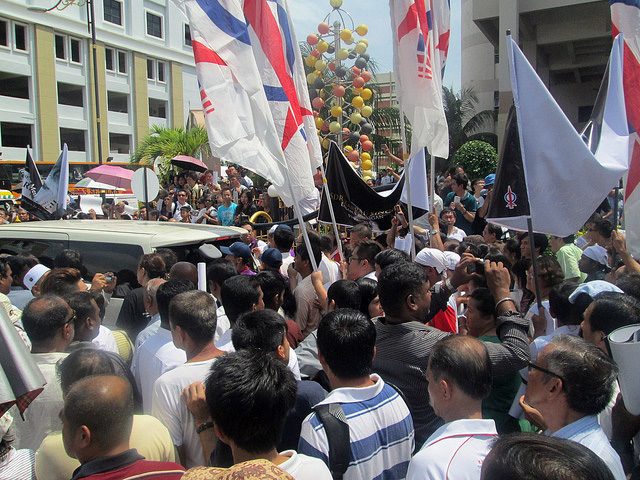 P Ramakrishnan writes a heartfelt letter to Karpal Singh, describing the astonishing outpouring of love and sorrow following the passing of this fearless champion of justice.

It is difficult to accept that you are no longer with us. For more than four decades you were part of the landscape of this nation and very much part of our lives. Today you are no more!

How well you were regarded by so many did not hit home until the crowd started coming in to pay their homage. They came even in the rain while you were in your coffin at home in an unending stream of humanity.

For three days they came, all day long, without any let-up. They continued to come at night as well. Many parked their cars far away and walked all the way to seek your resting place.

The titled personages as well as the humble, common person, they all came. From all walks of life, they came in reverence and with a sense of great personal loss.

They walked past your coffin, lingered a while to say a silent prayer, looked at your still, lifeless body and then they left the room teary-eyed and in an emotional state of shock and turmoil.

Many thousands came to your home, dear Karpal. The number was simply amazing and it was also very comforting to know that your struggle on their behalf was not taken for granted. Your struggle was truly and greatly appreciated.

It was a gesture of genuine appreciation for your life-long contribution for the welfare of the nation. It was a show of gratitude for your unwavering stand in the defence of truth and justice. It was a mark of their esteem for you because you provided a voice for the voiceless and the powerless.

Dear Karpal, as they continuously came and went, perhaps it is too difficult to put a figure on the number of people who came on those three days. But we all got the feeling that it was an impressive, huge crowd running into thousands that came to get a glimpse of you and convey their condolences to your family.

For those wondering why so many people came to your house, the banner outside your house said it all:

Karpal, you were always there for us
Now we are here for you

But, Karpal, impressive as the crowd was at your residence, it was nothing compared to the sea of people who turned up on the day of your funeral. It was a massive, emotionally-charged crowd that turned up on Sunday, 20 April 2014 at the Dewan Sri Pulau Pinang to bid their last farewell to you. For two hours they streamed past your coffin, grief-stricken and utterly devastated.

They came in grief to share their sorrow with your family. They wanted your family to know that it wasn’t only your family’s loss but theirs as well. They all wanted to be part of this great tragedy that had befallen the nation. They had to be there to bid farewell to you, on your final journey, dear Karpal.

These were common people from all walks of life who came, young and old, a multi-ethnic crowd, to be there for you. They stood in the sun and they stood with a heavy heart over their loss of a friend who gave hope and inspired them by standing up for the rule of law.

They remembered that you fought tyranny and oppression both in Parliament and in the Courts without fear or favour.

They were heart-broken, dear Karpal: their hopes were shattered in your untimely death. They mourned that their champion was no more with them to fight their battles.

Dear Karpal, they hugged your portrait and held it close to their hearts as to give meaning to the proclamation on a banner that read, “You will always be in our hearts.”

Your comrades in arms were there – all of them, looking solemn and sombre, with a forlorn look on their troubled faces. Your death had suddenly and forever severed the many decades of friendship – that was difficult for them to accept. How they suffered this loss!

In this greedy and unfair world where money seems so important, you acted pro bono for many without any consideration for their colour or creed because justice was blind. And you gave your all when you fought their battles. They remembered that as well, dear Karpal.

Anwar also revealed for the first time that you refused payment for taking up his marathon case. When Anwar’s family tried several times to pay you, you told Anwar to tell his family not to disturb you!

Three hotels recorded full occupancy, dear Karpal. The Waterfall Hotel, the nearest to your house, with 48 rooms – they were all taken up. The 231-room Continental Hotel, the nearest to the Sikh temple, was fully occupied. The Cititel Hotel had many friends and family members of yours checking into it. The hotel has 451 rooms, which were fully booked from Friday.

The florists on the island were all busy with activity as they received hundreds of orders for wreaths and flowers to be delivered to your residence. There was also an order for a bouquet which cost RM1,000! They all wanted to give you a floral tribute – it was another form of affection for you.

And dear Karpal, it is also said, “The life of the dead is placed in the memory of the living.” How true it is! They remembered you as a crusader, a warrior and a champion for truth and justice. You will live on in our collective memory.

With all these fond memories of your gallant fight to preserve Constitutional guarantees and to defend the Rule of Law, it is so difficult to bid you farewell, dear Karpal.

It is so hard to say good-bye, dear Karpal.