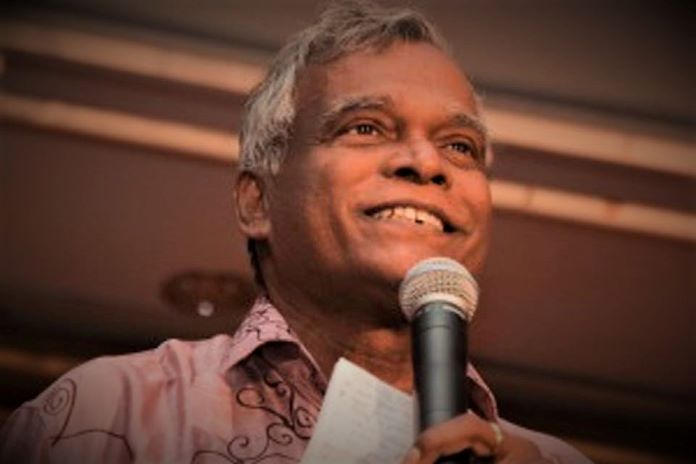 When I heard about brother Sinnappan’s death, my memories focused on a song:

Sinnappan introduced this song. We taught young plantation children this song – a song converted from the lyrics of the great movie Nayakkan.

Like this song, Sinnappan influenced the lives of many people through his services as a teacher, trainer and activist and through his talks, speeches, plays and writings. He was the full package, a reservoir of knowledge.

My activism is influenced by many people. Nasir and Selvam taught me about confrontational politics. Another big influence was in grassroots work, collective and participatory decision-making and the use of art.

There were many people who taught me as a student about the kind of society we need to build. Among them were people like Rani, Saras, Dr Kumar, Arumugam and others.

And one person who I believe was influential in their lives was Paul Sinnappan. Rani has this to say:

Sinappan was like ‘essential reading’ for aspiring community organisers, especially at a time, in the 1980s when the social activism landscape was muted and quite barren of social movements and resistance activity, unlike now.

Sinappan opened up the world of organising to novices like us then, stressing the importance of leadership – not the leader – and leadership values such as humility and respect for the people we were organising.

He taught us about enabling and empowering oppressed people. He introduced us to blue tac and mahjong paper and group dynamics and sessions that were fun, yet meant to inspire an alternative to the culture of poverty.

We learned from his humaneness. He spoke of and practised gender equality, and not just in sessions but at home. In his sessions, he smashed myths we had grown up with like caste, giving the historical perspective of it, and showing how the ruling classes used religion and the mass media to perpetuate such beliefs.

In my interaction with them and him, I started to understand many things: about the progressive element in religion – about liberation theology. I understood the importance of art and culture in building perspectives, gender perspectives, as well as working with the migrants and the marginalised. He was always consistent with his analysis of the class struggle. I think that is how our paths crossed.

It was because of him and his ideas that we started to organise makkal ponggal (harvest festival) in Kajang and the surrounding areas. We imported his ideas on cooking the ponggal together with the estate workers and did it as our annual event.

Sinnappan was such a resourceful activist. He was an excellent and brilliant trainer. He could do a session without boring you with facts and convincing arguments. He could sing, give examples and relate many stories, and much of this was based on his own experiences. He travelled a lot and shared his experiences. He had always something to share.

READ MORE:  A virtual event for the marginalised and oppressed

He was also a very pleasant person, always calm and composed, never declining time for a discussion and always full of interesting stories.

I knew him as a great advocate for credit unions and cooperatives and we worked together on the plight of the plantation workers. It was reported that his community-based credit co-operatives helped 64,000 families, assisting people in housing, health and education. That is a mega contribution.

The PSO was part of the Plantation Workers Support Committee. We took on many struggles, such as the monthly wage struggle, the demand to include plantations in the government’s rural development programme, and housing for plantation workers.

Sinnappan created a pool of activists such as Jalal, Rayappan, Susie, the late Krishnan, Rajasekaran, Arumugam, Francis and many others with whom we are still working.

My early recollection of Sinnappan was when he was doing a session using old newspapers and asking us to express ourselves. A small boy was with him then, and he was drawing an oil palm tree. That boy was his youngest son, Sinnappan told us. That boy is the Arul Prakkash we know, an activist with Komas and Bersih.

Arul Prakkash wrote: “He’s my inspiration to work for the poor, marginalised and fight oppression. I believe he touched and inspired many others too. Appa, rest in peace. I will continue your fight.”

Yes, Sinnappan touched and inspired many and played a role in the formation of many activists. Our deepest condolences to his wife Pappathi, twin brother Rayappan and family members. PSM [the Socialist Party] has lost a good comrade, community organiser and great resource person.