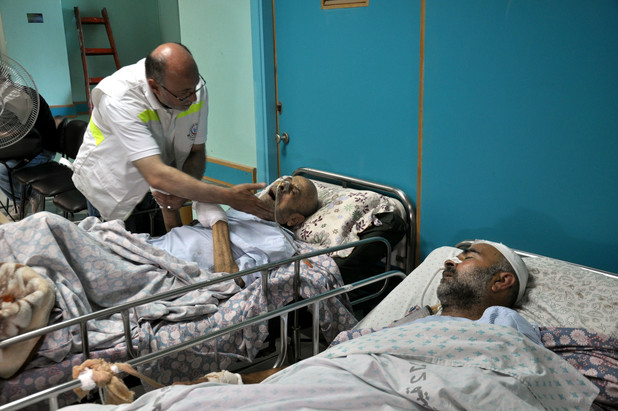 Unlike their demonisation of Putin and Russia, many Western presenters know precisely how far to tread when it comes to ‘criticising’ Netanyahu, Israel and its Western protectors, writes John Hilley.

The ‘most moral army in the world’ have bombed two hospitals in Gaza, El-Wafa and Al-Aqsa, killing doctors and patients lying in intensive care unit beds. That, in itself, should be enough to see Israel vilified by the ‘international community’.

Yet, with over 600 now dead, the vast majority civilians, families, children, it seems that even the deliberate murder of sick people in hospital wards can be allowed as the ‘unfortunate consequence’ of Israel’s ‘right to defend itself’.

The admirable Dr Mads Gilbert has talked about how Al-Shifa hospital is managing to go on in the face of Israel’s wicked onslaught. He commends the enduring, determined spirit of the Palestinian people. Dr Mads is a shining example of caring humanity.

In shameful contrast, Obama, Cameron and most of the Western political class remain loyal to Netanyahu. Not even the wilful shelling of hospitals could invoke a moral or political about-turn. Indeed, the US Congress has just voted 100-0 to continue supporting Israel.

Predictably, calls for an arms embargo against Israel have also been been shunned. And how could it be otherwise, with America and Britain up to their necks in running guns and arming Israel.

Complementing the political silence, Gaza has been editorially relegated down the ‘news’ table. At the top, every facet of the Malaysian plane disaster has been seized upon, as, following the establishment line, the BBC and other media turn the screw on Russia.

The murder of innocents on a passenger plane is, of course, worthy of serious political and media attention. But why has this story, the issue in Eastern Ukraine and vilification of Putin superseded the story of Israel’s mass atrocities in Gaza?

Just what more, one wonders, must befall an already bombed and massacred people before the West and its service media mount the same indictment and denunciation of Netanyahu and the Israeli state?

The demotion of Gaza and the cosy consensus on Ukraine/Russia can be seen in almost every selected ordering of BBC news.

Alongside its main news programmes, Newsnight, for example, has headlined and pored over every detail of the plane crash, the ‘diplomatic fallout’ and Putin’s ‘culpability’, while Gaza gets the ‘and now in other news’ treatment.

Last night’s edition was a case in point. The leading story and bulk of the programme covered the plane issue and multiple angles on Russia’s implied ‘blame’ (despite the US itself announcing “no direct [Russian] involvement”). This was followed not by Gaza, but, continuing the ‘focus on deviant Russia’ theme, a major feature and interview with the wife of murdered Russian dissident Akexander Litvinenko. It then returned to the plane story with a long piece from the Netherlands on tributes to the bereaved and an interview with a Dutch MEP in which presenter Kirsty Wark explored the possibilities of imposing greater sanctions on Russia.

When we finally got to Gaza – slotted-in before some polite BBC ‘self-examination’ (featuring Sir Peter Bazalgette, President of the Royal Television Society and former producer of Big Brother) on whether the faces of dead people should be shown on TV, and a piece on Fifa corruption and England’s World Cup woes – there was no film report from Gaza, just the briefest resume of unfolding events, headed by news of the US suspending flights to Tel Aviv because of a Hamas rocket, and mention of the death toll. Noting that Kerry and Ban Ki-moon were heading for more ’rounds of talks’, Wark went straight to US ‘peace negotiator’ and former US special envoy Martin Indyk, all too typical of the pro-Israel diplomat class given prime attention by Newsnight.

A flavour of the exchange:

Wark: You left just three weeks ago, and when you left you said you were battered by the whole situation. Did you simply give up?

Indyk: [patronising laugh] I said battered but unbowed. No, we didn’t give up. We reached a point where the parties themselves gave up. The Israelis suspended the negotiations because the Palestinians had decided to reconcile with Hamas, which is not interested in negotiations and devoted to Israel’s destruction, so there wasn’t anything more that we could do…

Wark: But if you thought it was hopeless three weeks ago, what do you think of it now? Do you think the Israelis were right to start this offensive in Gaza?

Indyk: They didn’t start the offensive…

Wark: [stumbling] Sorry, to take the offensive into Gaza with a ground invasion, and air power as well.

Indyk: Yeah, the offensive was started by Hamas rockets into Israeli cities…

Wark: You talk about chronic conflict. The figures are more than 600 dead on the Palestinian side, more than 30 dead on the Israeli side. But let’s just look at these UN figures. Of the Palestinians who have died, the UN says 75 percent are civilians, we’ve got 25 from one family, 100 children, two hospitals. Is that disproportionate?

Indyk: You know, I’m not here to offer judgement on these kinds of things…

Wark: But people are making judgements. The French foreign minister has called it a massacre and the opposition leader Ed Miliband in Washington said that Israel was wrong to go into Gaza. Do you think that Israel should have held back this time?

Indyk: Look, I don’t know what you want from me, I’m not here to make judgements on either side…

Wark: But you’re a man who knows the area well…

Indyk: But let me finish my answer…I do not believe that…Netanyahu was a man who wanted to go into Gaza on the ground, he was seeking ways to achieve calm before that, but the rocketing of Israeli cities and the attacks through the tunnels were such that it got to the point where he couldn’t get a ceasefire, so he decided to move in and try to destroy the tunnels…

Indyk ends with more ponderous rhetoric on the ‘need for peace’, a ceasefire and the ‘key issue’ of how to stop Hamas rockets.

So much for someone ‘not here to offer judgement on these kinds of things’.

But what of Wark’s own judgement of these issues? On the surface, we heard her citing the humanitarian crisis, the disproportionate killing and a certain international concern. But consider the much more vital points Wark could have put to Indyk.

She could have confronted him on America’s direct arming and consistent support of Israel, its posture as a ‘neutral’ actor in a spurious ‘peace process’, and Indyk’s own questionable role as a ‘peace envoy’.

She could have reminded him that it is Israel which has repeatedly violated the 2012 ceasefire by relentlessly killing farmers, fishermen and other civilians in Gaza.

She could have asked him why the Palestinians should accept a stitched-up ceasefire and return to the same state of imprisonment without any prospect of change.

She could have reminded him that Gaza remains under military lockdown and an illegal siege, as defined by the UN. She could have specified the settlements and the Occupation.

She could have pointed out that, contrary to Indyk’s apologetics for Netanyahu, this latest offensive was, indeed, initiated by Israel as a deliberate exercise to break the Hamas-Fatah unity government.

Rather than ask if Israel was wrong to go into Gaza ‘this time’, she could have asked whether there had ever been a ‘right time’ for such murderous attacks and gross violations.

Why, also, the vital concern over whether such aggression makes Israel, rather than Palestine, ‘more secure’?

And, unlike the previous discussion on Russia’s punishment and her suggestions to the Dutch MEP on planned sanctions, Wark could have specifically asked Indyk what kind of emergency international punishment should now be enacted against Israel, including the options of deep sanctions and an arms embargo.

Precisely none of this was mentioned, for unlike the demonisation of Putin and treatment reserved for official enemies like Russia, presenters like Wark know precisely how far to tread when it comes to ‘criticising’ Netanyahu, Israel and its Western protectors.

Glasgow-based Dr John Hilley is the author of Malaysia: Mahathirism, Hegemony and the New Opposition (London: 2001). He blogs at johnhilley.blogspot.com