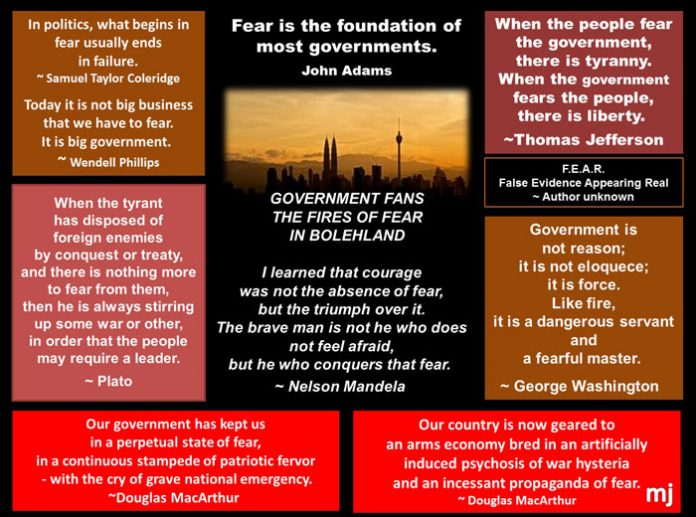 The unhealthy mindset exhibited by certain groups to win control at all costs will have a great negative impact on the younger generation of voters, says Syerleena Abdul Rashid.

Those in the corridors of power know that our country is not under any kind of threat.

They also know that a large majority of Malaysians regardless of ethnicity, religion and gender support the liberties bestowed upon us by our great federal constitution – even if it has undergone numerous amendments and omitted certain important details which made it rather different than its original intention.

In the midst of calls to foster greater union and camaraderie among citizens of this federation, there are those in high positions who continue to contradict calls for “social unification”.

We have established that spreading hate, lies and inseminating the seeds of suspicion has always been their forte. However, injecting ever so banal inflammatory rhetoric of chaotic and uncouth cultural traditions into society hits below the belt.

The recurring use of hate-filled commentaries and the need to instil fear in society is a calculated move aimed at distracting and dividing Malaysians by suggesting that law-abiding citizens are “freedom-hating dissidents” threatening our values and destroying our peace.

Hence, conjuring up a phantom menace and implying that minorities will one day reign over this federation with their ‘communist’ ideologies or that ‘liberals’ will pave the way to decadent debauchery or, God forbid, the rights of certain ethnic groups in this country will be taken away.

Such exaggerations exist only because those in power hope to pit Malaysians against one another and may have succeeded (for now) through decades of misinformation intended to keep us ignorant.

READ MORE:  No cheer as government buckles in Timah furore

It is a clever manoeuvre, one that has survived the test of time – let people unite under a common enemy and in this context, the opposition, activists, academics, feminists, liberals and minorities are seen as the state enemy.

There is no denying that all forms of hatred are unacceptable and repulsive. However, when intertwined with politics, these messages have a far greater impact on a nation.

Such messages strike at the core of our democracy and are nothing more than a sophisticated form of malicious propaganda.

Rather than identify real problems leading to regression or why corruption is rampant, the continual invocation of unrest is meant to invent fear and anxiety with almost no regard to the pressing issues faced by the average Malaysian.

Tolerance and respect do not require that one endorse or pursue the cultural traditions or religious practices of others, but demand that we withhold from insulting those with whom we disagree or those a little ‘different’ from us.

Malaysians need to break away from the politics of hate and find a middle ground that can appreciate discussions and debates in a more respectful, constructive and intelligent manner. There is no denying that there is a dire need to respond to religious, cultural and ethnic pluralism in line with modern democratic practices, one that endorses assurances of civility, decency and tolerance.

A majority of Malaysians understand that local politics is and always has been about playing the race and religion card, which subsequently is about the elections – who the masses vote for and the coalition Malaysians trust the most.

But the unhealthy mindset exhibited by certain groups to win control at all costs will have a great impact on the younger generation of voters.

Our responsibility now is to encourage the politics of mutual respect. We need to find a way to make politics interesting, insightful and worthwhile to the next generation of leaders and not let the haters get the best of us when they spew bigoted views.

No matter how ridiculously banal such rhetoric can be.