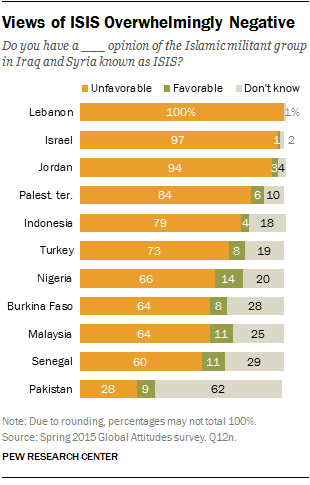 Continuing to deny the rise of Islamic extremism and merely hiding behind proclamations of being a moderate Islamic state is a sure path towards disaster, says Wandering Malaysian.

The transport minister (and mind you, not the home minister/deputy prime minister) says there are at least 50,000 sympathisers of the Islamic State (IS) militants in Malaysia.

He also said around 100 Malaysians are fighting in Syria and Iraq with the IS. Others estimate around 200 or more Malaysians who are actively fighting alongside IS militants.

Over the past couple of years, at least 120 Malaysians have been arrested either trying to join IS or returning from fighting with IS. A recent leaked police memo highlighted the risk of suicide bombers running around KL. More revealing is a recent Pew survey of support for IS in Malaysia as shown above.

If this poll is to be taken at face value, people having a favourable view of IS in Malaysia at 11% of the population is amongst the highest compared to other predominantly Muslim countries. Despite the widespread media coverage of IS, a shocking 25% of Malaysians surveyed did not have an opinion on IS. It is likely that a proportion of these Malaysians did not want to share their real views on IS for whatever reasons.

But the problem is more deep rooted. Umno has shamelessly exploited Islam to stay in power in an attempt to out-Islamicis Pas and to disguise the rot within. Islam will never condone the corruption and abuse of power that is at the core of UMNO. Pas itself is nebulous about IS and has never taken a clear stance against Islamic extremism.

While the prime minister has recently taken a supposedly strong public stance against IS, he was also the one to encourage Malaysians to emulate the bravery of IS fighters in Iraq. Witness his pandering to Pas in the last Umno general assembly and his pathetic attempts to bolster his Islamic credentials in his speech.

This hypocrisy has to stop, and both Pas and Umno should stand up and declare publicly their respective positions on Islamic extremism. Malaysian Muslims need to face head on the challenges of global Islamic extremism and address these in a thoughtful and honest way bearing in mind that they live as part of a multiethnic and multireligious society.

This soul-searching is best conducted through open and honest discourse amongst reasonable people and not dominated by dictates and diatribes from the self-annointed clerics.

Continuing to deny the rise of Islamic extremism and merely hiding behind proclamations of being a moderate Islamic state is a sure path towards disaster.