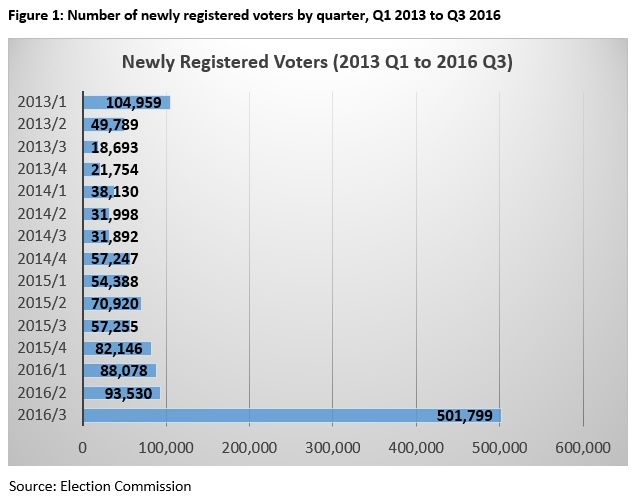 Ong Kian Ming is concerned that voter registration activities may not be conducted on a level playing field.

There are many reasons for the record number of newly registered voters in the third quarter of 2016. Many voters visited post offices to register themselves upon hearing the rumour that the registration deadline for the 14th general election, were it to be held in March 2017, was 30 September, 2016.

There was also an increase in voter registration activities, organised by political parties and various NGOs, in cooperation with officials from the Election Commission.

With civil servants making such a large percentage of the assistant registrars, one cannot help but be concerned that some of them from departments such as Jasa, the Ministry of Information’s propaganda unit, are being used to register voters selectively, especially in the marginal parliamentary and state seats.

In order to reduce the public’s fears that some of these assistant registrars are not abusing their status, the Electoral Commission should publish a detailed breakdown of the number of new voters registered by civil servants according to department, by individual political parties, by student representatives in each university and by each NGO.

In addition, in order to level the playing field, the commission should once again appoint representatives from political parties to be assistant registrars especially since the commission themselves are often short-handed and cannot spare the time go to places such as pasar malams at night to register new voters.

Better still, if the government can agree to Bersih’s demand of automatic registration of voters when they reach voting age, then doubts about the number of newly registered voters can be significantly reduced.

Dr Ong Kian Ming is the member of parliament for Serdang.