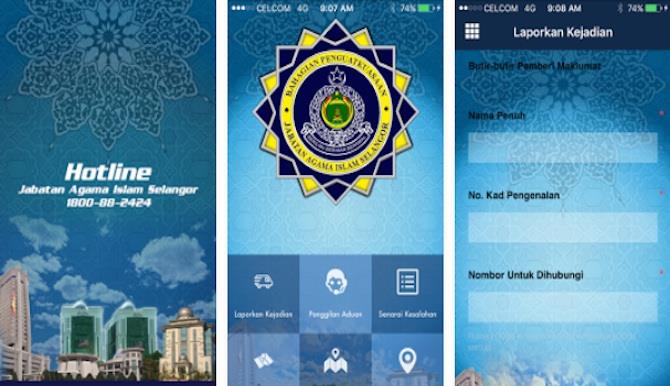 Rampant corruption, jarring income inequality and deforestation are among the serious moral issues that should not escape the attention of religious bodies such as Jais, says Mustafa K Anuar.

In an apparent frenzy to burnish Malaysia’s Islamic credentials, the Jabatan Agama Islam Selangor (Jais) has recently resorted to modern communications technology to encourage Muslims to help police the morals of the Muslim community.

A mobile app – called Hotline Jais – that is available on Android devices enables members of the public to report suspected Sharia-related crimes such as khalwat (close proximity) and “deviant Islamic teachings”, at a faster rate. In other words, the kind of reporting that is supposedly driven by the spirit of amar makruf nahi mungkar (urging on what is good, and rejecting evil).

Such an innovation also means that Jais is relying on vigilantes among members of the public to help monitor – and catch – potential offenders of Sharia. Therein lies the rub.

This modus operandi might also attract voyeurs (some of whom probably have no life of their own) in our midst to undertake the task of monitoring suspected promiscuous couples in particular. And the overzealous might even overstep their prescribed role and consequently take the law into their own hands to shame the suspects especially if their motives are emboldened by the thought that they are on divine track.

There is also a danger when ‘immorality’ is defined very narrowly – and this often only relates to sex – by certain people; some people might be wrongly stalked and caught for reasons justified only by a certain group of vigilantes whose interpretation of Islamic morality is severely strict and limited.

To be sure, moral policing is not peculiar to Malaysia. Other Islamic countries also indulge in such a practice and employ a section of their police force to undertake this purportedly religious mission. A cursory look at their activities would be instructive.

In Iran, for example, the undercover Gasht-e Ershad (Guidance Patrols) agents are tasked to report to the police suspected violations of the country’s Islamic code of conduct in public, particularly the wearing of the hijab among women. As a response, the well-heeled have created an Android app to help them escape Gasht-e Ershad checkpoints.

The Public Order Police – created in 1993 – in Sudan function to enforce the Sharia and are empowered to arrest and try suspects hastily in so-called public order courts. Private mixed-sex events are known to have been shut down by this police force; women reprimanded for their “immodest dress”; and businesses perceived as violating the Sharia are raided.

And the Mutawa (the Committee for the Promotion of Virtue and the Prevention of Vice) in Saudi Arabia is tasked to report to the police suspected cases of transgression of the Sharia in public places particularly those involving male-female interaction and women’s dress in public. Examples of excessive actions of the Mutawa (according to a BBC report): an actor was charged for taking selfies with his fans and a female mannequin was seized because of its ‘unIslamic’ clothing.

As we can see from the above, the actions of these morality police have serious implications of largely depicting Islam as mainly punitive and are in gross violation of human rights and democracy especially in a multi-ethnic, multicultural and multi-religious setting such as Malaysia.

Additionally, the politically and economically powerful may have the wherewithal to insulate themselves from such religious scrutiny.

Not surprisingly, this purportedly religious endeavour of Jais has invited brickbats from sections of Malaysian society who are concerned about possible violations of human rights and privacy of individuals and blatant abuse of such vigilante enterprise.

If modern communications technology is to be used in a more beneficial and intellectually stimulating manner in the long run to forge a morally upright society, then it would be constructive for Jais to utilise this technological platform for educational and persuasive purposes as opposed to putting too much stress on punitive measures.

In this regard, Jais could, for instance, create an app that allows for members of the public to register with it so that they could receive alerts and information from Jais.

But first, there is a dire need for Jais to expand the scope and definition of “immorality” if its main emphasis hitherto is merely on matters pertaining to the physical relationship between the opposite sexes who are not related to each other and to women’s dressing.

The morality of a person should be judged against, for instance, how he or she treats fellow human beings, animals and Mother Nature. Do values of compassion, justice, freedom etc inform their behaviour?

Hence, if there are cases of certain individuals exhibiting bad behaviour that is brute, uncouth and, worse, violent in nature to the point of potentially creating social disorder and especially runs counter to Islamic tenets and democracy, then it is incumbent upon Jais to make an informed stand on this matter – and notify the general public via the app – so that it would be a good lesson for others committed to their Islamic faith. In this regard, certain group of people wearing T-shirts in red come to mind.

To make such religious observation and commentary on the part of Jais (and other religious bodies) is obviously in the spirit of amar makruf nahi mungkar (urging on what is good and rejecting evil).

If in Islam human beings are indeed God’s trustees on Earth or khalifah, then they are obliged to passionately care for Mother Nature. That is why deforestation and indiscriminate logging, for instance, are not only acts that brings about environmental degradation and deprivation of the indigenous peoples of their rightful ancestral land, but they also reflects human selfishness because the culprits squander the future of our future generations.

Thus, the massive deforestation that occurs in Kelantan, for example, should be on the radar of Jais so that the religious body can alert fellow Muslims and others about the immorality of such rapacious activities.

In a sense, making commentary on such incidents makes religious teachings relevant to the contemporary world and provides intellectual input on socio-economic, cultural and political matters – while at the same time it helps Muslims keep true to their religious beliefs.

The vulgar socio-economic disparity that sticks out like a sore thumb in our society should also be the kind of immorality that pricks the conscience of many, including those who represent Jais. For the contradiction between, say, those who religiously splurge on very expensive luxury items and those who can’t even have enough food on the table is too jarring and unconscionable.

Corruption, which unfortunately has become part of our political culture, should not escape the attention of religious bodies such as Jais. Money that is stolen from state coffers is not only bleeding the government administration but also deprives the downtrodden and the marginalised in society of proper healthcare, quality education and clean water supply.

Such theft is clearly immoral enough to earn the wrath of the religious establishment and concerned citizens, Muslim and non-Muslim alike.

Surely, it would be highly immoral to restrict the question of morality to mainly matters of sex and women’s dressing.