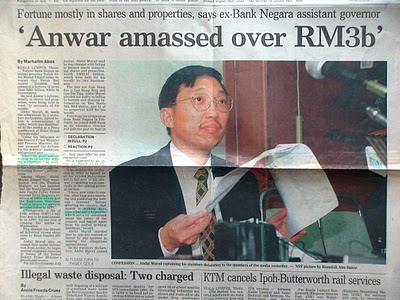 Former Bank Negara assistant governor, Abdul Murad Khalid, has testified before a Royal Commission of Inquiry into Bank Negara’s forex losses that took place more than two decades ago. The name Murad rings a bell. Aliran had its own encounter with Murad in 1999, at the height of Reformasi, just over a month before a critical general election on 29 November that year.

In a statutory declaration on 26 October 1999, Murad, who had resigned under a cloud from Bank Negara earlier that year, claimed Anwar Ibrahim had channelled large sums to various parties, including RM5m to Aliran and Chanda Muzaffar, out of slush fund assets totalling RM3bn. Murad alleged that during the years 1992 to 1997, Anwar was making use of Aliran to further his influence.

An outraged Aliran then sued Murad. The matter was later settled out of court – not long before it was due to be heard.

Our then treasurer Subramaniam Pillay also responded to Murad in a piece titled ‘A total lie’, which was published in Aliran Monthly in 1999. Read the full story here.